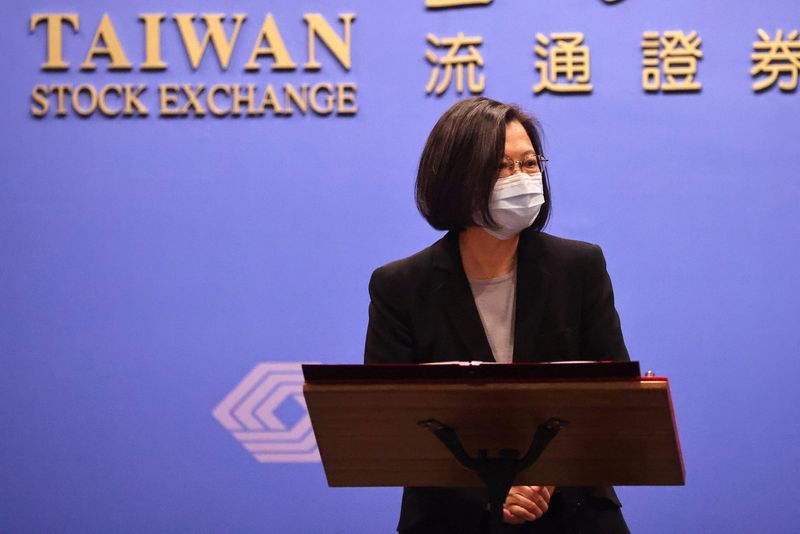 TAIPEI (Reuters) – Taiwan President Tsai Ing-wen wished China a happy Lunar New Year on Tuesday, but said she would not yield to Chinese pressure and reiterated a call for dialogue to resume with Beijing, which China rejected.

China, which claims democratic Taiwan as its own territory, has increased its military activity around the island in recent months, responding to what Beijing calls “collusion” between Taipei and Washington, Taiwan’s most important international backer.

Speaking after a meeting with senior security officials, Tsai said Taiwan was in close contact with “relevant countries” about the situation in the Taiwan Strait, which separates the island from its huge neighbour.

Chinese military aircraft and warships operating around Taiwan are not conducive to peace and stability in the Indo-Pacific region, she added.

“I would like to reiterate that Taiwan’s consistent position on cross-strait relations is neither to succumb to pressure nor to advance rashly when we get support,” Tsai said.

Taiwan wants “meaningful talks” with China on the basis of equality and mutual respect, as long as Beijing wants to ease the stand-off, she added.

“Cross-strait peace is not a unilateral issue for Taiwan. The key lies in China’s hands. Historical experience has proven that verbal attacks and military threats against Taiwan will not help cross-strait relations.”

“The current severe situation in cross-strait relations is entirely caused by the Democratic Progressive Party authorities,” it said, referring to Taiwan’s ruling party.

Tsai has repeatedly said Taiwan is already an independent country called the Republic of China, its formal name.

Taiwan and China this week both mark the Lunar New Year, traditionally the most important holiday of the year for both, marking the arrival of spring.

“We would also like to wish the people on the other side of the strait a happy new year and hope to jointly promote peace and stability on both sides of the strait,” Tsai said.