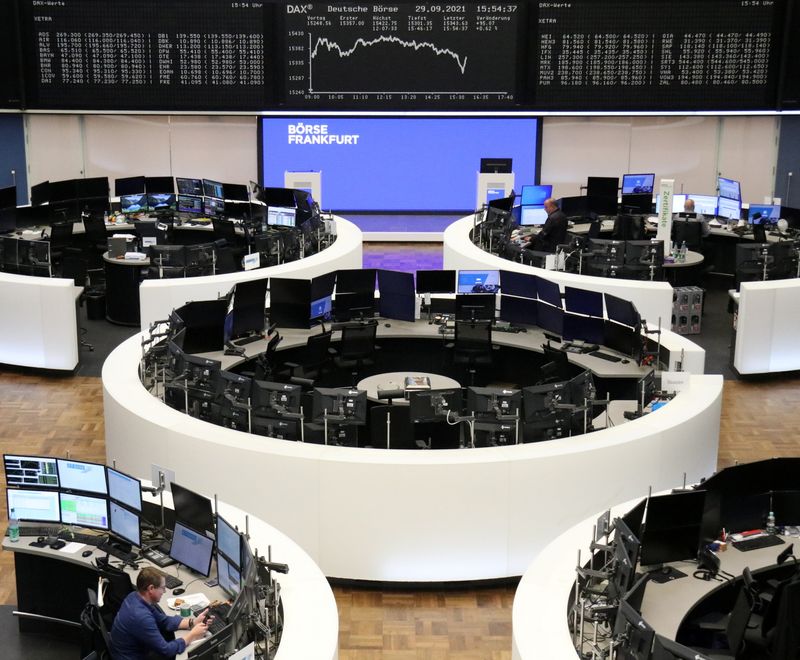 (Reuters) -European stocks struggled on Monday after their worst weekly showing since February, hit by a growing number of risks including signs of inflation, elevated bond yields and developer China Evergrande’s financial troubles.

The pan-European STOXX 600 index fell for a third straight session, down 0.5%, holding near 11-week lows hit in last week’s selloff.

A move into the black during the session on a materials stocks rally was outweighed towards close as falls in technology stocks intensified after peers on Wall Street were pressured by an uptick in Treasury yields. [.N]

Banks and luxury stocks also lost on fears of a slowdown in global growth, as China, the world’s second largest economy, deals with fresh COVID-19 restrictions, a property sector slowdown and regulatory clampdowns.

French luxury goods makers Kering and LVMH, which draw a major portion of their revenue from China, fell 1.3% and 1.4%, respectively.

“Investors should brace for more stock market volatility throughout October, which is also a seasonally turbulent time for stocks, as worries about inflation, supply chain issues, China and (U.S. Federal Reserve) policy are still with us,” Jay Pestrichelli, chief executive of investment firm ZEGA Financial, said.

A survey showed investor morale in the euro zone fell to its lowest level since April in October on dimming economic expectations.

STOXX 600 has dropped about 5% from a record high hit in August due to signs of slowing growth and inflation. BofA Global Research last week predicted a nearly 10% drop by year-end, given a shift in the macro backdrop towards “anti-goldilocks”.

BT expects Sky to need to use the telecom provider as its partner for full fibre services, a person familiar with the situation told Reuters.

Airline stocks including Ryanair and British Airways-owner ICAG rose 3% and 0.1% following reports that the UK will open up more countries for hotel quarantine-free travel later this week.

Global airlines on Monday projected a sharp reduction in industry losses next year, but revised up the financial toll inflicted by the pandemic.