You probably know Tevye, the father torn between tradition and his daughters’ happiness, from the hugely successful Broadway musical Fiddler on the Roof. But the show was only a snapshot in the life of a man created by Sholem Aleichem, who wrote several stories starring him — and there are many more surprises in the new Off-Broadway play Tevye Served Raw.

“Fiddler was Broadway-ized and made safe for its time,” says Allen Lewis Rickman, the director, translator and star of Tevye Served Raw, which opened at The Playroom Theatre and has been extended thanks to popular demand at the Museum of Jewish Heritage. “The original stories are more authentic and were about what life was like in tsarist Russia. These stories parallel with Fiddler, but are very different. Half are dramatic, and the other half straight comic — Aleichem was a brilliant humorist.” 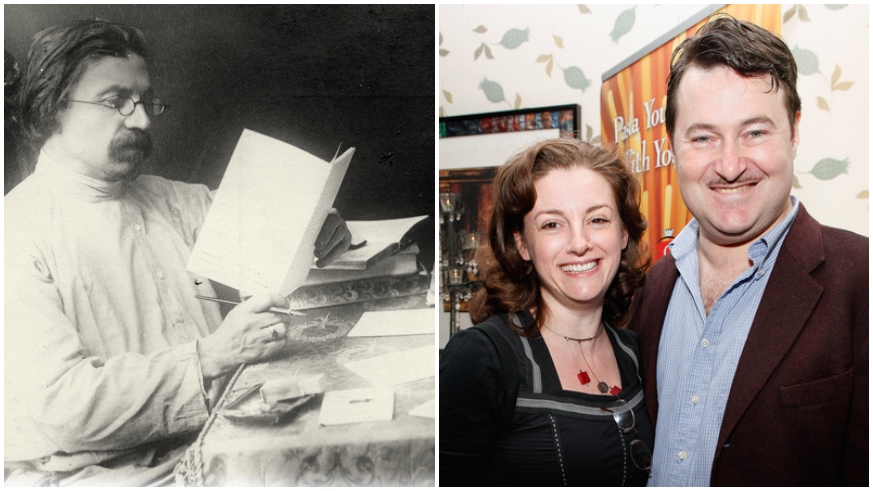 Aleichem’s stories about life in the shtetl, a Yiddish community in Russia during the 1800s, were most famously adapted into the 1964 musical. Fiddler on the Roof won nine Tony Awards and remains the 16th longest-running Broadway show of all time. Tevye Served Raw is not a sequel — think of it as the unvarnished version of Fiddler. The play adapts five Tevye stories, offering a more honest depiction of life in the shtetl, but also the rich humor that runs through Aleichem’s work.

The production stars Rickman and his real-life partner, Yelena Shmulenson, who you might know as the Yiddish-speaking couple from the Coen brothers’ A Serious Man, and Shane Baker. Rickman, whose considerable credits include a recurring role on Boardwalk Empire, also translated the Yiddish text into English (there are also Yiddish-English supertitles), which ended up being the hardest part. The play is performed in Yiddish, with English supertitles.

“He wrote ripe, colorful characters, but also the stories have the joy of the language: rich, flavorful words and a great atmosphere,” he says. “The original Yiddish has so much color and musicality. It’s hard to keep the inflections and keep the meaning, but it works well. We all speak Yiddish and have that musicality between us.”

The timing of the play’s off-Broadway debut couldn’t be more relevant, Rickman says, as audiences are ready to take a second look at the original work and hear a less homogenized story.

“These are the authentic stories and the word I would use to best describe them is ‘raw.’ Fiddler was written by modern Americans. They grew up here, in a less hostile civilization. In tsarist Russia, two different civilizations were living side-by-side and the life of Jews was the equivalent to black Americans in the Jim Crow South.

“Today,” he adds, “there’s more openness, and a longing for authenticity as people are searching for their roots. This is real: It’s a photograph of life as it was.”