One of the most popular European river itineraries begins in Amsterdam and ends in Basel, cruising primarily on the Rhine River in Germany.

It’s an unforgettably scenic journey that can be done virtually anytime between the beginning of the main river cruise season in April through Christmas market season in December. You’ll visit cities in Germany, France and Switzerland, getting to see some picturesque and historic destinations, not to mention the opportunity to sample excellent cuisine and wine since the cruise goes through the heart of Germany’s main wine region.

I experienced this off-season earlier this year on Viking River Cruises‘ newest ship Viking Hild, when the crowds still weren’t excruciatingly large and when hearty German and Alsatian specialties hit the spot after a chilly day of sightseeing. 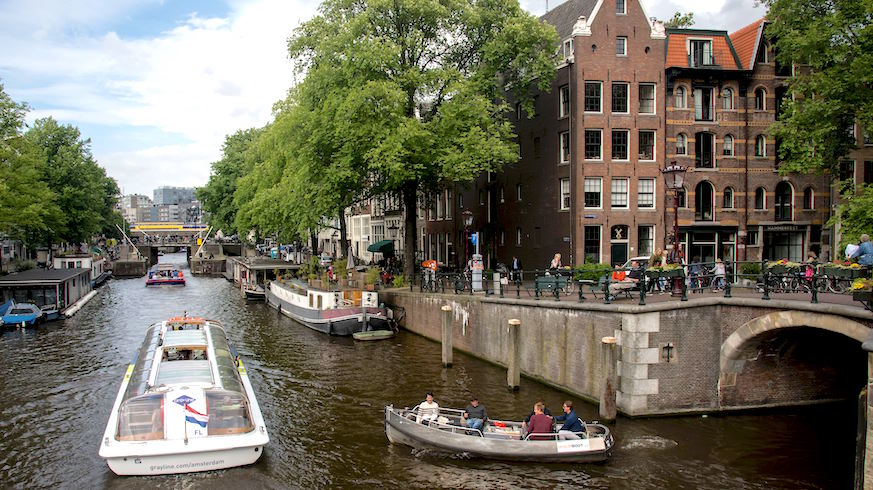 Most Rhine cruises either begin or end in Amsterdam, which is also a convenient gateway to Europe, not to mention one of the Netherlands’ most fascinating cities. Amsterdam is famous for its canals and as the hometown of Rembrandt; a don’t-miss attraction is the magnificent Rijksmuseum, which is filled with the artist’s work of as well as other Dutch Masters.

If you aren’t into art, then a visit to the sobering Anne Frankhuis will give you insight into the lives of the young girl and her family who sought refuge from the Nazis at the outbreak of World War II in a secret apartment above her father’s business.

If you are lucky enough to have a cruise itinerary that stops at or near Kinderdijk in the Netherlands, you’ll have the opportunity to see the UNESCO World Heritage-designated windmills that used to pump water out of the Alblasserwaard polder, an operation now accomplished by a modern pumping station (which is also worth stopping by to see). Keepers still live and work in all the windmills, and the 19 windmills here are kept in working order.

You can also walk along the paths and visit them (at least one interior will be open on any given day). You’ll also see a presentation on the history of windmills in the Netherlands in the visitor center.

INSIDER TIP: The windmills don’t operate every day of the year, but they almost always turn on Saturday afternoons in July and August (as long as there is wind), on National Windmill Day (the second Saturday in May), and on National Monuments Day (in mid-September).

Without a doubt, the magnificent Gothic Dom (cathedral) in Cologne, Germany, is a highlight of any visit to Europe. Begun in 1248, the cathedral wasn’t finished until 1880. The two towers were briefly the tallest structures on Earth. If you don’t care for grand churches, then the largest city on the Rhine offers myriad opportunities to wander and shop. Try some of the local Kölsch beer. The city was mostly destroyed during World War II, so the rebuilt Old Town is actually a mishmash of old and new, but it’s an atmospheric and interesting place to stroll.

INSIDER TIP: Eau de Cologne No. 4711 was invented here in the 18th century by chemist Johann Maria Farina. His company, Glockengasse is still headquartered here, and its flagship store still sells its perfumes and has a historical exhibition.

Sitting at the confluence of the Rhine and Mosel rivers, Koblenz is famous for the grandiose Deutsches Eck (Germany Corner), a giant statue of Kaiser Wilhelm I from 1897 right at the confluence. More interesting is Festung Ehrenbreitstein, Europe’s largest fortress, which stands on a towering cliff on the opposite side of the river.

INSIDER TIP: The best way to reach the fortress is on the Seilbahn (cable car) that leaves a few hundred feet down the river from the Deutsches Eck. It offers magnificent views during the crossing and can carry some 7,000 passengers per hour during the busiest parts of the year.

Rüdesheim was popularized by the Romantics of the early 19th century because of its solitude. One need not worry about that any longer since the German town has long been discovered and is a busy tourist center for the wine-growing region. Still, it’s a particularly charming place with medieval alleys (stroll along the Drosselgasse) and lots of weinstube for drinking. There’s even a wine museum in a castle.

INSIDER TIP: You may not want it in the summer when a glass of Riesling is more refreshing, but when the weather cools down, try a Rüdesheim coffee, with brandy, sugar, and whipped cream.

Picture-perfect Braubach has a lovely main square lined with half-timbered houses, so if you just want to hang out and experience the Medieval atmosphere, it’s there aplenty. However, on a hill above the town is Marksburg Castle, the real draw. Now home to the German Castle Association, it’s stood since the 12th century and (alone among the 40-some castles between Bingen and Koblenz) has never been destroyed, though it was damaged by American artillery at the end of World War II.

For the rest of the best things you’ll see on a Rhine River cruise, including Germany’s most highly prized wine region, visit Fodor’s.