The beer lover’s guide to drinking in New York City

The craft beer scene in New York City and beyond hasn’t been this hopping since Prohibition — in the five boroughs alone, there are nearly 40 breweries across making incredibly diverse beers. So why drink something you can have anywhere, or go to just any old bar? The ultimate beer drinking experience requires something more than the right brew in front of you. We’ve rounded up the best places for beer lovers in the city, where you’ll find good food, entertainment and a lively crowd along with a great selection of brews. 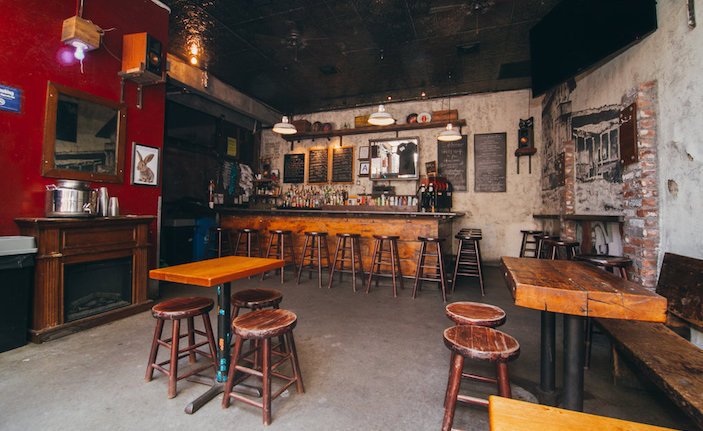 You might be dubious about the graffiti-covered hallway, but follow it to the sunny indoor-outdoor craft beer haven that is Mission Dolores. You won’t find a more ride-or-die bar for promoting the beers of the Northeast, from Vermont to Maryland and plenty of entries from upstate New York’s own thriving scene. Spacious but with tables small enough so you don’t have to share, the spacious courtyard is super dog-friendly and while they don’t serve food, you’re welcome to bring your own from any of the great restaurants nearby. 249 Fourth Ave., Brooklyn, missiondolores.com 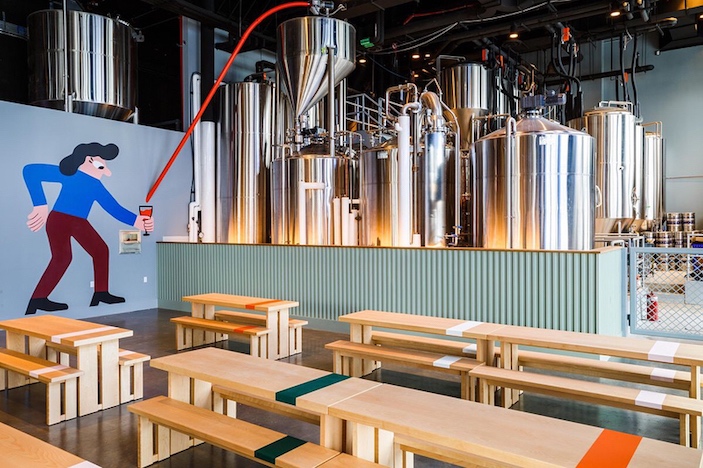 Citi Field is already New York City’s best food hall, and now it’s added a brewery to the roster. Tucked beneath right field and accessible without a ticket, Mikkeller Brewing NYC is the new Queens home base of one of the world’s best-loved breweries and the ultimate sports bar for Mets fans. Pull up one of the many seats in the 10,000-square-foot taproom and spend many happy innings sipping through the 60 craft beers on tap (yes, there are baseball-themed brews) alongside an eclectic food lineup of ballpark favorites and Danish nosh by chef Claus Meyer. Citi Field, between the Bullpen and Right Field gates on 126th Street, mikkellernyc.com 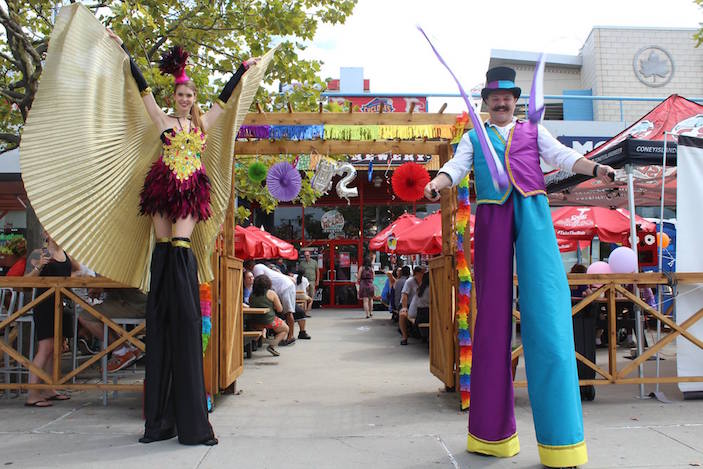 When you open a brewery next to Brooklyn’s amusement park by the sea, you’d better bring the fun. Coney Island Brewery has definitely carved out its own beer identity with fun flavors like the Cotton Candy Kölsch served on its large shaded front patio for when you need a break from the summer sun. They even have their own “ride” — a free tour of the brewery. 1904 Surf Ave., Brooklyn, coneyislandbeer.com 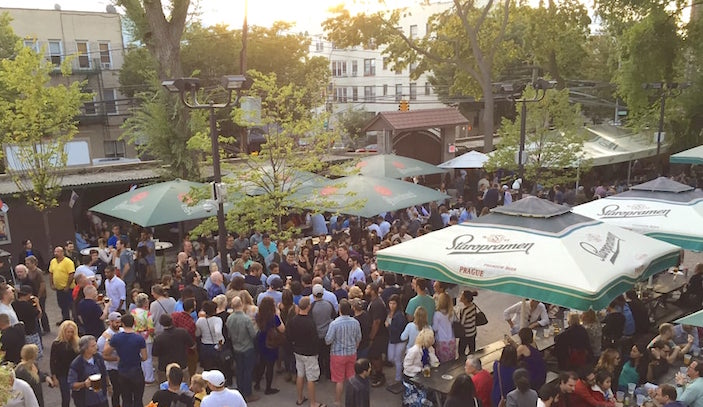 One of the city’s original beer gardens remains among the best. Bohemian Hall and Beer Garden is so big, it basically has its own zip code — when the weather warms up, the massive garden full of picnic tables and a giant screen is the best place to be for live sports. The beer selection is not as deep as some places, but pitchers are all less than $20 with options like Hofbrau, Six Point and Abita. Bonus: This is also the only beer hall in the city where your drinks benefit cultural education through the Bohemian Citizens’ Benevolent Society of Astoria. 2919 24th Ave., Queens, bohemianhall.com 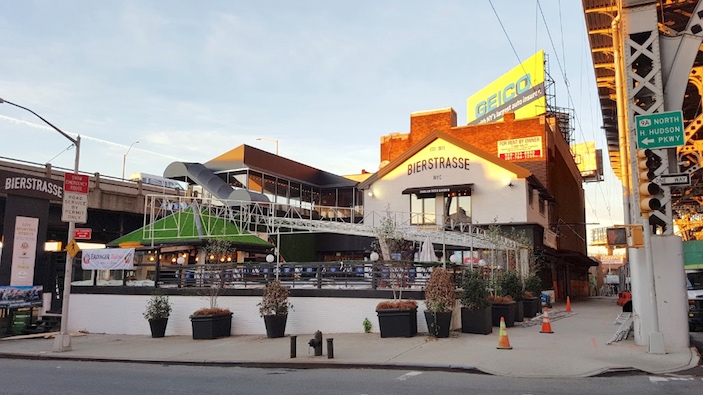 Hudson River views while you sip Eastern European pilsners is what you’ll find at Bierstrasse Harlem. This piece of Germany next to the 12th Avenue viaduct will serve you a pretzel the size of your head and a sausage platter, but also mixes in a few New York favorites like chicken & biscuits with gravy and beer-infused mac ‘n cheese. Cozy up inside the rustic dining room or bring a friend on a sunny day to enjoy the outdoor tables surrounded by greenery. 7303, 697 W. 133rd St., bierstrassenyc.com 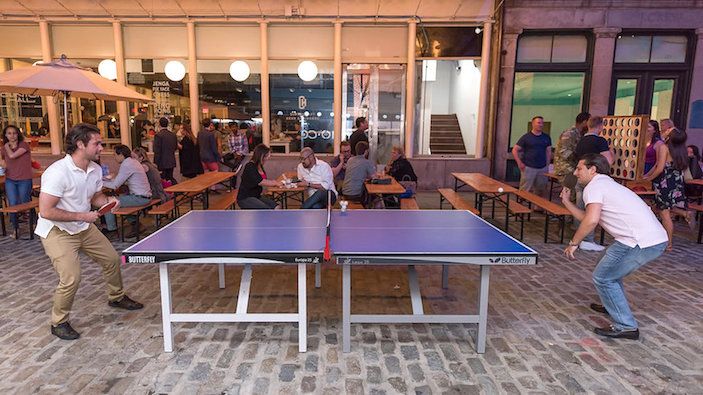 Clinton Hall at the Seaport District

South Street Seaport is the city’s oldest berth, still paved with cobblestones with the architecture of a seaside town, and a growing number of entertainment options are giving it new life as one of New York City’s most exciting destinations. At the heart of it is Clinton Hall, a two-story beer hall with 20 rotating taps of whatever they’re excited about at the time, with a few surprises like cask-conditioned ales thrown in, and a menu of 20 burgers  , tons of bar games, plus a menu made up almost entirely of burgers, with the viral WTF Waffles for dessert. 19 Fulton St., Seaport District, clintonhallny.com 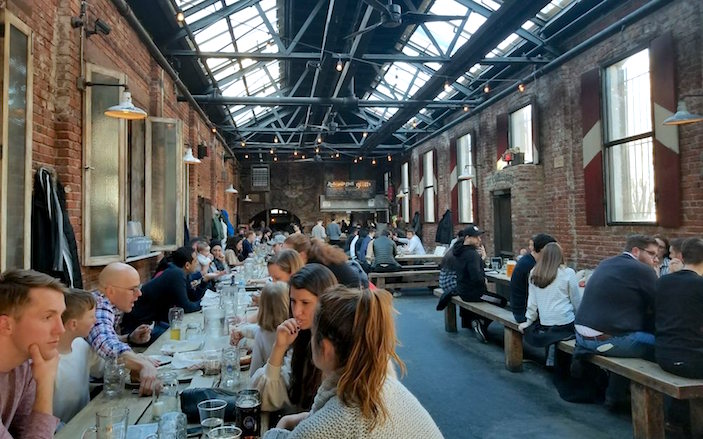 Williamsburg’s Radegast Hall & Biergarten has all the hallmarks of an authentic biergarten, with all the right mostly German but also Czech, Italian and British beers flowing, and even a few non-alcoholic options for all partiers. But what makes it a family-friendly favorite of the neighborhood is its large, sunny dining room, where you’ll find live music nearly event night, and the giant outdoor grill turning out delicious brats and sausages for the climate-controlled back patio. 113 N. Third St., Brooklyn, radegasthall.com