The Chris Gethard Show will be returning to truTV on March 20th for another season of unscripted late night TV chaos.

For those unfamiliar with it, host Chris Gethard started The Chris Gethard Show back in 2009 as a monthly show at New York City’s Upright Citizens Brigade theater. He brought the show to public access in 2011 as a weekly call-in show — it ran there until 2015, on the Manhattan Neighborhood Network. After that, the show was picked up by Fusion, where it had a brief run of episodes. Third time’s a charm and Gethard landed on truTV in 2017.

The show takes a punk-rock sledgehammer to the late night format, as it’s one of the only pieces of broadcast TV — outside of sports — that is completely live and in the moment. This off-the-cuff approach makes for some wild television viewing, as the show has the potential to go off the rails at any moment.

The Chris Gethard Show aims for the unpredictable 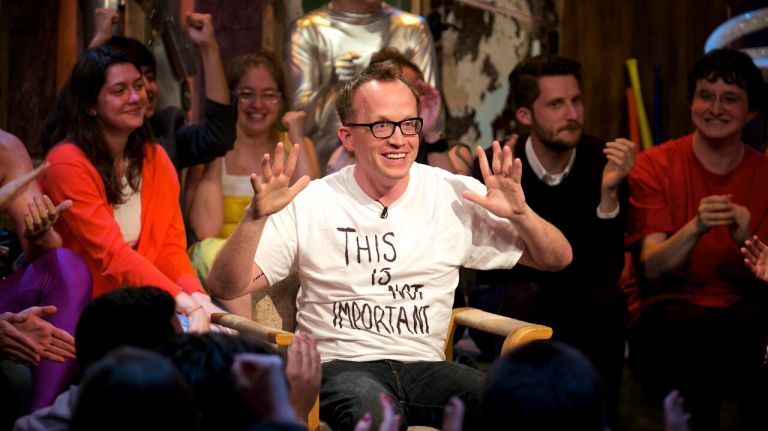 “It can be a real whirlwind,” Gethard tells Metro. “We do have this weird methodology where we work really hard and build the outlines of what we want to happen, but we know that if it goes as well as we want it to … it falls apart. You always have to be alert and it’s definitely its own animal. I’m really grateful that these are my problems in life. There’s very little artifice with the show — what you see happening on screen is actually happening. The mistakes that are happening aren’t staged and the emotions aren’t preplanned. It’s a living experiment on a national platform. It’s probably a bad idea that they let us do this!”

An experiment is a great way to explain what this show is down its essence. Gethard is joined by a cast of characters including his co-host Shannon O’Neil, announcer Murf Meyer, house band the LLC lead by his wife Hallie Bulleit, and a cast of revolving characters that drop in on the show to derail things.

Recent episodes have included celebrity guests who sit in through Gethard’s unscreened calls from viewers at home and live performances by bands, making the studio resemble more of a DIY show space than an actual television set.

So with all of this insanity,  what was it like taking the Chris Gethard Show from public access to its new home on truTV? According to Gethard, the hard work didn’t go away once the show received more attention. “I loved it and felt very lucky to do it. But it almost nearly killed me,” said Gethard, regarding the first season on truTV. “There was a stretch where we did 10 episodes in a row with no break. You always hear about TV people complaining about the pace of it all, and I’m always like ‘you baby … you have the best life.’ But then, after seven or eight episodes in, I was like, ‘ohhhh, I’m one of the babies now. This is hard!’ I absolutely limped to the finish line. That being said,  I loved doing it and cannot wait to get back into the ring. We did a lot of stuff that I’m really proud of, and I have a lot of ideas on how to make it better.”

The Chris Gethard Show is truly a beacon of light for people looking for something weird that blows up the entire idea of what late-night TV can be. For Gethard, this is the show that he wishes he could have watched when he was a teen.

“When me and my brother were growing up in North Jersey in the ‘80s and it wasn’t so easy to be nerds,” Gethard explains,  “there wasn’t this Comic-Con culture. We were getting our asses handed to us at school, and the one place we often had was our basement, with our TV. We would flip through those UHF channels and find something weird. I always have it in my head that when I was 13 and my brother was 15, and all we had was that basement where we could find weird stuff in the middle of the night — what would I put on for those two kids back then? It’s really meant so much to me that a lot of people that are that age have watched it. We’ve been around enough years now where I’ll meet people who are college graduates who watched the show when they were freshmen in high school, and it got them through their awkward years. That’s what I’m here for. Deep down that’s what the chip on the shoulder is all about with this show.”

The Chris Gethard Show will return to truTV on Tuesday, March 20th at 11 pm ET with guest Abbi Jacobson and music from Charly Bliss.