The dangerous security risks of Airbnb rentals - Metro US
Travel Airbnb has over 40,000 listings in New York City, thousands of which are estimated to be illegal by state housing laws.

For years, Airbnb has operated under a veil of secrecy by refusing to provide hosts’ listing addresses to law enforcement officials who are tasked with keeping our neighborhoods safe. But a new poll released this week shows that 63 percent of New York City residents support requiring Airbnb to provide law enforcement officials with addresses for their listings, just as they do in other cities like San Francisco, Chicago and New Orleans.

Regardless of age, gender, race or geographic location, New Yorkers spoke with one voice, telling Airbnb it’s time to come clean and provide their addresses once and for all.

The overwhelming support for this proposal shows New Yorkers forming a united front around a single issue. As residents of the largest city in the U.S., they expect Airbnb to be held to the same standards here as it is elsewhere. New York should be setting the national standard when it comes to protecting the safety of residents and families, not trailing behind.

Despite their claims, Airbnb’s public safety protocols are dangerously lax and a far cry from the standards regularly followed by legal lodging establishments. Airbnb doesn’t conduct comprehensive background checks on all hosts and guests, nor does it even require photo identification upon arrival and check-in. On the contrary, traditional hotels consistently register information about their operations and the identity of their guests.

These shortfalls were recently on display when a woman filed a lawsuit against Airbnb after allegedly being sexually assaulted by an Airbnb “Superhost” in Los Angeles. As it turned out, the accused had a record of battery and domestic violence.

Airbnb likes to call itself a “trusted community marketplace,” but how well can we trust a company that goes out of its way to shield hosts who break the law, threatening the safety of our neighborhoods?

Since Airbnb won’t step up when it comes to the safety of our communities, lawmakers must now look out for the public interest by requiring Airbnb to provide addresses of its hosts’ listings to law enforcement officials. 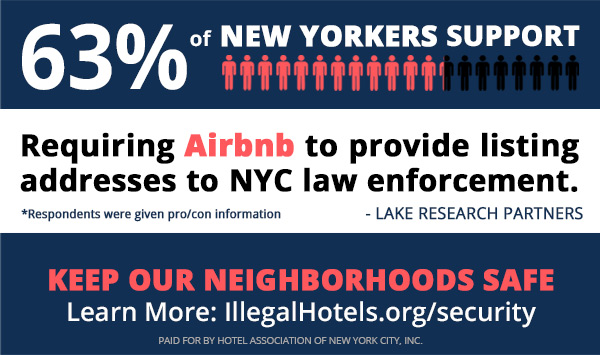