“Deadwood” contains all things. It is a western set in the camp of Deadwood, South Dakota, while it still operates in the murky gray area outside of U.S. jurisdiction in the 1870s. It is a political drama charting the rise from camp to town. It’s a meditation on the nature of violence, abuse and addiction. It’s a Shakespearean meditation on the human condition and how we choose to handle our suffering, where characters go on long soliloquies while mopping blood from floors. It’s also a farce, as well as a satire. It’s also a love story. It’s a love letter to America and its roots as a frontier state. It’s a critique of the consequences of entrepreneurial capitalism. It’s also entirely physical, where there are long exchanges of characters simply watching each other go about their days or striding through the thoroughfare, about to act on a violent impulse. It’s a costume drama with an ensemble cast containing the most complicated and esoteric dialogue that also is the bawdiest, curse-filled show in the history of television. 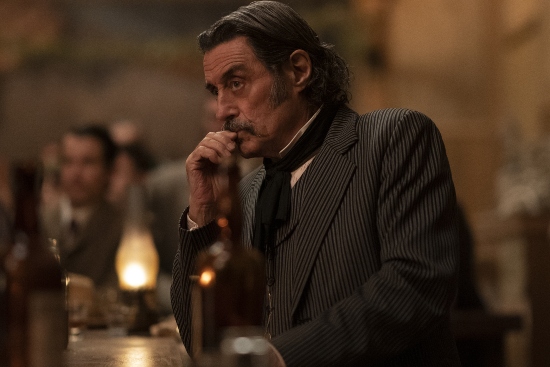 The themes and problems the characters have are universal. There is a powerful billionaire who comes to town and thinks the rules don’t apply to him. “That goes on now in every town in America,” the star, Ian McShane, who plays the unforgettable Gem Saloon proprietor Al Swearengen, said after the premiere last week. “It’s about time.”

And like all great stories, it is incredibly difficult to explain to someone without making a conversation into a lecture. And unfortunately, since “Deadwood” was produced between 2004 to 2006, it also carried the relic of a Bush-era consideration — the threat of cancellation. “Deadwood” had a strident, however limited, following during its run. This was still HBO in the mid-2000s. Prestige television was still a burgeoning concept and the end of “The Sopranos” was in sight — HBO needed to ensure it had a flagship program. “Deadwood,” for all its strengths, was likely not it. The golden era of television was just beginning, its benefit of creative liberties not to be reaped by “Deadwood.” That path had yet to be paved, and considerations such as audience size and trifling things such as money were far ahead of what is now a more commanding factor: prestige.

Here we are in 2019, and the era of nostalgia is at its nadir. The long-rumored, once-promised concept of a movie to tie up the considerable loose ends has come to fruition. But now, the landscape of prestige television is becoming rapidly similar to what contributed to the necrosis of mainstream film. There is an overreliance of intellectual property stemming from franchises, reboots and adaptations with an overwhelming hope that they’ll become “hits.” A show with the subtleties and considerations of “Deadwood,” with its drawn-out, long-form narration and focus on dialogue, couldn’t possibly be created in 2019 — it can only be rebooted for a two-hour movie.

The movie is, like every episode of “Deadwood,” completely fantastic. Loose ends from the original series are recalled and addressed. Redemption is either sought or articulated. Certain characters fall and other characters rise; each one continues to evolve. There is even a moment of titillating Marvel-style fan service. The show knows and loves its characters and the plot is intertwined with their emotions and arcs. The last scene and last line are nothing if not one of the most memorable moments in television history. However, the field is now exceptionally crowded. There are more shows on television than a human being could ever have time to watch, and more than plenty that require the type of considerate thoughtful viewing that “Deadwood” commands. Much like “The Sopranos,” Deadwood isn’t fit for binge-viewing.

So, the golden age of television is over. Program franchises like “Game of Thrones,” which don’t command the same type of viewership levels as network television programs 20 years ago, dominate the cultural zeitgeist. They are neither intellectually stimulating nor pure popcorn. The narrative choices and methods are neither safe nor challenging or experimental. If anything, the biggest “shows” are now brands, “media franchises” careful to be maintained and stay profitable. You can buy a Walter White action figure and “Game of Thrones” Monopoly.

The idea of a “Deadwood” reboot was the ultimate pipe dream that most assumed would never happen. Where can we go from here? We’ve come full circle. The “Deadwood” of yore returned for a gratifying final chapter, and the book is closed. The era of “safe television” continues on.

Watch the trailer for the Deadwood movie below.