The Grumble: Why-oh-why do people have to play music on the subway? - Metro US
Grumble

The Grumble: Why-oh-why do people have to play music on the subway? There is always the feeling of dread when you find yourself on a subway car heading to work in the morning and the doors open with a fresh batch of people cramming in as the train moves towards it’s next stop. Who will be among this new cross-section of commuters? What will they bring to the perverbial table? Perhaps one of the worst cards you can be dealt in this situation is that person who comes onto the train with a boombox blasting tunes that no one else wants to hear. Or even worse, when they add insult to injury and simply play music through their lousy phone speakers without headphones. Subway music. Just typing out these scenarios takes me back to those moments of deep malaise and contempt. Whoy-o-why can’t you just use headphones?

We asked this question in our print edition of the Grumble and received some great submissions from you, the faithful readers, about people playing music on the subway. 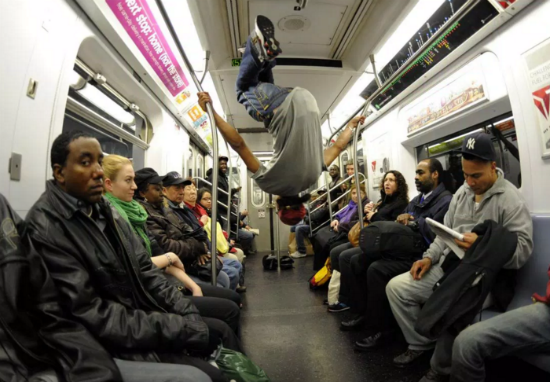 One of our first submissions about this horrible subject was from one of our frequent Grumblers, Tyronne Lee, who broke down this whole scenario…

I have had it with people who dont use earphones and torture us with listening to that horrible music. They want their appearance to be cool or tough. Now it has gotten to the point where people bring boom boxes and blast them on public transportation without any respect for those of us who want a quiet ride. How hard is is to go to the dollar store and get some ear phones?!!!!

By Tyrone Lee, Metro US reader

I don't want to hear YOUR music!

It really grinds my gears when someone decides to turn on Pandora, YouTube, etc. on any type of public transportation and they don't have any headphones. Yes I am a fan of all types of music, but when it's 6am and I am barely awake or its after 5pm and I had a long day at the office the last thing I wanna hear is the latest rap song that has no damn meaning. Yes I understand that it's PUBLIC transportation but have a little consideration for others. If your gonna play it out loud then the least you can is turn it down a notch or three!!!

By Latasha Campbell, Metro US reader

In Philly, they have tried to combat the issue of subway music by having "Quiet Cars" on their SEPTA trains. But even still, there are those who still just can't get the memo...

Quiet cars on the Philly SEPTA

A few years ago the Southeastern Pennsylvania Transportation Authority (SEPTA) initiated the Quiet Ride Car on its regional rail system, a real jewel of a perk since this policy is likely untenable on any other mode of public transportation in its system. Basically, regional rail riders get the privilege of riding to and fro on the train in peace in the first car of the train so long as there are three or more open cars for riders. There are signs posted in every car as to what those rules are: no cell phone use, turn your ringers off, no talking. Basic rules, right?

However, it never ceases to amaze me that the rules of Quiet Car etiquette are invariably broken every day, as if the rule breakers are absolutely compelled to break the rules in this car while patently disrespecting other abiding riders on the car.

Here’s what it boils down to: 1) if you’re wearing headphones and riders can still sing along with or otherwise identify with what’s playing out of those headphones, you’re violating the code of etiquette; 2) if you’re bringing your young child into the Quiet Ride Car and this child is too young to “play the Quiet game”, you’re violating the code; 3) if you’re talking on your cell phone (or it’s on speaker and we can hear chapter and verse of you and the other person having this conversation), you’re violating the code (hint: abiding riders don’t want to hear dinner plans being made, nannies being interviewed, business negotiations being crafted, medical appointments being made/cancelled or any other who-struck-John dribble in between); and 4) just because your stop is coming up and you’re about to get off the train doesn’t mean that you’re free to talk in the Quiet Ride Car because the rule is about to be inapplicable to you. It remains in force because there are others left in the Quiet Ride Car who deserve the respect of peace and quiet that they expected when they first boarded.

If you want to talk and air your life’s details among the cacophony of babbling with perfect strangers, do it in any other car but the first car on SEPTA’s Regional Rail (another issue entirely when it comes to behavior generally on public transportation), but please respect those of us who just want peace and quiet in the Quiet Ride Car.

Oh, if people could just follow the rules. What a wondeful world that would be ...

Do you have any of your own experiences with horrible subway music? Send us your Grumbles to grumble@metro.us.