Hulu has offered an exclusive image from Handmaid’s Tale season two — and it tells us a lot about Ofglen (Alexis Bledel) and where she’s been.

The second season, which premieres on April 25, will expand the Handmaid’s universe and give us our first look at “the Colonies” (the area beyond Gilead where women are sent as punishment to clean up radioactive waste). In fact, that’s exactly where Ofglen — formerly known as Emily — has been all this time. Remember when she tried to run down a bunch of soldiers in season one? 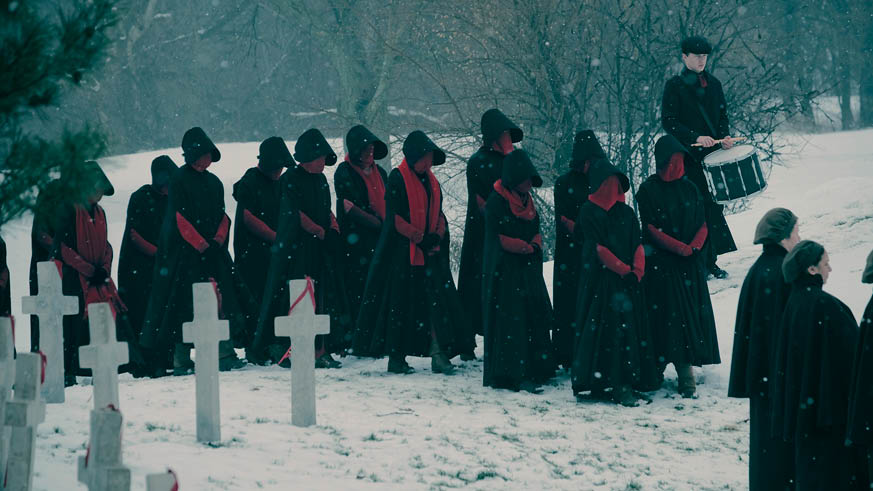 We also get to see some more of Emily’s life before Gilead. “I loved filming Emily’s flashbacks,” Alexis Bledel told Entertainment Weekly. “[Executive producer] Bruce Miller and I had talked about what her pre-Gilead life might have been like even before I started working on the first season.”

She continued, “I think much of her worldview is informed by her previous life as a professor of cellular biology. Life in the Colonies is a last stop. Emily does not have a great deal of hope for a future there; she knows her days are numbered.” In the Colonies, you lose your of-man name and become an un-person as well. Sounds bleak AF!

Bledel also talked about whether or not the Colonies were worse than living life as a Handmaid:

Being forced to exist in either Gilead or the Colonies threatens to destroy a person’s soul in different ways. Handmaids are forced to follow an extremely limiting set of rules to comply with the mandates of the Gileadean regime, including the horrific monthly ceremony. Anyone in Gilead would be terrified to be sent to the Colonies. Everything from the soil the “unwomen” turn over to the water they use to wash is toxic in the Colonies, so a person’s health begins to rapidly deteriorate as soon as they get there. They know they will die there, all the while forced to do hard labor without decent food to eat or clean living conditions.

The Hollywood Reporter previously reported that Clea Duvall would be joining Handmaid’s Tale season 2 as Emily’s wife and co-parent.

The second season will see Gilead take control of America, and focus on June/Offred’s pregnancy and her struggle to find her first daughter.