The Kentucky Derby Is Not Just a Race: 10 Reasons to Go! - Metro US
Travel

The Kentucky Derby Is Not Just a Race: 10 Reasons to Go!

For two weeks at the end of April (or in the case of 2018, into the first week of May), all of Louisville, Kentucky suddenly bursts into bright colors, oversized hats, life-sized painted horse statues and horse racing-themed cocktail parties. Even local schools are closed to celebrate the horse race, known as “the most exciting two minutes in sports.” Here are 10 reasons to add the Derby Festival to your bucket list. 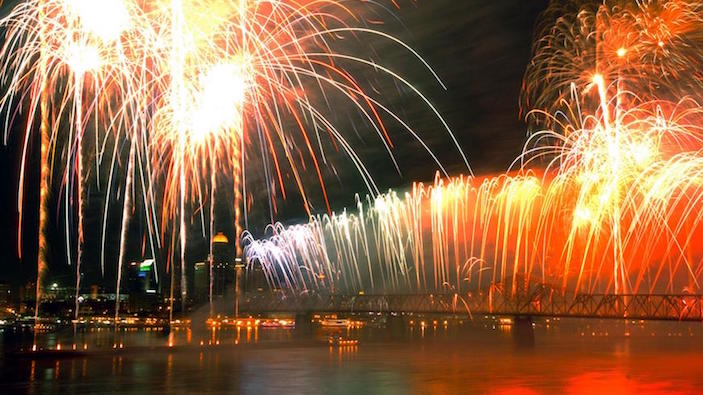 The annual Derby Festival kicks off with a bang, literally at Thunder Over Louisville, the largest annual fireworks display in North America and the official start to the Derby Festival. Although the fireworks don’t start until 9 pm, most locals head to the Ohio River waterfront in the morning to enjoy a full day of festivities leading up to the show. Highlights include a spine-tingling airshow throughout the day and every type of fried food imaginable. The best way to watch the fireworks is at a private party or on a roof somewhere, such as at the Thunder VIP Rooftop Party.

Insider Tip: The cheapest way to watch the fireworks is with a tent, a blanket, and some folding chairs right on the waterfront, along with thousands of other locals! Arrive early to claim your spot and bring plenty of sunscreen.

The food in Louisville is amazing year-round, but during Derby Season, it’s especially good. For a fancy and traditional meal, head to the historic Jack Fry’s or beautiful Buck’s in Louisville’s prettiest neighborhood, Old Louisville. Looking for something a little less fancy and a little more fried? The Chow Wagon serves up fairground fare on the waterfront during the Derby Festival. Can’t decide what you want? Sample it all at Taste of Derby.

You can’t leave town without trying Derby Pie. Though its inventors are famously obsessed with guarding their legally protected creation (they’re usually only sold frozen in grocery stores), you can find imitations all over Louisville during Derby season. Just ask for something like Chocolate Pecan Pie and wink a lot. You can try an excellent Horse Racing Themed Pecan Pie with Chocolate at Homemade Ice Cream & Pie Kitchen or Sweet Surrender. 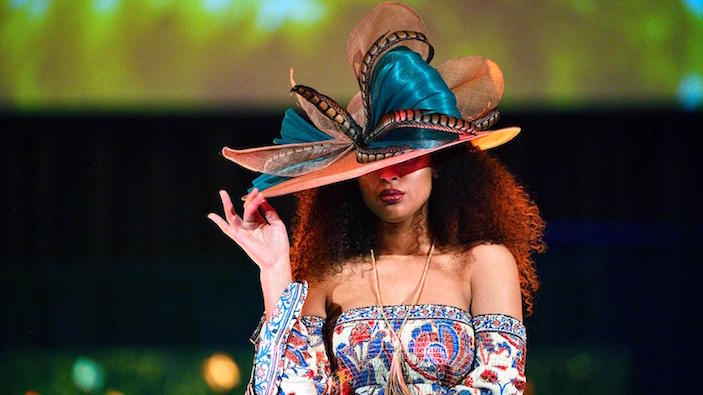 Seersucker suits, cocktail dresses, and ridiculously large, overly decorated hats: Derby Fashion is half the fun of Derby Season! Get inspired by the Macy’s Spring Fashion Show, and then don your Sunday best and accessorize with one of the gaudiest, enormous, and beautiful hats you can find. You can pick up Derby-appropriate headwear at Revelry Gallery, a boutique featuring creations made by local Louisville artists. The Kentucky Derby Museum also sells a colorful array of Derby hats, which is a great excuse to visit the tracks and learn about the history of Churchill Downs. Or, why not head straight to Formé Millenary to commission a custom design, because when else can you work with a professional milliner?

No Kentucky Derby is complete without a down-home Derby Party. If you’re short on local friends, the next best thing is the Hillbilly Outfield, a two-day shindig complete with lawn games, camping, and live music. You can also head to the waterfront during the week of Derby for Fest-A-Ville. The festival on the banks of the Ohio River includes live music, fried food, and a series of exciting events including Neigh-Maste, the Ken-Ducky Derby, and the Derby Pun-Writing Championship. Bonus points if you can guess which one of those events is made up.

Bourbon — the sweet, amber-colored, vanilla-scented whiskey — is as quintessentially Kentucky as the Derby. Try a taste at one of the many stops on the Urban Bourbon Trail, an adorably named collection of bars in Louisville which offer over 50 varieties of bourbon. Order the official drink of the Kentucky Derby, the mint julep; or try an Old Fashioned, the official cocktail of Louisville. 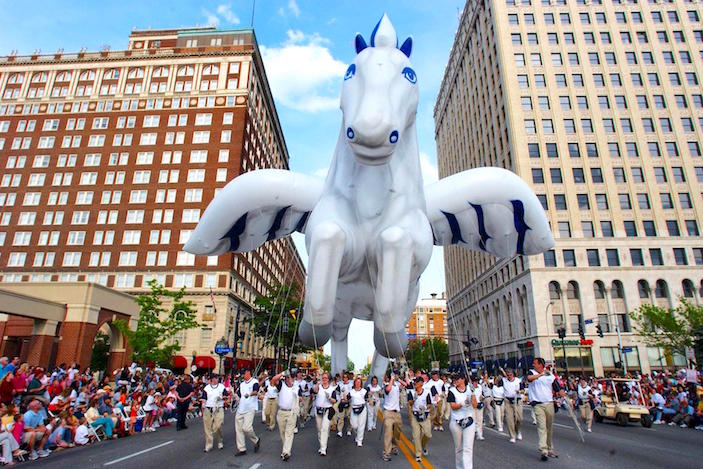 The Pegasus Parade has marched through downtown Louisville since 1956, making it the Derby Festival’s first and oldest event. You can catch the action from the dogwood-lined streets of Broadway. Keep an eye out for the Grand Marshal of the parade, a position served by celebrities and local heroes over the years. Yes, that includes Louisville’s own Muhammad Ali and Colonel Harland Sanders, who is buried in Louisville. If you came to this article looking for a reference to Kentucky Fried Chicken, that was it. There’s only one.

During Derby Week, celebrities from the A-list to the H-List flock to Derby City to party in style (or, in Jennifer Lawrence’s case, to visit her hometown). You can rub elbows with celebrities at Unbridled Eve, but your best chance to see a celebrity is at The Barnstable Brown Gala, the most star-studded A-list celebrity event of the season. Hosted by the Doublemint Twins (yes, really), a ticket costs over $1,000. Not quite on a celebrity budget? Just pick a party and head to the venue to watch the red carpet festivities from outside!

Insider Tip: Many celebrities will be staying at 21C Museum Hotel or The Brown Hotel, two of the most famous accommodations in Louisville. Stop by either for brunch and you might just catch a few hungover celebrities hiding behind oversized sunglasses.

Just outside of Louisville is the Kentucky countryside, dotted with grazing horses and intersected with winding roads. Late spring turns the rolling Kentucky hills a lush, buzzing green, and there’s no better time to take a day trip to tour a bourbon distillery. Woodford Reserve is the official bourbon of the Kentucky Derby, and the official distillery of my heart (although Maker’s Mark distillery is a close second). No time for a day trip? Head to Angel’s Envy, a bourbon distillery located in the heart of downtown Louisville. 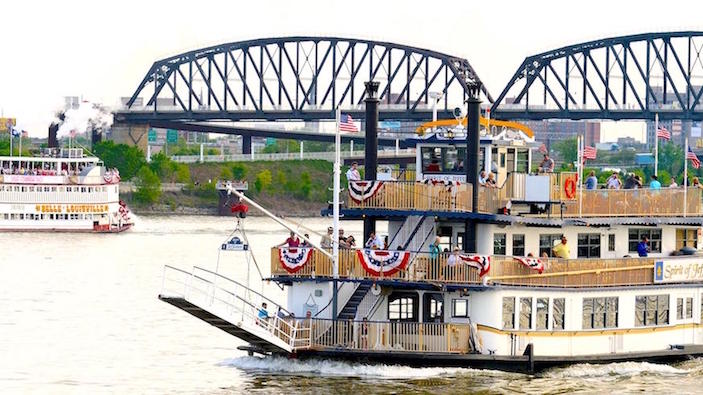 The Ohio River, and the steamboats that traversed her muddy banks, are as much a part of Louisville’s colorful history as the Derby. Relive that history on The Belle of Louisville, who has graced Louisville with her bright red paddle wheel since 1914. Today, the Belle of Louisville typically hosts guests for dinners, evening cruises, and events. But during the Derby Festival, she gears up for The Great Steamboat Race. For over 50 years, two historic steamboats have raced down the Ohio River in the most exciting 20-or-so minutes in boat-racing. Board the Belle or her opponent, the Belle of Cincinnati, to experience the action front and center. Or, you can watch the race from the waterfront.

The most exciting two minutes of sports may be the main attraction of the season at Churchill Downs, but it’s certainly not the only race. If you want to soak up the excitement of the races without the price tag (or the crowds), you can visit Churchill Downs all week long on a General Admission ticket. The stakes are a lot lower, but the drinks are just as good — and there will still be plenty of fabulous giant hats. Most locals go to Thurby or the Kentucky Oaks rather than the actual Derby, anyway.

During the week leading up to the Derby, head to Churchill Downs early to catch the morning workouts during Dawn at the Downs. Afterwards, pop across the street to Wagner’s Pharmacy for a bite to eat. Since 1922, this historic diner has been serving down-home meals and selling jockey silks — plus, rumor has it that you might just see the occasional celebrity here.