The Louis CK comeback is starting. Does he deserve it? - Metro US
The Big Stories

The Louis CK comeback is starting. Does he deserve it? The comedian re-emerged at the Comedy Cellar in New York, a club known for surprise sets by famous comics, on Sunday, Aug. 27. According to the Times, his unannounced appearance was greeted with an ovation; he went on to perform a 15-minute set of “typical Louis C.K. stuff.” He did not mention the allegations against him or reference the #MeToo movement.

As a return to the comedy scene, the Louis CK comeback show had its own problems:

The audience last night didn’t choose to see him. It was a nonconsensual surprise, his specialty.

But the big issue is whether Louis C.K. deserves a comeback. Stepping in to serve as self-appointed judge, jury and pardoner is fellow comic Michael Ian Black, whose standard for a man who doesn’t deserve redemption is Bill Cosby: [Editor’s note: By the end of the day, Black acknowledged that his position is “not defensible.”]

Will take heat for this, but people have to be allowed to serve their time and move on with their lives. I don’t know if it’s been long enough, or his career will recover, or if people will have him back, but I’m happy to see him try. https://t.co/QmqdGJnIjy

Thankfully, another entertainment icon brought enough tea for everyone. Twitter user @thecherness (no, not that Cher) explained that no, not performing in public for nine months does not count as time served:

Michael, he issued an apology then went silent for 9 months. That’s not redemption. It’s PR. We already have existed in a system that has always historically prioritized the needs and actions of men before everything else. I get the crux of what you’re saying, but …

Until we start prioritizing the victims, start truly penalizing sexual harassment & assault, and ppl who commit either actually face justice, no way should we be discussing the path to redemption.

Look in the news at the # of rapists that get off w/little more than a slap on the wrist.Or the # of victims that STILL don’t come fwd bc of the way they’ll be treated for doing so. Or the # of rape kits that go UNPROCESSED. when ALLLLLL that changes we can discuss redemption.

I don’t think you’re defending sexual assault. I DO think your position of privilege is leaving you a little shortsighted in this instance. 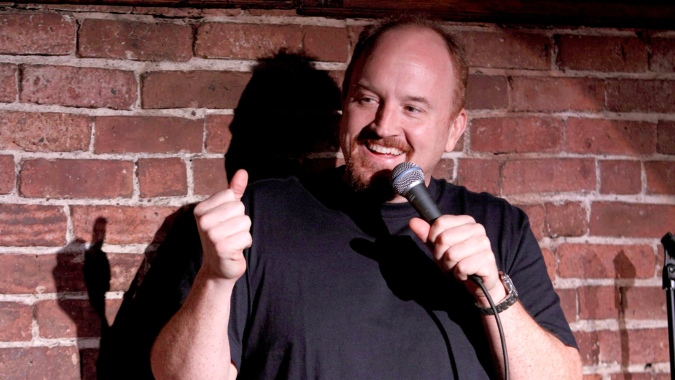 Louis CK will not be getting a Father’s Day card for the next forever, anyway. Getty Images

The problems with a Louis CK comeback

To be clear: Louis CK admitted the allegations against him are true, even if he’s not being taken to court over them. They’ve cost him a production deal with FX on four TV shows, a Netflix comedy special, and Orchard Films canceled the release of a movie written, directed and co-starring Louis CK called I Love You, Daddy (in which a 17-year-old girl and a 68-year-old man start a relationship).

His actions are particularly upsetting given how aware he seemed of the danger men pose to women in his seemingly feminist comedy.

But what should be the “punishment”? And how much is enough? Can he and other #MeToo men deserve to “find a way back in,” as Michael Ian Black puts it?

The better question is, have they earned a way back in? There are many ways to do this! Rehabititation for self-control or other issues, education on appropriate behavior in the workplace, learning to understand the harm he caused his victims, and especially reconciliation by working to promote female comics. You know, using the fame and money he built while his victims’ careers suffered or ended to fund scholarships or other support for up-and-comers.

Whether he’s done any of this is unclear, but he certainly hasn’t said anything about it in public, or addressed it in his impromptu Comedy Cellar set.

Why Louis CK should earn his redemption

So what should have happened instead of allowing the Louis CK comeback to begin on one of the biggest stages in the stand-up comedy scene? Do these accusations even matter considering his talent? Why don’t we just let the free market sort it out!

Take a moment to swallow your bile at those particularly upsetting ideas, then read on for a few ideas on how to actually move forward:

It’s not about “punishing” abusers for what they’ve done. It’s about making sure those they abused feel safe and welcomed. By letting abusers continue to work you push their victims out of the industry.

The fact that Louis, a comedian whose whole thing is plumbing the depths of his own psyche, apparently didn’t mention his most recent, famous news in his surprise set tells you all you need to know about his desire for “redemption,” right?