In The Masked Singer episode 4, aptly titled, “Another Mask Bites the Dust,” five familiar masked contestants returned to the stage to deliver some new musical performances for the judges and audience to puzzle over. This week, The Rabbit, The Alien, The Raven, The Poodle and The Bee all hit the stage one more time to see if they could continue to stump the panelists — Robin Thicke, Nicole Scherzinger, Jenny McCarthy, Ken Jeong and returning guest judge, Joel McHale. By the episode’s end, another celebrity was unmasked, joining the previously revealed performers, Terry Bradshaw’s The Deer, Tommy Chong’s Pineapple and NFL pro Antonio Brown’s The Hippo.

Needless to say, the hit Fox reality competition series continued to leave our celebrity detectives asking the burning question: Who is The Masked Singer? Here are all the highlights from The Masked Singer episode 4.

In his previous package, The Rabbit delivered a few clues that had the judges guessing it was *NSYNC’s Joey Fatone under the mask. Before taking the stage to perform “Wake Me Up,” by Avicii with Aloe Blacc, the mystery singer gave a few new clues for the judges to mull over. We saw images of the Coney Island fairgrounds and in one quick shot, The Rabbit is seen hiding behind a set of curtains. “Sometimes not being able to be yourself can leave you feeling boxed in,” The Rabbit tells the camera, before throwing a bunch of hot dogs in the air.

After his song was over, Robin suggested maybe he was a boxer who was also a good chef. But he then clarifies he wasn’t referring to George Foreman. Jenny agreed it may be a celebrity chef while Joel McHale said, “You are the greatest child actor celebrity chef boxer I’ve ever seen in my life.” Ken suggested it was a member of a boy band with names like Fatone and JC Chasez being thrown out while McCarthy guessed it was a member of Lady Antebellum or Rascal Flats.

The Alien strutted her stuff on The Masked Singer episode 4

This week found The Alien giving more hints about her past. We saw images of her in a child’s bedroom surrounded by stuffed animals, which included an out-of-place fake snake. Her narration told people who “think she’s out of fashion” that “she’s here to rise above all that.” And then, the clip ended with her levitating above the bed as she tells the audience she’s going to “push herself to the limit to show you all what I’m capable of.” She finally took the stage to sing The Cardigans’ hit “Lovefool.”

As the judges tried to figure out who she was, The Alien gave out a new clue, saying, “I’m a quadruple threat,” which led to a bunch of guesses suggesting she was either a singer or ex-model. After she was asked if she ever recorded an album, The Alien answered coyly, “I’ve recorded many things.” This prompted Thicke to suggest the person under the mask was Paris Hilton, while Scherzinger guessed it was either a member of The Jackson family, The Kardashians or Fifth Harmony. McCarthy honed in on the snake imagery to suggest it was Taylor Swift while Joel McHale said it could be Paula Abdul. 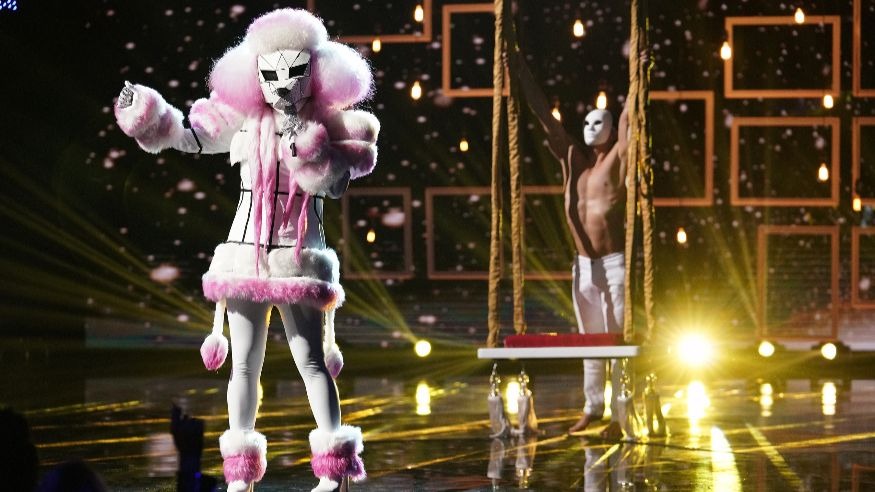 The Raven found her therapy on The Masked Singer episode 4

In her new clue segment, The Raven remarked that “this journey has taken me to places I never thought I had the courage to revisit.” She once again referred to herself as a bird, saying she was “the loneliest bird among all others.” That was until a man “saw her in a new light” and took her away from “her flock.” As she revealed these clues, a wall of TV sets appears in the clip with the year 1968 displayed on one of them. She said she cried tears of love into the Hudson River, before closing out the prepackaged segment saying that “her wings are unclipped” and her upcoming performance was “about just being me.”

After taking the stage to sing Lady Gaga’s “Bad Romance,” Ken called the routine the most sincere of the series, suggesting her performance was therapy. Jenny McCarthy honed in on the talk show host clue from the last time The Raven was on stage saying it could be Raven-Simone, while Joel guessed it was either Sally Jessy Raphael or Kelly Ripa.

In her intro segment, The Poodle dropped some new hints, telling the camera that “being on stage was so cathartic.” She admitted she loves being anonymous before saying she “has to be flawless to do the role of The Poodle justice.” She then referenced trying new material on her best friends, once again suggesting that she may be a comedian. Closing out the clip, she teased that her performance will soar to new heights “despite it being her biggest fear.” Starting off high above the audience, The Poodle sat on a swing and performed Cyndi Lauper’s “Time After Time.” After she finished her routine, she gave one more clue, saying she’s been fired multiple times. Jenny McCarthy suggested it could be Kathy Griffin under the mask while Joel McHale said it was former White House aide Omarosa Manigault Newman. Ken and Robin were puzzled, while Nicole Scherzinger suggested it could be fitness personality Jillian Michaels.

In her opening video, The Bee gave a few new clues saying, “I usually watch faces and they lift me up.” But now that she’s wearing this mask, she revealed she can’t see people. She referenced “singing the music of today” but not always being up on “what’s happening in the world today, musically.” She talked about having multiple awards and being “willing to flip the script” before she took the stage to perform “Locked Out of Heaven” by Bruno Mars. Both Robin and Jenny claimed to recognize the singer’s vibrato with Jenny pointing out the Georgia peach hint in the prepackaged segment. They both suggested it was soul legend Gladys Knight under the mask. Nicole guessed it was Dionne Warwick or Patti LaBelle while Ken said it could be Diana Ross.

The Poodle got unmasked, answering the question: Who was the Masked Singer?

In the end, The Poodle received the least votes and was unmasked in the episode’s final minutes. Before the reveal, the judges’ panel gave their final guesses which included Judge Judy, Jillian Michaels, Kathy Griffin, Sarah Silverman and Melissa Rivers. It turned out that all the guesses were wrong as comedian and actress Margaret Cho was revealed to be The Poodle! Needless to say, Ken Jeong was not happy he got it wrong as Cho was his co-star on the short-lived ABC series, Dr. Ken.

This leaves us with eight remaining mystery singers left in the competition as things are sure to heat up in the coming episodes. Who do you think The Masked Singer is?

The Masked Singer airs Wednesdays at 9 p.m. ET/PT on Fox.