The Rubin Museum’s mindfulness exhibit is an Instagram dream

There’s a lot of talk lately about living a more mindful life and starting “practices” like meditation and yoga. The Eastern cultures where these rituals come from have understood the power of the human mind and its deep connection to the body for centuries, and the Rubin Museum has cleverly fused the objects of Buddhist rituals with modern artworks in its new exhibit Power of Intention.

It makes sense that an exhibit all about being present both physically and mentally would have a lot of Instagram-friendly elements, but Power of Intention truly wows with exhibits that invite you to reflect and participate, curated by Elena Pakhoutova. 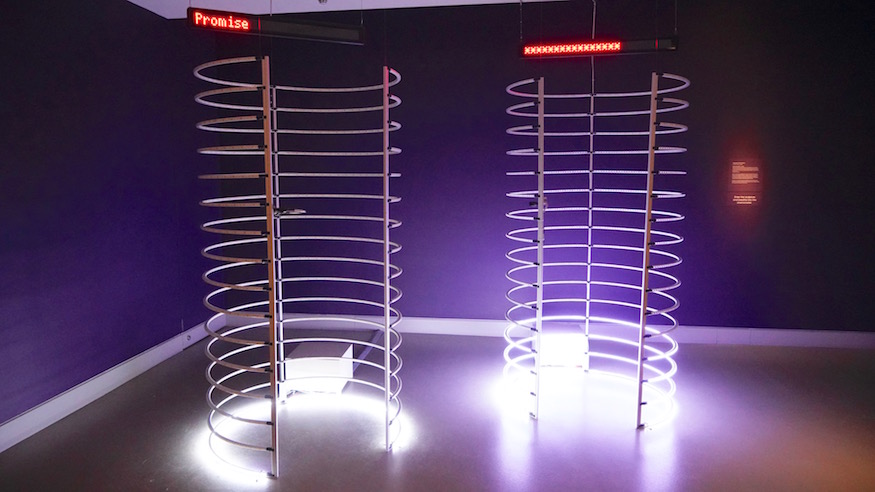 Guests are welcomed in the museum’s lobby by a wishing well where you can type an intention and electronically “send” the words up to the fifth-floor exhibit, projected with light as they float along the Rubin’s stunning spiral staircase.

The exhibit grew out of the Tibetan Buddhist prayer wheel, a cylinder that can be small enough to fit in your hand or as massive as a column, inscribed with hundreds or even thousands of mantras meant to be repeated as it’s spun. The entrance to Power of Intention is a dark room that feels much like stepping inside a prayer wheel, where intentions from downstairs (as well as online at rubinmuseum.org) scroll across curved screens.

French artist Gregory Lasserre combined a motion-sensing camera, projector and a fabric membrane into Metamorphy, turning each person who touches it into a wizard like Mickey in Fantasia calling forth bursts of color and a primal rumble like a gathering storm, making invisible the energy we put into the world. 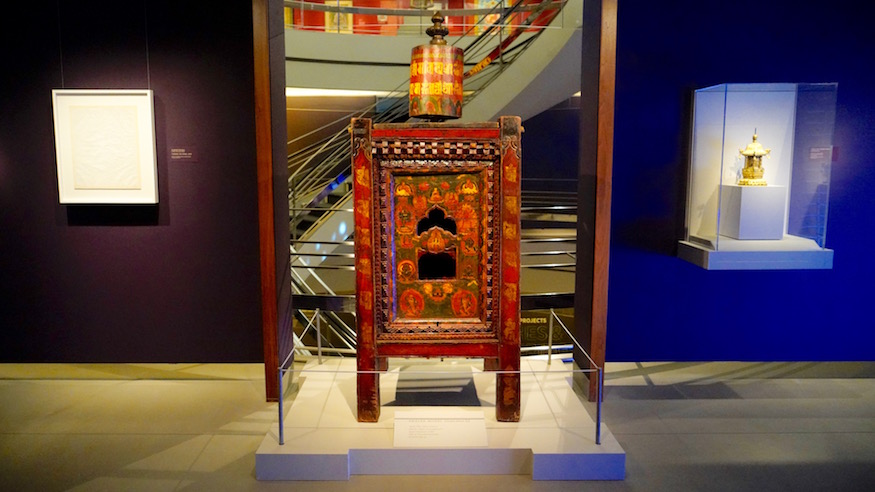 The two columns of light that make up Alexandra Dementieva’s Breathless gauge how often words related to intention — power, confidence, etc. — appear in English-language media and emit more or less light depending on what it finds. But you can change it too, by stepping inside the columns and blowing into a fan to make them fully illuminate. “The idea is that if people are present, physically, they can change things,” she says.

As a museum of Himalayan art, the exhibit focuses on the various objects used by Buddhists in mantras, or what the West calls prayer. There is an important distinction, however. Instead of making requests, Buddhist mantras are meant to channel an essential part of the deity being appealed to. Built on the same principle as “practice makes perfect,” mantras are repeated to channel the desired virtue and reaffirm a person’s commitment to embodying it.

Whether you’re seeking enlightenment or just want to embrace your own power to change yourself (or the world!), get inspired at Power of Intention.

Power of Intention is the first exhibit in the Rubin Museum’s 2019 theme, Power: Within and Between Us, which will be explored through shows, talks, screenings and experiences. It’s open now through Oct. 14. The Rubin is located at 150 W. 17th St. Admission is $19 for adults and free for kids up to age 12.