This is how much Americans binge drink in a year Drinking alcohol in moderation may have some health benefits, like lowering blood pressure and the risk of heart disease, although studies have shown that as little of one glass of wine a day can increase the risk of breast cancer in women. But we know that binge drinking is unequivocally detrimental to your health: It increases the risk of alcohol dependence, heart disease, cancer and liver damage. According to the Centers for Disease Control (CDC), “binge drinking is responsible for more than half of 88,000 alcohol-attributable deaths” every year.

Yet, Americans keep at it, and a new report from the CDC has the latest numbers on the damage.

The study, published in the American Journal of Preventive Medicine, finds that in 2015, Americans consumed 17 billion drinks — roughly 470 binge drinks per imbiber.

And those of us who are doing it, do it on the regular: According to the report, 1 in 6, or 37 million U.S. adults, binge drink about once a week, consuming about seven drinks per session.

OK, so you’re probably wondering how a “binge drink” is different from a regular alcoholic drink.

Binge drinking, as defined by the National Institute on Alcohol Abuse and Alcoholism (NIAAA), constitutes drinking four or more drinks in one sitting for women, or five or more drinks for men. This usually amounts to a blood alcohol level of .08 g/DL. (The NIAAA defines moderate drinking as up to one drink a day for women, up to two drinks a day for men.) 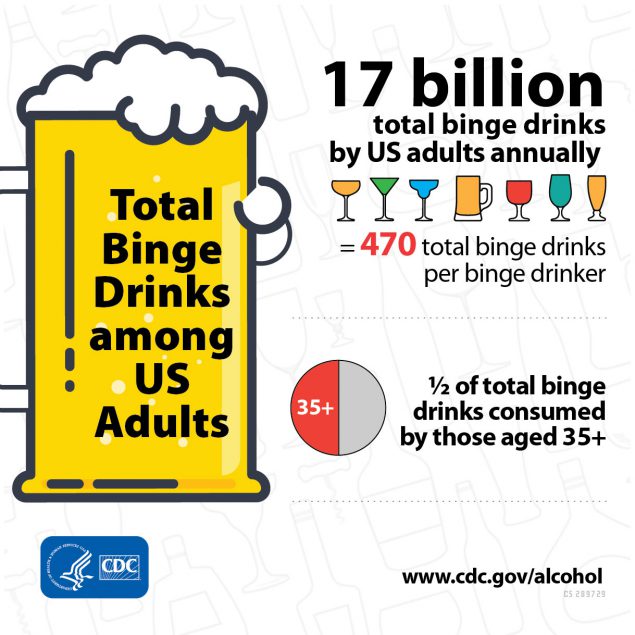 CDC researchers took these numbers from their 2015 Behavioral Risk Factor Surveillance System, which collected data from subjects on their (self-reported) binge drinking over a 30-day period.

The report also sheds light on who’s doing the binge drinking. Among the insights:

— 4 in 5 total binge drinks were consumed by men

— The lower the household income (less than $25k) and education level (less than high school), the more binge drinks consumed

— You can’t entirely blame millennials for this one: Although binge drinking was more common among adults ages 18-34, more than half of the binge drinks were consumed by adults age 35 and older

If binge drinking is a problem for you or someone you know, visit the NIAA for information on resources and treatment options.