Over 44 million people are shackled with $1.4 trillion worth of student debt, so it’s safe to say that we are looking at a full blown crisis in our country. With schools setting their tuition at unobtainable price tags, the average student is forced to take out either private or federal loans to front the bill. This debt sticks with them long after they earn their degrees and, in most cases, forces them into careers that may have not been their first choices simply to keep the collectors at bay. Consider it a “college industrial complex.”

Paid Off with Michael Torpey 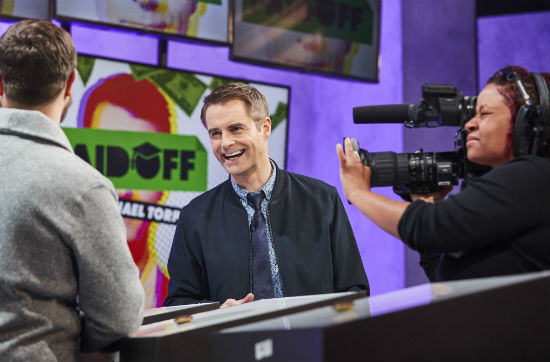 Like many of us, actor Michael Torpey thinks someone should do something about this, and he is taking up this mantle with his new game show “Paid Off with Michael Torpey” on truTV.The series — premiering on July 10th — follows similar parameters as tried and true standards like “Jeopardy” or “Who Wants to Be a Millionaire,” but instead gives contestants chances to win money or even eradicate their student debt in full by answering trivia questions.

According to Torpey, even though the show is helping the people who are lucky enough to compete the chance to alleviate their debt, the main goal is to draw attention to this huge problem plaguing the majority of people in our country.

“We’re giving away money to people who really need it,” explains Michael Torpey, “but I only shot 16 episodes. Even if i live to be a million years old, we can’t get to everybody. Putting a face on this issue is the more important part of this show.”

Eliminating student debt one show at a time

Unlike a lot of Americans, Torpey had lucked out when it came time for him to go to school. His parents were able to take out a second line of equity on their home in order to send him to study theater at Colgate University. But when he realized how much his wife had been struggling to pay off her loans after studying to be a psychotherapist, he truly started to understand the toll that this kind of debt can have on someone’s life.

After booking an acting gig on a large national campaign for Hanes underwear with Michael Jordan, Torpey was able to pay off his wife’s loans in full. To say it was a liberating moment would be an understatement. “When we wrote this check and I saw the tears in her eyes,” remembers Torpey, “ I realized the emotional aspect of debt and what it does to someone everyday. I really felt embarrassed that I didn’t understand what she was going through.”

By having this kind of debt, Torpey believes people are not allowed to take the kinds of risks they would be able to in order to follow their true passions.  “As long as we continue to have college be such an expensive thing — you’re going to be pushing people into a smaller window of professions,” he explains. “Who’s going to pay for law school and then go work for the Southern Poverty Law Center. No — they’re going to go become Panasonic’s corporate lawyer. We need people to do all of these jobs that society requires.”

The whole show is revolutionary in both feel and concept and — as someone who is still paying off his student loans — I couldn’t help but clench my fists rooting for these contestants. Michael Torpey is a natural as a game show host, making transitions with charm and ease. He also finds the right time to add sobering moments to make the viewers step away from the fun and realize what kind of a mess we are in, like in one episode where, after the commercial break, he addresses the viewers at home by saying, “If you are just tuning in — this is real life in America.” Torpey considers these instances his “Bob Barker” moments and, in an ideal world, we wouldn’t need a game show to take on this issue. We could just have Congress abolish the 90 percent of the student debt they control to let people actually live their lives.

“My show is a standing challenge to Congress,” says Michael Torpey. “Put me out of business! Get my show cancelled. I finish each show by saying, ‘Call your representatives and tell them that we need a better solution than this game show,’ and I absolutely mean it.”

"In an ideal world, this show would not be here," he adds. "I want Congress to watch this show and be embarrassed that it exists and feel that they have to do something.”