Sunscreen is a necessity during the summer — and we often choose sunscreens made with (or without) certain chemicals that are either shown to be dangerous, or just sound sketchy. However, there’s one ingredient in sunscreen — and other cosmetic products — that you probably don’t know about: squalene oil.

And even if you do known about squalene oil, you probably didn’t know that it comes from sharks.

What is squalene oil?

Squalene is found in a number of common foods and works as both a non-greasy emollient and a moisturizer on the skin. Shark livers are also a rich source of the oil and is cheaper to source, making it the preferred option for cosmetics manufacturers for decades.

It’s also found in our skin and livers.

The beauty industry is the biggest customer of the oil from sharks, with 80 percent used in various products, according to a 2012 report from the ocean conservation nonprofit BLOOM.

Is all squalene oil made from sharks?

Squalene can be founds in foods like olive oil, palm oil, wheat-germ oil, amaranth oil, and rice bran oil, but sourcing it can be upwards of 30 percent more expensive. More and more companies are opting to go with plant-based oil.

Andriana Matsangou, a spokesperson for Unilever, told National Geographic Australia that the company “sources squalene entirely from vegetable sources to avoid sourcing it from shark species.” The same goes for L’Oréal: The company says it stopped using squalene oil from sharks 10 years ago and has “implemented strict measures to control the origin of squalane from of our suppliers.”

However, there is concern that suppliers are misleading their customers on where the squalene they use comes from — and continued sourcing of the oil from sharks could eventually lead to disaster.

“The problem is we don’t really know what’s going on down there,” David Ebert, director of the Pacific Shark Research Center at Moss Landing Marine Laboratory, told National Geographic. “A lot of these fisheries operate in parts of the world that are kind of off the radar.”

Deep-sea sharks — like leafscale gulper sharks, basking sharks and tope sharks — are especially sought after because their livers are rich in squalene to help them stay buoyant in the depths of the ocean, but some of them are now at risk of extinction. The International Union for Conservation of Nature says 26 of the 60 species of sharks harvested for their squalene oil are vulnerable to extinction.

The difference between squalene oil and squalane oil

Squalane and squalene oil is technically the same thing. Squalane is the byproduct of squalene oil that’s gone through hydrogenation processing, making it more stable — and longer lasting — than squalene oil.

How to find sunscreen and cosmetics without shark squalene oil

“The demand for squalene is probably not as big as it was 50 years ago, but I don’t think anybody’s really monitoring what’s going on,” Ebert told National Geographic.

But it’s still used in products.

Your best bet is to look at labels for mentions of cruelty-free sources of squalene oil, like olives, or opt for cruelty-free versions of squalane oil. 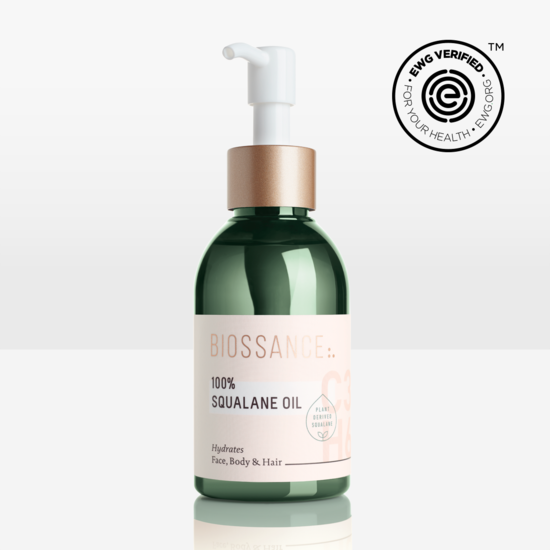 Biossance sells a 100 percent squalane oil derived from sugarcane, not sharks (get it at Sephora for $58).