Saying that the comedic universe that both Tim Heidecker and Gregg Turkington have created with their long-running Adult Swim series “On Cinema at the Cinema” is daunting would be a huge understatement. But as the show is now entering it’s 11th season of the two “film buffs” poorly dissecting the hit movies of the day and continuously creating thick clouds of awkward tension, there is one central strain of human behavior the two comedians are always interested in exploring: the know it all who really knows nothing after all.

With their new film, “Mister America”, Heidecker and Turkington — along with director and co-writer Eric Notarnicola — pick up with the character of “Tim Heidecker” after clearing his name of a murder charge he was facing after 20 teenagers died at a music festival he had put on after using vape samples he had passed out for free. The court case was, of course, aired as a non-stop C-SPAN style special on Adult Swim’s website.  Drunk on his power of winning this case after representing himself in court, Heidecker decides to run for the position of District Attorney of San Bernardino, CA and take the seat of the current DA who tried to put him away, Vincent Rosetti — whom Heidecker refers to as a “rat” in his campaign and in the press.

The power-hungry and self-righteous character that Heidecker has cultivated after all of these years of splintering off into new ventures from his tiny film review show has finally turned into the monster we all feared he might become. But in many ways, he has some of the same desires that both our politicians and public figures have today.

“The no-self awareness that a lot of politicians and a lot of public figures have and their audacity,” says Heidecker on the ripped from life inspirations behind his anti-hero version of himself.  “Also,” he adds, “we are interested in people with no talent who have this continuous drive to push forward despite their lack of ability. Also, we always love watching people fail and watching people lose. At the beginning of this film we thought let’s never raise the stakes to a place where you’d think there’s a chance that he could win… something we haven’t really seen is somebody so outside of the system running for something and the audience is way ahead of it.”

What sets this film apart from other spin-offs of the “On Cinema” universe, like Tim’s Jack Bauer-esque TV show “Dekkar”, is that the film is, supposedly, being made by a student filmmaker who is interested in Heidecker’s campaign and the scandal following him after narrowly escaping jail-time for all of those vape-based murders.

Of course, the young filmmaker had to reach out to one of Heidecker’s most credible character witnesses, his co-host of “On Cinema”, “Gregg Turkington”. Throughout the film Turkington, in typical fashion, would much rather spout out pointless film trivia facts, lavishing his camera time to further build up his brand as an aficionado. But as the film reaches its heated showdown between the two, you see that both are blinded in different ways by their pursuits to obtain different kinds of power. And failing miserably, of course. 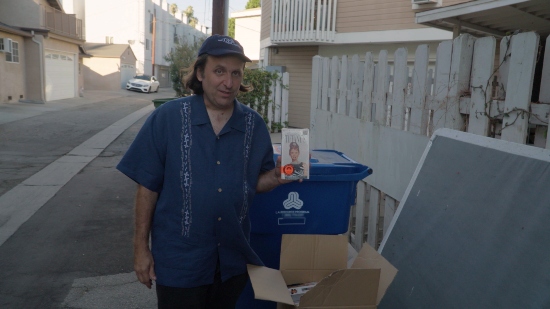 Gregg Turkington showing off one of his favorite VHS tapes in “Mister America”. Photo: Magnolia Pictures

“I think we both have our own agendas. We’re really two sides of the same coin. Tim is more of a go-getter who makes things happen. Both of us have things that we are trying to do and are going to use whatever it takes to make it happen. I think there are folks that have an unearned confidence. I’ve met people that have inspired my character where I’ll say, ‘I cannot believe how confident and sure of yourself you are when you’ve done literally nothing.’ I don’t know where that comes from! I’ve done a lot of things but I don’t have that kind of confidence. Most people I know in the arts or any field don’t have that kind of confidence. If I were to make a list of people who were most confident, a lot of them would be people who have done nothing. It’s this weird delusion and it’s unshakeable,” explains Turkington with a laugh.

“The two guys are such experts, or say that they are experts, and have intractable opinions on things, are very self-righteous,” adds Heidecker.  “But when it comes time to actually do things or make things, there is no display of understanding of how things of quality should be made.”

“Mister America” will be in select theaters this weekend. For showtimes and more information, head over to misteramericafilm.com.

Watch the trailer for “Mister America” below…