Tracy Edwards on her game-changing ‘Maiden’ voyage - Metro US
Entertainment The new documentary “Maiden,” by Alex Holmes, follows the incredible true story of Tracy Edwards who, at 27 years old, was the skipper of the first all-female crew to complete the Whitbread Round the World yachting race. Edwards bought the ship, which the film is named after, in 1987 after spending years in the male-dominated industry and decided to fight for equality by sailing in the race between 1989 and 1990.

The film, opening this Friday, was pulled together from footage shot by crew members Jo Gooding and Tanja Visser and shows both the struggles the crew experienced at sea as well as the negative reactions from naysayers on land. We spoke with Edwards to see what it was like to relive her extraordinary story through this new film. 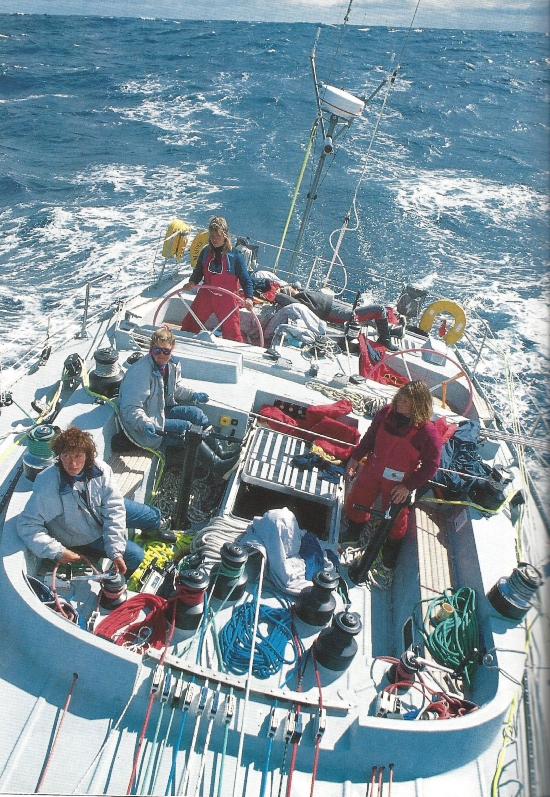 Before becoming the captain of your own ship, you had worked within the yachting business under numerous different positions — and for the most part, as the only female working onboard. What was the decision behind starting an all-female crew aboard the Maiden, and how was it met by the yachting community?

Tracy Edwards: Basically, I looked at the world as it was, and I thought I didn’t like the world as it was because I didn’t fit into it in the way that I wanted to. So I’m going to have to create my own world and to do that I’m going to have to approach it myself. Because I wanted to be a navigator. I wanted an all-female crew. I knew we could do this because I had just done it! I didn’t know what all the fuss was about. I thought, we’ll do it. We’ll prove we can do it, and we’ll start to change things where we’ll all get the jobs that we want on boats. I think as the project went on, I didn’t quite realize the backlash against us was going to happen and the specific nature of the comments that we would provoke. It didn’t have as much a big picture at all for all of us in that we realized we’re not doing this just for us and what we want to achieve. This is way bigger. This is not just about sailing. The bad stuff just made us more determined.

I feel like a lot of people may not understand how grueling and difficult sailing around the world really is. Do you think the film did a good job of showing the obstacles you had to overcome?

Tracy Edwards: I think what Alex has done so beautifully is the flow of the story. In a way, I didn’t realize until I watched the film how we were developing throughout the film. It’s impossible to capture completely what it’s like down there unless you have a perfect sensory experience with the cold, the wet, the pain, and everything else. I think what he has done is he has taken amazing pieces of Jo’s footage and really sewn them together. He wasn’t there, but he gets it! I do think it does a good job of showing the struggle that we went through.

In the film, you say that the ocean is always “actively trying to kill you.” That was such an interesting way to look at it.

Tracy Edwards: It’s just a very sensible thing to keep in mind, because if you have that in your mind then you are very aware of the fact that it’s not going to make friends with you. It’s not going to react a certain way because you don’t like it or you like it. It does what it does. It does its own thing. You have to come to terms with that and you have to understand that and respect that. It’s a very honest part of your life.

It was so striking in the film that, even when you and your crew achieved such an amazing feat, sailing in your bathing suits elicited such a misogynist response from the press and other sailors in the race. That must have been infuriating.

Tracy Edwards: I think that all of us wouldn’t have done it if we hadn’t won two legs [of the race]. We felt that we had won the right to wear whatever the hell we like. I have had younger women come up to me and say, “You should be proud of doing that because you’ve earned the right.” I think any chauvinistic reaction we got from that was completely ignored. I think the stuff we did get annoyed about was the almost inability of some people to accept the fact that we had won legs and had done really well. We were like, what else do we have to do to prove this?

The film shows you drinking your first beer after completing the race and your facial expression is absolutely priceless. It looks like the most refreshing drink of all time. Do you remember that moment fondly?

Tracy Edwards: Yeah [laughs]. We were very cheap dates because you couldn’t drink alcohol on the boat. One beer and that’s it, you’re done for the evening. Everything is a heightened treasure when you go sailing. You do spend a lot of time thinking about food. We freeze-dried food on the boat, which is basically mush. You think about biting into an apple or crunching into something. I used to dream about glasses of milk. I would picture them cold with condensation running down the outside. We would torture ourselves with these images [laughs]. Of course, when you get in, often in life things aren’t as great as you’d imagined. But of course, after spending six weeks at sea, you bite into an apple and it’s everything you wanted it to be and you savor every moment!