The Washington Post reported Sunday about a possible increase of U.S. troops in Afghanistan by a thousand, as military officials say that, under Trump’s watch, they expect total forces to reach 15,000 come spring 2018.

But that’s not all the Post reported. During a meeting last year, Indian Prime Minister Narendra Modi told Trump, when it comes to the U.S. in Afghanistan, “never has a country given so much away for so little in return.” And according to senior administration, the president has been known to imitate the prime minister with an Indian accent.

If this report is true, does this come at a surprise? That’s for you to decide.

Trump has imitated other groups in the past. As Slate pointed out, he used broken English when imitating Chinese and Japanese negotiators during one of his campaign rallies.

.@realDonaldTrump on what he expects to hear when negotiating with China: “We want deal!” #2016 #GOP http://t.co/eeOZPEwyjX

And in a speech back in October regarding the aftermath of Hurricane Maria, Trump seemed to mock Puerto Rico by saying the country in a Spanish accent of sorts.

As it turns out, this wasn’t the first time Trump’s impersonated an Indian accent. During a rally in Delaware, when discussing the need to bring back jobs to the U.S., he adopted a fake Indian accent to impersonate a call center representative.

He recounted a time he phoned his credit card company to find out where their customer support was based. “‘We are from India,'” Trump impersonated, continuing, “Oh great, that’s wonderful,” before pretending to hang up the phone. “India is a great place. I am not upset with other leaders. I am upset with our leaders for being so stupid.”

When Prime Minister Modi visited the White House in June, he reportedly hugged Trump three times during a joint press conference in the Rose Garden (three!). Modi and Trump might run into each other this week at the 48th annual World Economic Forum in Davos, Switzerland — but this time there may not be as many hugs to go around. 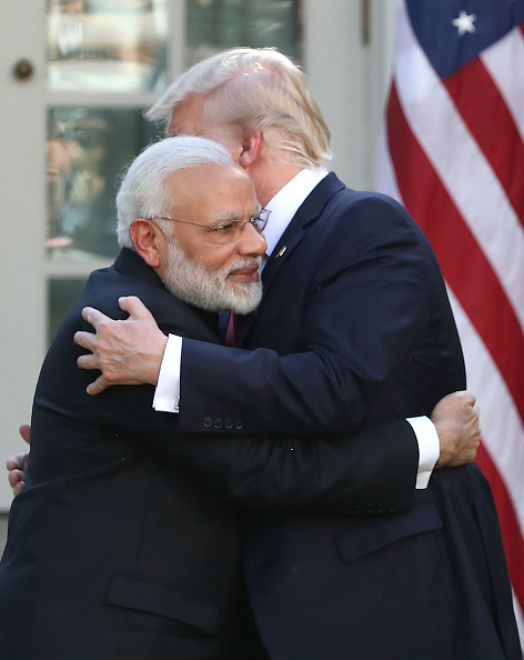