Cosby Show actor Geoffrey Owens is speaking out after being shamed for his Trader Joe’s job. The 57-year-old, who played Elvin Tibideaux, from 1985-1992 on the family sitcom is now seeing an outpour of support after pictures of him bagging groceries went viral.

A woman by the name of Karma Lawrence was in the New Jersey Trader Joe’s when she spotted the famous married actor working to support his family. Lawrence snapped a photo and that instantly had Geoffrey Owens running for the door after the woman sold it to media news outlets.

“All of a sudden, it’s out there,” the Cosby Show actor said after a reporter reached out for a comment. “A terrible picture which of course I have to say is Photoshopped.” 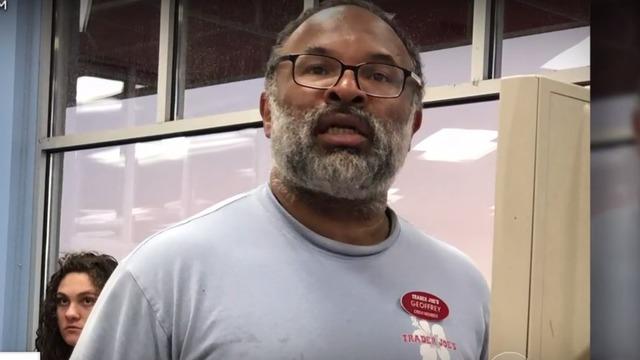 Feeling as though his privacy had been invaded and he was being shamed for his Trader Joe’s job, Geoffrey Owens called his manager and left his position for the time being.

“For the sake of my own comfort and dignity, I didn’t feel like I could be in that position,” he said. “And that’s why I left.”

After receiving support from his fellow actors and others on social media, Geoffrey Owens no longer feels ashamed following the viral photo of the performer bagging groceries.

“Work is honorable, work is noble,” he said. “And some jobs are not better than other jobs, and no one should be shamed for doing. What’s wrong with working?”

Since the incident, Geoffrey Owens has received an offer from fellow star Tyler Perry via Twitter.

“#GeoffreyOwens I’m about to start shootings OWN’s number one drama next week,” Perry tweeted. Adding, “Come join us!!! I have so much respect for people who hustle between gigs. The measure of a true artist.”

#GeoffreyOwens I’m about to start shootings OWN’s number one drama next week! Come join us!!! I have so much respect for people who hustle between gigs. The measure of a true artist.

Will Geoffrey Owens go back to acting?

Since appearing on Good Morning America to talk about being shamed for his Trader Joe’s job, the Cosby Show actor has shared that he has received several offers and is grateful but wants to make sure that any future roles he takes on are the right fit for him.

“I wouldn’t feel comfortable getting acting jobs from this event,” Geoffrey Owens said on the show. “I wouldn’t mind getting auditions. I don’t mind if people call me to try out for things, due to what’s happened … I want to get a job because I’m the right person.”