UConn to the Big 12 – The latest on potential conference expansion 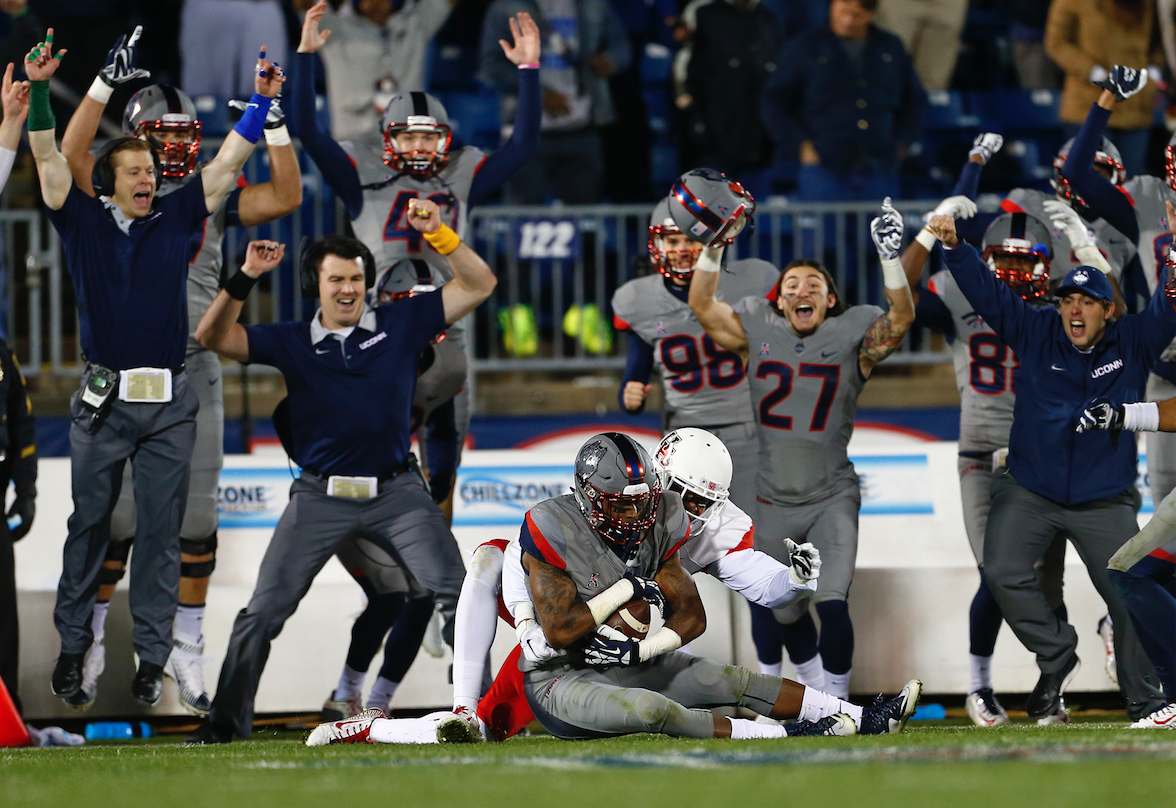 UConn is looking to find its way into the Big 12 conference.
Getty Images

If geography is the biggest hurdle in getting UConn into the Big 12 conference, as the Hartford Courant recently suggested, then consider the Huskies golden.

We live in a sports world these days where the NFL is seriously considering adding a team – an actual pro football team that plays actual games each and every Sunday afternoon in the fall – in London, England. The NBA now plays actual games in Mexico. Hell, UConn basketball played on the deck of an aircraft carrier in Germany four years ago.

Money is no object for those involved in big-time pro and collegiate sports. As long as TV execs continue to shell out billions, travel is not a worry for those in power of major athletic schools.

Also, this is 2016. Private flights are the norm. Bull Durham-like bus rides are passe. This is the way the big boys travel, and the Huskies are lined up to be joining the big boys.

Even a four hour trip is nothing, especially when you consider the bus rides UConn used to take back in the Big East days. (Anyone up for a road trip to Syracuse on this fine January morning?).

Major college sports long ago stopped worrying about geography. Look at UConn present day. UConn routinely travels to Houston and SMU. In the Big East, Providence has to travel to Creighton. In the ACC, Syracuse has to travel to Miami.

The Dallas Morning News’ Chuck Carlton, a man very much in the know when it comes to Big 12 dealings, held a recent chat and most of what he said was good news for UConn supporters hoping to land in the conference. Here are some UConn-specific highlights.

Q: Are we looking at a possibility of UConn and Houston being the adds if the final three list is supposedly Houston, UConn and Cincinnati? Also could it happen if both blow away on the presentations this week? Last could Big 12 add four with BYU (full or football only), Uconn, Cincy and Houston? I heard from some Wake Forest booster that the Big 12 will add four schools with BYU football only, Uconn, Cincy, and Houston as full members.

Carlton: I wouldn’t dismiss UConn as emerging, especially if BYU is not added. It would be difficult to have UConn and BYU in the same conference as full members from a geographic and scheduling standpoint. Who knows what might sway a president between Houston/UConn/Cincinnati. Maybe there’s a personal connection. Maybe some presidents still like the idea of taking a flyer on Florida if Big 12 adds four. What does West Virginia want as the Big 12’s eastern outpost?

Carlton: I don’t know that the presentations will change the number of schools the Big 12 adds. Other factors will play a role on that, including money and the talks with TV folks. The Big 12 has tons of data right now on each school. I don’t think anything [Big 12 commissioner] Bob Bowlsby hears will surprise him. But I do think a school could diminish its chances by a bad or off-base presentation that might alienate folks.

Q: Do you think anything official happens before the October 17 board meeting? If they’re conducting final interviews this week, five weeks seems like a long time to make a final decision.

Carlton: It’s possible but there is a lot of legwork to be done after the interviews as well as regarding TV and possible exits from conferences like the AAC. For now, Oct. 17 seems like the target date. But could something happen sooner if there is a consensus? Certainly possible.

Q: What do you think the percentage breakdown is between football, basketball, baseball, and other sports. The majority of the focus seems to be on the school’s football program but basketball brings in a lot of money as well. #ponyup

Carlton: Football still drives the train. Remember, in the 2010 round of expansion that even Kansas was going to be left out initially and the Jayhawks are on the short list of basketball blue bloods. Basketball helps but football is paramount.

Brains of the operation

We’re talking big-time college athletics here, so obviously academics don’t really matter. If Bowlsby does care to look at the books on books, however, he’ll find that UConnwould be a welcomed addition to his conference. The US News & World’s Report on the top public universities in the country recently came out and UConn again fared well. UConn ranked No. 20 in public schools, well ahead of their expansion competition (BYU ranked 68 and Cincinnati ranked 135th). When compared to current signature Big 12 schools, the Huskies also fared well. Oklahoma was ranked 51st and Kansas was ranked 56th.