UPDATE: Does Negan die in The Walking Dead? – Metro US
Television

UPDATE: Does Negan die in The Walking Dead? It’s not long until you’re going to get launched back into all out war with the midseason premiere of AMC’s hit post-apocalyptic show. And though you’ve ridden out some big baddies with your favorite characters through multiple seasons, Negan takes the cake for being the worst of them all. So, does Negan die in The Walking Dead? We know you’re wondering (and probably hoping).

Even fans of Jeffrey Dean Morgan — maybe especially those who know and love him from his brief but unforgettable role as Denny on Grey’s Anatomy — are ready for the bloodshed to stop. After all, you have to be pretty terrible to out-rank cannibals on the list of top tier villains. But does Negan die? Is that how it all ends?

So, does Negan die in The Walking Dead? What the comics say…

Of course there’s no way of knowing where the show will go, especially now that they killed off Carl when the character takes over as leader in place of Rick in the comics and, therefore, plays a key role in the series on paper. The creators of the AMC show have proven that they’re willing to break with the comic series, even on big issues. Still, it’s the primary place to look for hints about characters’ fates and an answer to the question does Negan die as The Walking Dead appears on AMC.

So does Negan die in The Walking Dead if we’re talking about the comics? Surprisingly, no. You would think the other characters would seize their first available opportunity to take out the killer, but they don’t. Negan is eventually dethroned as the leader of the Saviors, but he’s given a life sentence and incarcerated instead of killed. 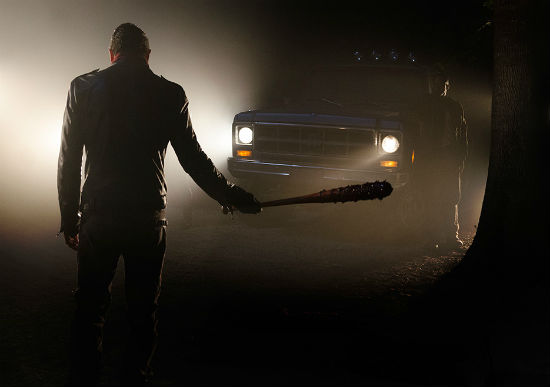 If you’re shocked by that, you might want to sit down for this tidbit from the books: Negan actually wins over Rick. As in, Rick finally comes to trust Negan despite the fact that this violence-loving lunatic also kills Glenn in the comic series. Isn’t that a kick in the stomach?

But does Negan die in The Walking Dead — on the TV show?

The creative team behind The Walking Dead is notoriously tight-lipped about these things, but Jeffrey Dean Morgan raised the possibility that Negan will be around for a while back in 2016. “Yeah, I’ll be around for a little while,” Morgan told Playboy magazine about his character’s presence after the seventh season. We’re already seeing that as Negan wreaks havoc throughout the on-going eighth season. But the actor also added, “If we keep going at this rate, and if they follow the comic book, that could be three or four seasons.” 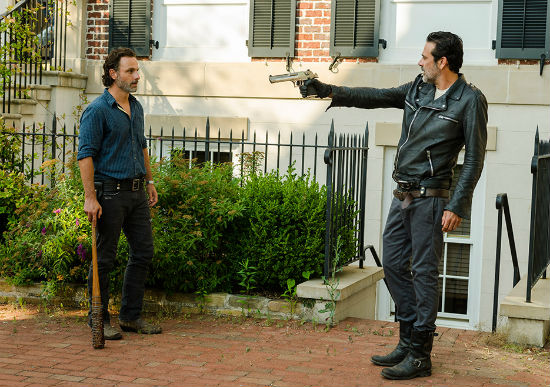 Will the show follow the arc of the comics and actually turn Negan into someone Rick considers an ally? Only time will tell. Metro US was tracking news about Jeffrey Dean Morgan’s contract with The Walking Dead for hints about Negan’s fate, but after the season eight finale of the hit AMC show, it looks like they just might be following the comic book for this character’s fate. Though Rick slashed Negan’s throat during a much anticipated showdown during the finale that aired Sunday night, Rick ultimately took the advice Carl had written from his death bed, urging his father to be merciful. He saves Negan’s life, but throws him in a cell, telling him he’ll rot there.

But will Jeffrey Dean Morgan’s character win Rick’s trust like he does in the comics, or will Rick grow tired of his long-time enemy and finally put an end to him? Only time will tell. Check back for updates and hints about the answer to the question does Negan die.