UPDATE: When will they hold the net neutrality vote? – Metro US
The Big Stories

UPDATE: When will they hold the net neutrality vote?

The net neutrality vote is looming, and if you feel like the future of the internet — and many of your bills — hang in the balance, you’re absolutely right.

Even if you’re unfamiliar with the concept of net neutrality, you’ve heard more people talking about it in the last month. The vote, though occasionally masked in the news by the ongoing debate and vote conjecture swirling around the GOP tax plan, stands to shape how you can interact with the web — and how much you’ll pay for it.

If the existing net neutrality regulations are struck down, as Pai advocates, Internet service providers (ISPs) will be able to throttle or block traffic and even sell “fast lanes” that will give larger businesses, who can afford the costs, an advantage in reaching consumers.

We have a primer on what is net neutrality if you want more details.

When is the net neutrality vote?

The net neutrality vote is currently planned for Thursday, December 14, a date that’s been pushed by FCC Chairman Ajit Pai. The vote stands to repeal many of the agency’s current net neutrality rules, and many experts predict the repeal will push through.

But this isn’t the first go-round with this. The Trump administration tried to move on the net neutrality vote over the Thanksgiving long weekend, while most of the public was distracted with traveling, cooking and (stressful) family get-togethers. 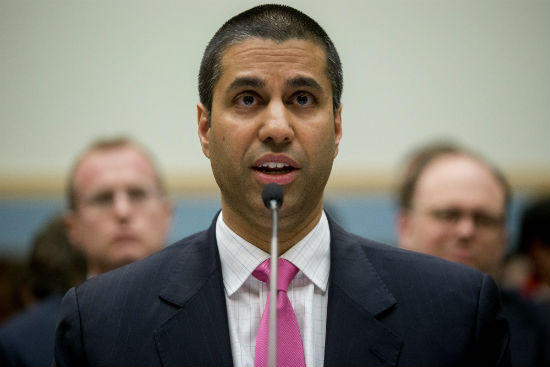 The timing was suspect to many. “There’s a reason that Pai is releasing a plan that he knows will be overwhelmingly unpopular with voters from across the political spectrum on one of the busiest travel days of the year when many journalists are out of the office,” Evan Greer, campaign director of Fight for the Future, told Mashable.

But public and consumer interest groups are advocating for that date to be pushed back.

When do these groups want the net neutrality vote?

Groups working to protect the public are urging the government to wait until a verdict is issued in a 9th Circuit Court of Appeals case. They’re arguing that repealing many of the existing net neutrality rules without having a decision in the case leaves consumers unprotected.

That’s because Pai is saying that, in the event that current net neutrality rules are repealed, ISPs (internet service providers) will be bound by rules that essentially require some transparency in how they handle web traffic. Most consumer complaints would then be handled by the Federal Trade Commission (FTC). 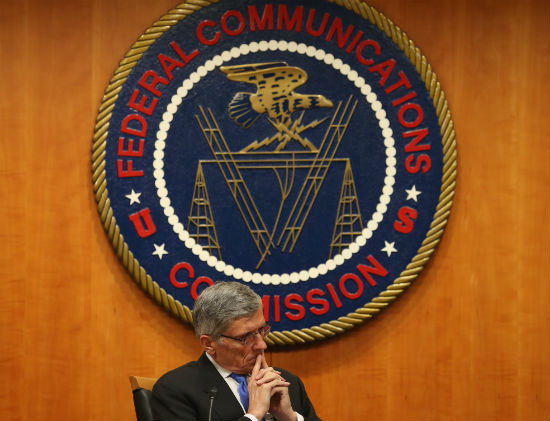 For this reason, pushing forward the net neutrality vote before this decision on FTC power is passed down creates “‘regulatory gap’ that would leave consumers utterly unprotected,” according to the letter these groups sent Pai.

“In short,” the letter explained, “the FCC has decided to put all remaining consumer protection eggs in one basket, but cannot be troubled to wait until the Ninth Circuit affirms that this approach is actually consistent with the FTC’s own jurisdictional statute.”

“This is just evidence that supporters of heavy-handed Internet regulations are becoming more desperate by the day as their effort to defeat Chairman Pai’s plan to restore Internet freedom has stalled,” an FCC spokesperson commented, concluding “The vote will proceed as scheduled on December 14.”

Keep checking back with Metro US for updates on this developing story.

Another call for a delay on the net neutrality vote

Even more people are calling for a delay on the net neutrality vote as of the morning of Tuesday, December 5. The vote is still currently scheduled for Thursday, December 14. This time, it’s Democrats leading the charge to bump the date back further.

After it was revealed that millions of comments submitted to the FCC on the issue of net neutrality were fake, New York Attorney General Eric Schneiderman called for the net neutrality vote to be delayed. Schneiderman, a Democrat, says that the fake comments — some of which were made by commenters using stolen identities — point to “identity theft on a massive scale.”

Schneiderman’s call to delay the net neutrality vote is being supported by Jessica Rosenworcel, one of two Democratic commissioners at the FCC, pending a full investigation into the fake comments. “The FCC is on course to eliminate net neutrality guided by a record corrupted by hundreds of thousands of filings with stolen identities,” she said.

First Republican calls for a delay of the net neutrality vote

Rep. Mike Coffman (R-Colo.) became the first Republican to call for Pai to delay the vote on net neutrality after hearing from many of his constituents. In a letter that he sent to Pai and posted publicly to Twitter, Coffman asked that Pai “delay [his] upcoming vote and provide Congress with the opportunity to hold hearings on the net neutrality issue.” Although he hopes that they can “pass permanent open Internet legislation,” he believes that Congress can “find the right balance of light-touch regulatory authority while celebrating the same open Internet protections that exist today.” He cites, as some of the reasons that he’s standing behind open Internet and suggesting a delay in the net neutrality vote that the legislators that worked on the existing rules “have given the nation a highly successful and popular space notable for free markets, free expression and for the tremendous growth in the Internet economy.” You can read the full text of his letter in the tweet below:

Thx to everyone who has contacted me in regards to #NetNeutrality. Below is the letter I sent to Chairman @AjitPaiFCC today to ensure the continuation of a free and open #internet. pic.twitter.com/oKqh7lxaLI

In addition to Coffman, other Senators have expressed their displeasure in Pai’s actions toward ending current net neutrality rules, asking the FCC to end its “reckless plan to radically alter the free and open Internet as we know it.” Among those who signed the letter are 37 Democratic Senators and Sen. Bernie Sanders (I-Vt.) and Sen. Angus King (I-Maine). The letter claims that the actions taken by Pai show a dereliction of duty on the part of the FCC. They write that Congress gave the FCC the “primary responsibility to protect consumers and the public interest with respect to the nation’s communications networks” and that the current proposal shows that they have “decided to throw overboard those long-standing responsibilities.”

“In short,” they write in one particularly scathing comment, “you are walking away from your statutory duties.” There was no response from the FCC at the time of publication.

What the New York Attorney General has to say about it

Attorney General Schneiderman has been vocal about wanting a delay in the net neutrality vote, citing the 2 million fake comments added to the FCC website, many of which used stolen identities. This morning, Schneiderman’s office released a statement from the Attorney General, whose stance on this issue hasn’t budged.

“Millions of fake comments have corrupted the FCC public process – including two million that stole the identities of real people, a crime under New York law,” said Attorney General Schneiderman in the press release. “Yet the FCC is moving full steam ahead with a vote based on this corrupted process, while refusing to cooperate with an investigation. As we’ve told the FCC: moving forward with this vote would make a mockery of our public comment process and reward those who perpetrated this fraud to advance their own hidden agenda. The FCC must postpone this vote and work with us to get to the bottom of what happened.”

The press release included the photo below, which shows how many fake comments were logged using stolen identities by state. As you can see, in states like California, New York, Texas and Florida, that number surpasses 100,000. 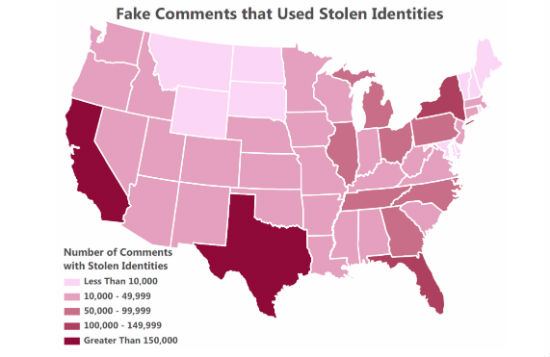 Schneiderman’s office also released a letter he sent to the FCC, responding to one of their own received by the Attorney General earlier this week. In their letter, Scheiderman claims it is made clear that “the FCC has decided to refuse assistance to the law enforcement investigation by the New York State Attorney General’s Office.”

“One might expect a federal agency to harbor a great deal of concern when faced with strong evidence of a massive fraud uncovered by multiple sources,” Schneiderman continued in the letter, expressing shock that the FCC “appears determined” to hold the net neutrality vote as planned on December 14, despite growing objection by a bipartisan list of politicians. He claims their statement is indicating that the FCC leadership is “blithely ignoring clear evidence” of fraud and once again urges them to delay the planned net neutrality vote in order to hold hearings on the fake comments.

Another Republican calls for cancellation of net neutrality vote

Republican Senator Susan Collins is also calling on FCC Chairman Ajit Pai to cancel the vote that appears to be proceeding as of the morning of Thursday, December 14. She and Senator Angus King released a letter early Thursday morning, claiming it’s a “matter of enormous importance” for Pai to cancel today’s net neutrality vote. The two Senators from Main (Collins, a Republican, and King, an Independent) urge the chairman to cancel the vote in order to hold hearings on the fake FCC comments.

“Repealing the FCC’s net neutrality rules will undermine longstanding protections that have ensured the open internet as a powerful and transformative platform of innovation and economic opportunity,” the senators wrote, echoing earlier sentiments from politicians such as Rep. Mike Coffman (also a Republican).