Randy Furniss, a Nazi, received a hug from Aaron Courtney on Thursday during a Richard Spencer event at the University of Florida. Credit: Getty Images

A video showing a black protester hugging a Nazi outside of a Richard Spencer event at the University of Florida has gone viral.

On Thursday, a man wearing a white T-shirt with swastikas attended a speech for white supremacist Richard Spencer at the Universtiy of Florida. According to the Daily News, the Nazi, who was later identified as Randy Furniss was surrounded by a crowd of anti-Nazi protesters and was screamed at and punched before Aaron Courtney gave him a hug.

The video, posted by Twitter user “Politics 4 Dummies” shows the 31-year-old high school football coach from Gainesville hugging the Nazi and asking him, “Why you don’t like me, dog?” The Nazi appeared to be motionless as he was being hugged by Courtney. “Give me a f—–g  hug!” he shouted.

On Friday, Courtney told the New York Daily News that he could have hurt the man or got into a fight with him.

“I asked him, ‘Why do you hate me? What is it about me? Is it my skin color? My history? My dreadlocks?” Courtney said. The Nazi turned his head to avoid the questions being asked him, according to Courtney’s account. Still, something in him told Courtney to hug the white supremacist.

“Something in me said, ‘You know what? He just needs love. Maybe he never met an African-American like this,” he said.

“I reached over and the third time, he wrapped his arms around me, and I heard God whisper in my ear, ‘You changed his life.’”

The photo below, captured by photographer Brian Blanco shows Furniss getting hit in the face by someone in the crowd shortly before Courtney pushed his way through the crowd to give him a hug. 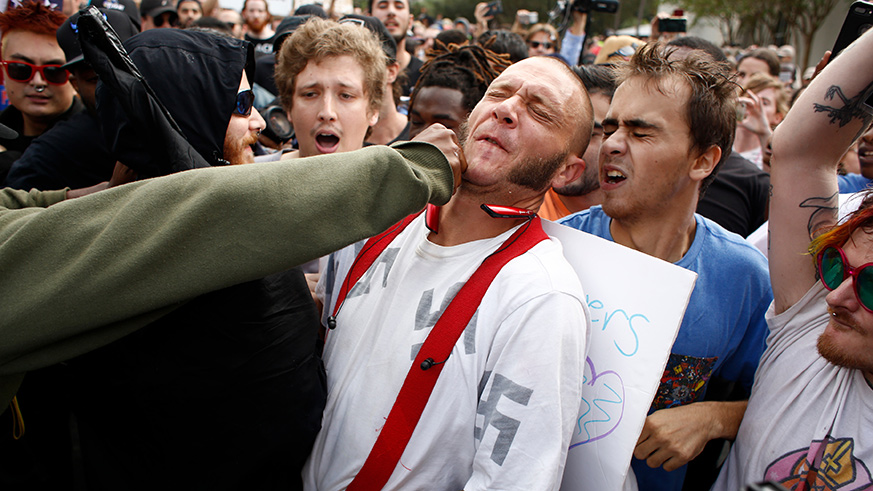