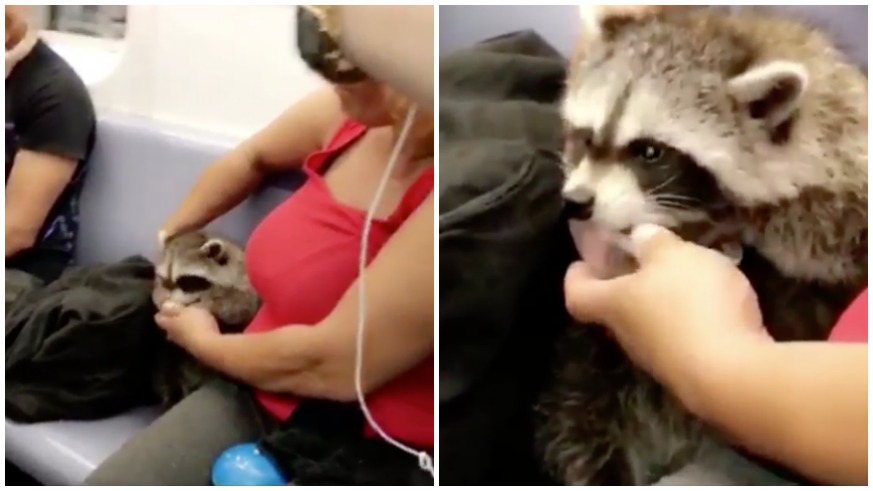 Subway riders are a hardened lot, unfazed by hellacious delays, the transformation of cars into sweatboxes and odors previously unknown to humanity.

But when inhumanity literally boarded the train last week, even the most hardened straphanger choked back panic and vomit. A woman brought a raccoon onto an uptown 6 train.

NYC subway rider Brooke Hogan — who saw something, filmed something, then Instagrammed it — posted video of the animal chilling on a subway seat next to the woman. The two appeared to be acquainted. It snacked from a plastic bowl she was holding, licking vigorously and occasionally gripping it with its paws. Other occupants of the car seemed calm, in that there was no screaming.

“The NYC subway has officially turned into a godd–n Six Flags Safari.”

“Never sitting on the train again.”

“I’m not sure if I’m laughing or throwing up.”

“Are you kidding me?? How did people not freak out??”

“New York subway is just game over, not even playing anymore.”

Clearly flouting the MTA’s posters that condemn onboard eating, the creature was apparently brought onto the train in a black carrier, which occupied the full seat to its left. The sex of the animal was undisclosed, so it’s unclear if this was manspreading.

“New Yorkers know that, when you are hungry and on the go, the closest and quickest food spot will do. Raccoons understand this feeling all too well,” says the city’s official wildlife website at nyc.gov. Although the site contains a full page on the creatures, they are illegal to own: You’re not allowed to have them without a license, and licenses aren’t issued for pet wildlife.

The city says raccoons pose “no risk” of spreading disease to humans. The number with rabies is small, and the city and state have worked together to vaccinate them since 2014. But the city’s wildlife site says it’s unwise to feed them.

“There are many ways to describe the average New Yorker: adaptable, resourceful, always on the lookout for a free meal,” the site says. “Coincidentally, these are qualities also shared by New York City’s raccoons. Perhaps it should come as no surprise. After all, city living can be tough, regardless of your species.”

The MTA has not commented.