Was Ruth Bader Ginsburg involved in On The Basis Of Sex? Here’s what Felicity Jones told us - Metro US
Movies

Was Ruth Bader Ginsburg involved in On The Basis Of Sex? Here’s what Felicity Jones told us

On The Basis Of Sex star Felicity Jones and its director Mimi Leader have confirmed that Ruth Bader Ginsburg was heavily involved in her own biopic, which primarily revolves around the groundbreaking 1970s tax case that launched her career.

But rather than joining the film at the latter stages, Ginsburg was involved from the very beginning, as the script for On The Basis Of Sex was written by her nephew Daniel Stiepleman.

How involved was Ruth Bader Ginsburg in On The Basis Of Sex?

“Ruth oversaw everything. She was obviously very meticulous,” Jones tells Metro. “Her nephew Daniel had written the script, and they in many ways had developed it together. She had given a lot of notes after each draft.”

“She was fully on board with the film and she had seen The Theory Of Everything [which earned Jones an Academy Award nomination for Best Actress] so I had her blessing. That made me feel safe and I knew that this was the truth and it was an intimate portrayal of her life. It was all about showing how she became the icon that she is to this day.”

During this process Ginsburg was eager to alter the script to give her husband of 56-years Martin Ginsburg, played by Armie Hammer, the credit he deserved.

“It was originally written to show that Ruth was the one that was pushing the case. But then Ruth said to him, ‘No that is not what happened. Marty brought the case to me’ Sometimes the truth is better than fiction. That unwrapped this whole story of two people working together to affect change. And how powerful that can be.”

“They’re a group of superheroes really. That’s why it is such an important film. Because when you look back on this idea of the genius there is always some one in the background helping out. That’s a fallacy. People achieve what they achieve by helping others.” 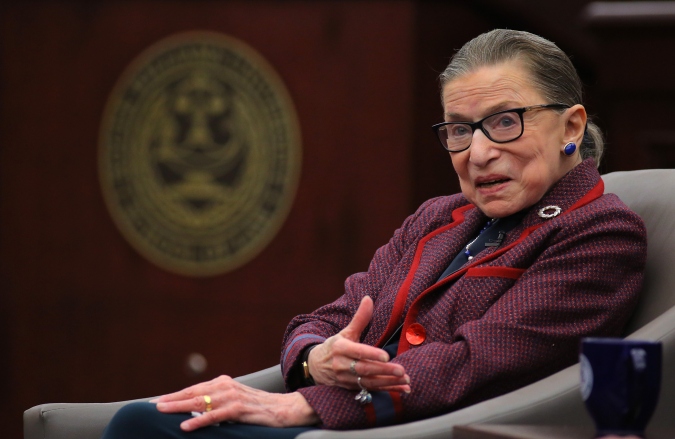 Clearly, Ruth Bader Ginsburg is rather happy with On The Basis Of Sex, too.

“She has seen it three times,” reveals Leder. “She loved the film. I would say the thing that she said about it was, ‘The 60s was a joyous time. It wasn’t an angry time, it was a joyous time.’ She felt the film reflected that joy. And she is very proud of it."

On The Basis Of Sex is in theaters now.