Jeremy O. Harris’s “Slave Play,” directed by Robert O’Hara and now running on Broadway at the John Golden Theatre, is surprising, risky, joyous, difficult theatre. It is fantastic. It’s challenging to talk about the play without giving its premise away, but I will say it is a show about sex, race, slavery, and the Black experience in the United States. It is a non-negotiable must see.

The show opened at the New York Theater Workshop last fall (when Harris was still a Yale MFA student and O’Hara his professor) to critical acclaim. It opened at the Golden on Sunday, the Broadway debut of Harris, O’Hara and several cast members, and has already extended its run through January 19th. The production must close on the 19th, so I implore you to see this show while it takes up well-earned and fully deserved space on Broadway, a space usually reserved for less provocative and boundary-pushing pieces. 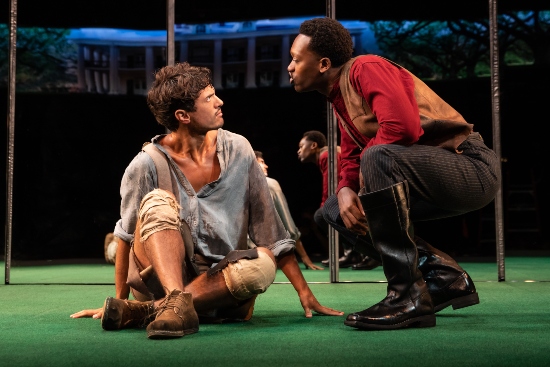 “Slave Play” examines who is silent and who makes noise and the layers and centuries of history that contribute to this phenomenon. It opens with…the audience. Sort of. The set, designed by Clint Ramos (Once on This Island), is a simple green floor and a rear wall of mirrors. We as are forced to look at our awkward selves filing into the theatre, finding our seats, excusing ourselves as we navigate a space in which New Yorkers are forced (albeit briefly) to acknowledge each other. And then, once we settle into our seats, we are struck once again with the sight of ourselves. Suddenly, the audience is on view to the audience. You’re not allowed to mess around if people are watching you watch the play, and that is good because this is a show about listening. It is absolutely essential that the audience pays attention to these characters and their stories and experiences, particularly since Broadway audiences are historically white and old, and the bodies and stories onstage are young, black, and, during the course of the show, ignored. By forcing our minds to choose between gazing at ourselves and watching others, we must choose to turn away from ourselves to see others. It could not have been more effective.

In addition to the mirrors, the stage is decorated with screens depicting trees, jungle, a lush forest. Is this flora representative of the Garden of Eden before the fall of man? The jungles of Africa? The impossible to navigate jungle of the mind? There’s no time to process, as this play is performed without an intermission. You must take in all two hours of the show without a break, without the chance to unsilence your phone and check your texts and revert back to the comfort of the world you know. It drags slightly in the middle, but the final scene left me stunned. Harris and O’Hara don’t relent, and audience members are not given respite from the difficult issues the show brings up, even as the show features many of the funniest moments I’ve seen on Broadway. The show begins with three “couples” in Antebellum America: a black female slave (played by Joaquina Kalukango) and her white overseer (Paul Alexander Nolan), a plantation owner’s wife (Annie McNamara) and her “mulatto” servant (Sullivan Jones), and a white indentured servant (James Cusati-Moyer) and his black overseer (Ato Blankson-Wood). Something…is slightly off. Kalukango’s character Kaneisha hears Rihanna’s 2016 “Work” over…a radio? It’s unclear to both her and us, but she immediately begins twerking. Anachronistic details such as Calvin Klein underwear (costume design by Dede Ayita) and dildos work their way into the vignettes, accents seem to slip occasionally, actors appear to step in and out of character, and as a viewer, I was confused. But stick around, because it all begins to come together. Trust me when I say O’Hara’s direction makes no missteps, and anything that seems out of place is very much placed there.

The play features a big, surprising reveal, where the show and the work of dismantling white supremacy really begin, but I refuse to spoil it. All I can say is I urge you to pay attention to the twists and turns as they occur. And if you’re confused at first, it’s okay.

The acting is fantastic. Philip, played by the charming Sullivan Jones, is hot. And that’s, like, a thing in the show, not just my unsolicited appreciation of the male form. He’s also very funny and very good at acting. Annie McNamara plays Alana, a spot-on ball of anxious energy and a perfect example of one of those white women who equates the oppression of white women to that of racial oppression. Speaking as a white woman, being a woman sucks sometimes! But if your feminism isn’t intersectional, it’s incomplete. (Ok, rant over.) McNamara is excellent in the role, trying so hard to get it right but failing so profoundly over and over again. Joaquina Kalukango plays Kaneisha, a character difficult to get a grasp of as she bubbles away internally throughout the show until she just. Can’t. Take. It. Any. Longer. And. Explodes. She’s magnificent, and her performance in the final scene is entrancing and heartbreaking. Chalia La Tour and Irene Sofia Lucio appear later in the show; pay attention to the dynamics between the two women and to La Tour’s growing, fuming frustration throughout.

As a white audience member of the show who considers herself to be socially/politically/racially aware, I left the show feeling troubled about my privilege. What an effective piece of theatre that forces audiences to look at themselves (both literally during the show and internally after it) and really consider their inability to see and hear the marginalized voices around them. The show asks that we listen. It doesn’t ask us to stand and clap after, but a standing ovation was unavoidable for such an unexpected and moving piece of theatre.

Head here for more tickets and information on ‘Slave Play’.