Every notable executive and high powered figure taken down by allegations of inappropriate behavior represents a drop in the bucket when you consider the countless people who are too scared to speak up against their own abusers. So the question is: What constitutes workplace harassment? And furthermore, when is it time to take action?

In a recent study by the Equal Employment Opportunity Commision, it’s reported that 75% of people who spoke up about workplace harassment were greeted with some form of retaliation from whoever they reported the incident to. With this number in mind, it’s easy to see why so many instances of harassment go unreported at work, and why it took so long for something like the #MeToo movement to shake things up for the better.

1. “I’ll scratch your back if you scratch mine”

According to the U.S. Department of Labor, there are a few lines that should never be crossed by your employer. One of these specific situations is when your boss proposes a quid-pro-quo (or an “I’ll scratch your back if you scratch mine”) agreement in order to help you out professionally. These agreements constitute workplace harassment and can be considered unlawful if the following scenarios play out:

1.) You’re fired or denied after refusing to be sexually cooperative with your boss

2.) If your boss requires your office to partake in religious activities, lest employees be fired

3.) If your boss gives other employees preferential treatment if they agree to enter a sexual relationship with them or partake in the religious activities they force on your workplace 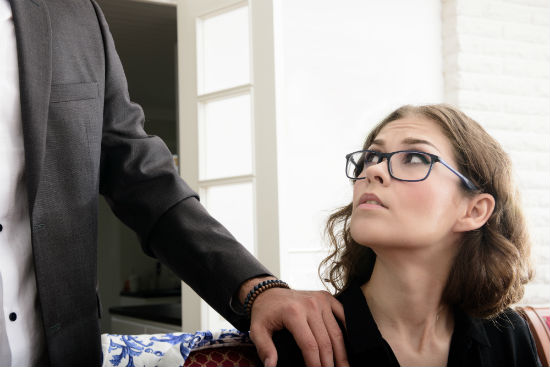 While some bosses try to abuse their power with the kind of situations discussed earlier, some are simply just slimy and irrational. However, if your boss is outwardly disgusting to you in ways that make your skin crawl, chances are that behavior constitutes workplace harassment.

Examples of this horrid behavior are as follows:

1.) If your boss brags about or discusses his — or her — sexual exploits in front of you

4.) Suggestive comments on your physical appearance

5.) Putting up pictures around the office that display either gross sexual or religious depictions

6.) Using racial slurs or other demeaning phrases that make you feel uncomfortable

7.) If they continually use insensitive language or gestures around the office

8.) If your boss sabotages your work for no good reason

9.) And lastly, if they straight up physically attack you

When does it become illegal?

Basically, if any of these situations happen at your place of work it is considered illegal workplace harassment. Sometimes it may not bother you as much if your employer does not exude this kind of behavior frequently. But you know what they say, if you give them an inch, they’ll take a mile.

That’s why it’s so important to report abusive employers for workplace harassment immediately. No one wants to spend their days in a retroactive work environment. So if you experience this kind of harassment, make sure to report it to human resources right away. Don’t have an HR Department? Look to your boss’s boss. Work for a chain (be it a store or a restaurant) and don’t feel comfortable speaking to your manager (especially if the abuser is, in fact, your manager)? There is likely a central (and often times anonymous) number you can call at the head office.