What is a sukkah? - Metro US
Lifestyle

What is a sukkah? Although more rural communities have more private space to build their sukkah, Jewish city dwellers are pressed for space, which is why you’ll see them in some city parks. If you live in New York, you might have seen some on the Upper East Side, like the one in Carl Schurz park at 84th Street and East End Avenue, seen in the picture below.

At Google headquarters in New York, the company has reportedly built two of the structures, an initiative that’s spread across all of its offices worldwide. These huts at the global giant offices are even equipped with video conference equipment, Lego building stations and select workout gear according to Jewish Week. It’s a high-tech take on the tradition.

A sukkah is a traditional part of Sukkot

Sukkot 2017 starts at sundown on Wednesday, October 4 and ends at sunday on Friday, October 13. During the middle part of this weeklong holiday, meals are traditionally eaten in the sukkah, and some observers spend as much time as possible there, even outside mealtime. 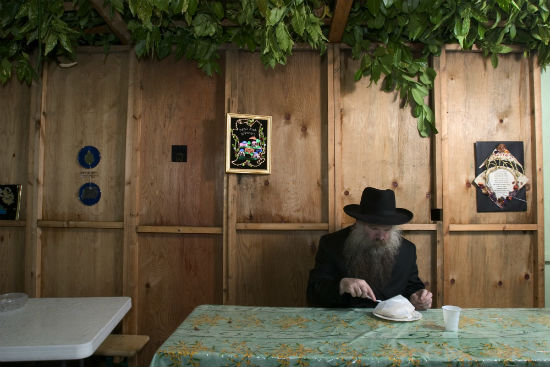 So, what is a sukkah?

A sukkah, or succah, is a traditional structure erected for Sukkot that’s under the open skies and has at least three walls and a roof made of natural vegetation that hasn’t been processed. Typical choices for the natural roof include bamboo, pine boughs or palm branches, according to Chabad.org.

It’s traditional to eat meals in the sukkah, as many as possible, with some more stringent observers going so far as to not eat or drink anything outside the structure. The meals on the first two nights of the weeklong holiday are especially important for time in the sukkah, but practice ranges from only eating meals in the traditional structures to sleeping in them.