What is curling, and is curling a sport? Everything you need to know - Metro US
Sports

What is curling, and is curling a sport? Everything you need to know Trust us on this one, you’re not the only one asking what is curling — or is curling a sport, for that matter. With the 2018 Winter Olympics rapidly approaching, you’re going to hear the term “curling” more and more often, and no, they’re not talking about weight lifting.

Wait, is curling a sport?

Yes, first of all, curling is indeed a sport. And, as you might have already guessed, it’s a winter sport, hence its appearance in the 2018 Winter Olympics and in your latest news feeds.

Turn on the TV quickly while curling is on might lead you to believe you’ve caught some break during a hockey game, but you’d be wrong.

So, what is curling exactly?

Curling is actually a long-standing game. There’s been a curling federation around since 1966 — that was renamed the International Curling Federation in 1991 — and curling as a sport made its Olympics debut all the way back in 1924.

The Olympic sport, also called “The Roaring Game” due to the sound of the stones used in the game as they travel across the ice, is a team sport. Tune into the 2018 Winter Olympics during the curling matches and you’ll see two opposing teams facing off, each comprised of four players.

How is curling played?

Think of curling as a slightly more confusing game of winter shuffleboard. The game is played on a sheet of ice — but not the kind of ice that you’ll see during other 2018 Winter Olympics events like figure skating or hockey. This is a special kind of ice. The rectangular rink is sprinkled with water, which freezes into tiny bumps across the surface.

A couple terms you need to know based on this before we move on. That playing surface is called “the sheet,” and the bumps are called “pebble.” It’s this “pebble” that causes the stones to “curl,” or deviate from a normal gliding path, hence the name of the sport.

OK, got all that? That’s keep going. 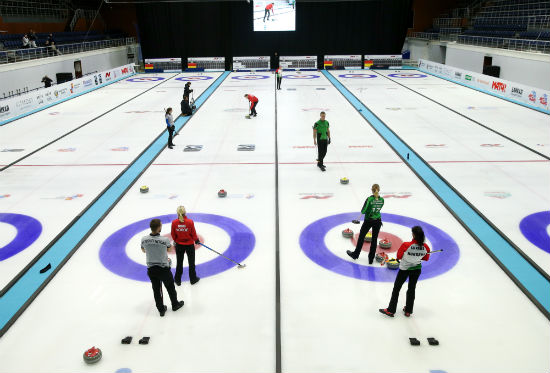 Each end of the sheet has a big bullseye or target that the players are trying to hit, and these areas are called “the houses.” The smaller circle at the center of each house is known as “the button.” At the end of the day, it’s all about getting your team’s stone closer to the button than the other team gets theirs. Easy enough, right?

Well, not so fast. How do they do that?

Remember those pebbles? They not only curl the path of the stone, meaning its harder to hit the house and the button, but also slow down the stone. Players try to counteract this with their brooms, which can help cut down the friction, helping the stone move farther along the sheet, closer to the house and, therefore, the button.

Each “end,” essentially an inning, involves both teams shooting eight stones at their house. Each player on the team is responsible for two of these stones per end.

Who’s who on the team, and what is all the yelling about?

Each curling team is made up of four players: a lead, a second, a vice-skip (or third) and a skip. Most of the time it’s the skip who’s doing the yelling — for a very good reason. It’s their job when the lead, second and vice-skip are delivering their stones to use their broom as a target for whomever is delivering and then, once the stone is moving or a “running stone,” to yell instructions about when and how hard to sweep to keep the stone moving and get it as close to the button as possible. When the skip is delivering their two stones for the end, it’s the vice-skip’s job to yell these essential instructions. 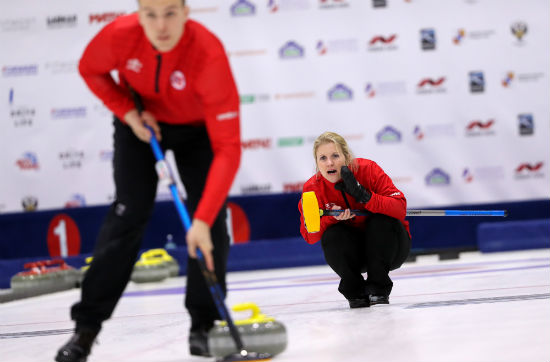 Although, especially when it comes to high pressure games like the ones you’re going to see in the 2018 Winter Olympics, some of the yelling might be out of joy or frustration — you’ll understand why in a second.

How curling is scored

The frustrating part is, your team can have a very, very good end and still score no points. Yes, really. When each end is finished, or when both teams have delivered their eight stones, only the team who got a stone closest to the button scores for that end. Yep. So, even if the other team has more stones close to the button, they can be knocked out of scoring completely for an end.

The scoring team gets a point for every stone that’s in the house and closer to the button than the other team’s closest stone. That means that they’re always going to score at least one point, but can earn up to eight points per end. A curling match lasts through 10 ends, or if the two teams are tied at the end, they go into over-ends or overtime.

If neither team gets a stone into the house in the end, it’s called a “blank end.” Makes sense. And, as you might imagine, it’s standard to use stones to knock opposing team’s stones away from the button or out of the house.