What is Quidditch? J.K. Rowling explains once and for all - Metro US
Lifestyle

What is Quidditch? J.K. Rowling explains once and for all What is Quidditch? Why, it’s only the best game known to the wizarding world of Harry Potter.

It’s all about scoring points and catching that pesky Golden Snitch.

The game is so popular that it has even taken hold of our human (AKA, “Muggle”) universe. There are over 150 registered teams nationwide, according to US Quidditch (USQ), the national governing body for the sport.

“Membership in USQ is open to teams and individuals in any age group in the United States,” reads the USQ page.

What is Quidditch, exactly? It’s easy to follow once you know the rules.

“Quidditch is a mixed gender contact sport with a unique mix of elements from rugby, dodgeball, and tag,” USQ states.

Quidditch involves three types of balls: the Golden Snitch, a quaffle (volleyball, worth 10 points) and bludgers (used to hit opponents).

A team is made up of one seeker who tries to catch the Golden Snitch, a keeper who blocks quaffles from getting through their team’s hoop, three chasers who handle the quaffle and two beaters who handle bludgers.

If a seeker catches the Golden Snitch, this ends the game. (Note: in the Harry Potter version, the Golden Snitch is worth 150 points. In the USQ version — or “Muggle Quidditch” — it’s worth 30.)

Here’s a handy screenshot from the USQ rules page: 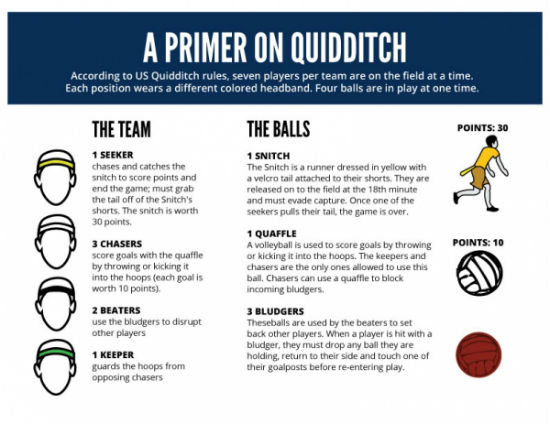 You can find a breakdown of official Quidditch rules on the USQ website.

Per the Harry Potter Fandom page, Quidditch is defined as “a wizarding sport played on broomsticks. It is the most popular game and most well-known game among wizards and witches, and, according to Rubeus Hagrid, the equivalent to Muggles’ passion for football.”

“The object of the game is to score more points than your opponents. Each goal is worth ten points and catching the Golden Snitch is worth one-hundred and fifty points,” the page continues. “The game ends when the Snitch is caught or an agreement is reached between the captains of both teams. Some games can go on for many days if the Snitch is not caught.”

What is Quidditch? J.K. Rowling drops a major bombshell

Rowling recently responded to a fan who tweeted of the game, “the scoring system of quidditch makes zero sense.”

“There’s glamour in chasing an elusive lucky break, but teamwork and persistence can still win the day,” she wrote. “Everyone’s vulnerable to blows of fate and obstructive people, and success means rising above them. Quidditch is the human condition. You’re welcome.”

It makes total sense. There’s glamour in chasing an elusive lucky break, but teamwork and persistence can still win the day. Everyone’s vulnerable to blows of fate and obstructive people, and success means rising above them. Quidditch is the human condition. You’re welcome. pic.twitter.com/0VYCgo13xh

Fans were stunned at this revelation. The human condition? Come on now.

What is Quidditch? The human condition, of course! Twitter responds

Fans seemed torn over Rowling’s tweet, and some still had so many questions. Read a handful of these responses below:

I still dont like the scoring system. If a team is down by over 150 points they have 0 incentive to go for the snitch, as they would lose if they caught it.

If, in the Quidditch World Cup Final, the Snitch is caught and the score becomes tied, what happens? Penalty shots? Spell casting? Mascots fight?

Nahhhhh I’m sorry. Trust me I love Harry Potter, but Quidditch is a broken sport. It’d be much better if there were no seekers.

Quidditch is the greatest metaphor for life there is. Especially in the U.S. right now. I feel strangely uplifted after reading that. Thanks @jk_rowling !

“We agree with J.K. Rowling that sports provide incredible opportunities to bring people together,” Sarah Woolsey, Executive Director of US Quidditch, tells Metro. “Inclusivity and community are part of our core values. Even as our sport has grown into its own, both Rowling’s fictional game and our own version uphold the fundamental values of athletics — teamwork, persistence, sportsmanship and competition.”