What is Velvet Buzzsaw really about? Writer and director Dan Gilroy talks us through it - Metro US
Movies

What is Velvet Buzzsaw really about? Writer and director Dan Gilroy talks us through it

Sure it has the gore, set pieces and frights that define the genre, but its writer and director Dan Gilroy insists it is really a “satirical thriller” that is set in an museum, a place that he has always found enticing.

“I was in a contemporary museum one night near closing with all this freaky weird art and I just thought this would be a cool place to write a thriller,” Gilroy tells Metro. “Then it clicked.”

What is Velvet Buzzsaw about?

Gilroy insists that his main duty with Velvet Buzzsaw, which revolves around the paintings of a recently deceased unknown artist haunting and murdering the higher-ups in the art world, was to make it entertaining.

But he also admits that there’s plenty of subtext bubbling underneath the film, especially when it comes to the battle of art and commerce, as he is a strong advocate that art is more than a commodity and that artists invest their soul in their work.

“The quality of the work isn’t judged by the number of views or amount paid or clicks. Success doesn’t diminish your work but it doesn’t define it. I wish any artist all the commercial success in the world. But this over-commoditization of art, this idea of buying art as an investment, locking it all away so no one can see it just to increase value, the idea of looking at something and saying, ‘Oh this made $80 million, this must be important.’ I hope people get away from that concept.”

“I understand artists want their art to be shown. They want it to be big. But any artists out there struggling, never lose sight of you and what you learned from it and never lose sight that even if only a small amount of people see it, it is still highly relevant. Beauty is its own reason for being, and it’s something to be quantified.”

Gilroy saw Velvet Buzzsaw as the perfect opportunity to marry these ideas together. But he was just as intent on making sure that the film was laced with a humor and satirical edge that kept it from being dry.

“People overlook humor in the form of satire or camp. I thought it would be interesting to mix satire with thriller.”

There was one more major film that Gilroy used as a constant reference point in these pursuits.

“American Psycho. It’s so beautiful what’s done in that film. It’s a mixed genre film and you’re laughing, you’re scared, you’re thinking. I thought, ‘Wow. This is really the benchmark that I want to try to hit here.’ That’s a polarizing film and that’s fine. But the people who love that film, love that film and I do love that film.” 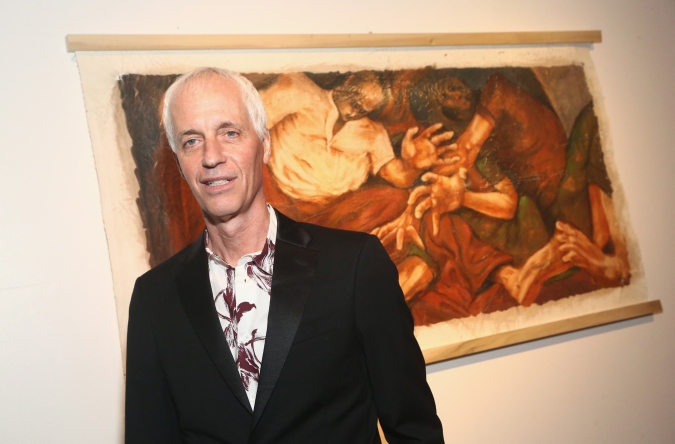 Gilroy also had the talents of Jake Gyllenhaal, who he previously collaborated with on Nightcrawler, to elevate and aid him. But what is it that Gilroy finds so exciting about working with the Academy Award nominated actor?

“Jake is fearless and wants things to challenge him. By the time I started creating the character I knew he would be challenging. That was organic to this story. Hopefully Jake has a new take on something you haven’t seen before. I knew that Jake was going to dig his teeth into it, because Jake wants to try everything, to see where it goes, and so that’s really a defining quality to our relationship.”

Velvet Buzzsaw is released on Netflix on February 1.