When does Scandal return from winter break? - Metro US
Television

When does Scandal return from winter break? It’s only a couple weeks since the Scandal season 7 midseason finale aired, but you already have the itch. Is Kerry Washington thinking about you and your Thursday night ritual somewhere out there, too? Maybe the better question is: When does Scandal return from winter break?

Scandal fans are in the worst situation right now: They’re wishing for Scandal season 7 episode 8 to get here, ASAP, while realizing that the faster it arrives, the faster the entire addictive series is over. For good this time. While we can’t help with that latter issue — other than keeping our fingers crossed that a streaming service will pick up all seven seasons so you can re-watch everything when you’re missing Olivia and the gang — we can fill you in about the former.

But first, where did the Scandal midseason finale leave things?

After a pretty ho-hum reveal that Rowan (Joe Morton) was the person who kidnapped Quinn Perkins (Katie Lowes) on her way to the wedding, the pace started to pick up. What does Rowan want, exactly, with the nine-months-pregnant Quinn? Well, nothing. He’s just using her as a bargaining chip with Olivia in order to get his dinosaur bones back.

Olivia doesn’t take the threat seriously, despite warnings from Jake (Scott Foley) to not underestimate her father. Her mother, Maya (Khandi Alexander), stands in opposition to her father — as is a show regularity by now. 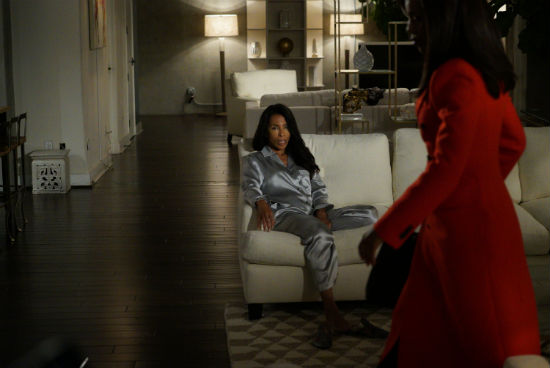 Maya has a point, though. The astute mom calls out Olivia for secretly hoping Rowan would kill Quinn and, in so doing, make all her problems magically disappear. Jake’s advice? Killing Rowan is the only way to go.

Who does Olivia listen to? Jake, naturally — or, kind of. Olivia thinks she can at least trick her father into believing that she’s going to have him killed, a notion that seems to backfire. Rowan assumes she’ll have Quinn picked off, and when Olivia corrects him, he marches off to dispatch her himself. Then comes the cliffhanger: We see Rowan fire a shot. Quinn screams. Rowan fires yet another shot, and there’s silence. Olivia’s father then returns to her, asking if she wants to see the body. 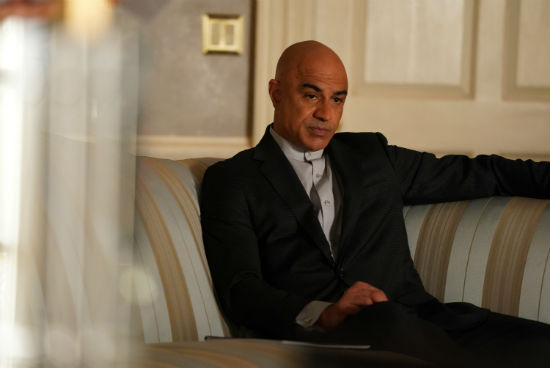 Oh, yeah, and there’s something else going on Olivia’s eventually going to have to deal with. She managed to keep cool externally in this episode wrap-up with her father, but her secretary Lucy (Caroline Day) is up to something. Lucy seems willing to rat out Olivia when she meets with Curtis Pryce (Jay Hernandez) about President Rashad’s assassination, claiming she has information.

In the midseason finale twist that no one saw coming, Lucy then kills Pryce and calls Jake to say, simply, “It’s done.” And we’re sure that after putting the pieces of your mind back together, the first question you thought was: when does Scandal return, again?

So, when does Scandal return from winter break?

We’re so sorry, Scandal fans, to report that you’re going to be waiting a while to see Scandal season 7 episode 8. So enjoy that champagne at New Years and try to put it out of your mind, because Scandal doesn’t return to the small screen until Thursday, January 18 at 9:00 p.m. on ABC. That’s right. So stop asking when does Scandal return for a while, and focus on your New Year’s resolutions!

But don’t worry, we’re sure the team behind Scandal will make the long wait well worth it. Between all the holiday traveling or entertaining and those scheduled reruns, it just makes more sense to hold the new episodes until everyone’s back in town and settled in to survive the blustery winter weather.