When does The Walking Dead return from winter break? - Metro US
Television

When does The Walking Dead return from winter break? Fans of the AMC hit show fall into two camps today: First, those asking who died on The Walking Dead last night because they missed the midseason finale; and, second, those who saw it and are now wondering when does The Walking Dead return?

If you missed last night’s episode — and don’t mind spoilers — click on the link in the first paragraph to get all caught up on who’s gotten the ax on the AMC tentpole. Then, read on to get the answer to the other burning question: when does The Walking Dead return?

Unfortunately, fans, you’re going to have to wait a while. And we know that’s going to tough considering where The Walking Dead midseason finale left off.

So where did The Walking Dead midseason finale leave things?

Fans of the comic books know that “All-Out War” has been coming since Negan’s introduction, but the show hadn’t really delivered on that promise, or the fan anger they incited with the season 8 premiere deaths of Glenn and Abraham. Well, if there’s only one thing last night’s The Walking Dead midseason finale gave the audience, it was all-out war.

The Walking Dead midseason finale saw all three more peaceful camps — Alexandria, Hilltop and Kingdom — under attack from the Saviors, who really shouldn’t have gotten away from Daryl, Michonne and Tara in the first place. (Though the blame is mostly on Eugene’s shoulders.)

Rick and the Scavengers are at the Sanctuary when Andrew Lincoln’s character figures out what’s going on. The Saviors are gone, whoever you blame for that, and they’ve taken Carol and Jerry with them. One group, including Negan, Dwight and Laura, have broken off to lead an attack on Alexandria. Another, lead by Gavin, is laying siege to Kingdom. And a third, because let’s not forget how many Saviors there are, intercept Maggie, Jesus and others from the Hilltop on the road. 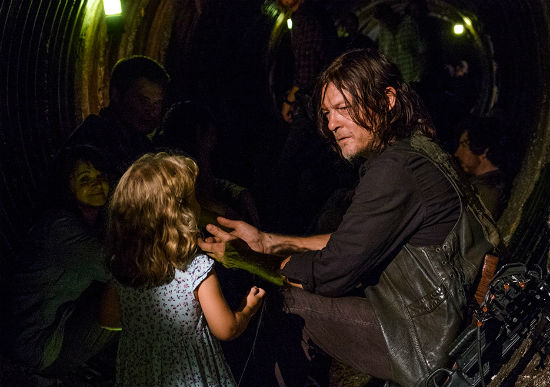 Negan had a simple demand at Alexandria: Everyone should come out and apologize to him. The person whose apology Negan deemed the weakest would have a little one-on-one chat with Lucille. (In case you don’t know or forgot, Lucille is Negan’s signature weapon: a baseball bat that’s wrapped in barbed wire with which he killed Glenn and Abraham.) Carl comes up with a plan to help save everyone: He would confront Negan, serving as a distraction while everyone else escapes. His plan sort of works. Everyone gets away, though Alexandria is lost. And, of course, he’s bitten by a walker in the process.

Dwight manages to get out of the episode unscathed. He helps lead Saviors into a trap set by Michonne, Tara, Daryl and Rosita and even guns down some of his own men. Laura discovers him and clips him, but he survives and is thanked for the trouble by almost meeting his maker at the hands of Daryl and Tara. In the end, though, he convinces them that he’ll be useful in the future, and he’s clearly just demonstrated that, so he gets out of all-out war alive.

We also got to see the fight between Rick and Negan that many have yearned for since episode one of this season. We hope you weren’t holding your breath for an end-of-the-rivalry conclusion, though, since both men get away relatively unharmed. Rick limps away with Michonne to the sewers, where he meets with Carl and learns his son’s sad fate. 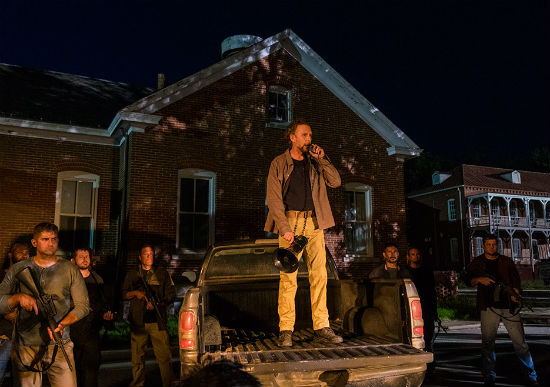 Carl’s not the only death that might be on the horizon, though. (As of the end of the episode Carl had not yet succumbed to his injury.) Ezekiel’s future is looking pretty grim, too, after he saved his Kingdomers but asked Carol to lock him in the complex with the Saviors who had promised to enslave his people.

OK, so when does The Walking Dead return and, hopefully, tie up these loose ends?

When does The Walking Dead return from winter break?

Catch the midseason premiere of The Walking Dead when the hit AMC show returns, Sunday, February 25 at 9:00 p.m. EST.