Are you ready for Pride Parade NYC 2018? Photo: Getty Images

LGBT Pride Month takes over all of June and it’s in full swing. But for many, the month leads up to the ultimate event in New York City, so when is Pride Parade NYC 2018?

Pride Month is held in June as a way to honor the Stonewall Riots, a key event in the gay rights movement that occurred on June 28, 1969. Police raided a gay bar in Greenwich Village, New York City, sparking riots and protests between law enforcement and New York City’s LGBT community. The first NYC Pride Parade — and the first gay pride parade in the United States — was on the first anniversary of those riots: June 28, 1970 on Christopher Street in Manhattan.

NYC Pride has a whole roster of events, but the parade and march are some of the biggest. Since that Stonewall anniversary event, the parade has been an annual NYC occurrence. It’s not just a celebration, according to the organizers, but also a civil rights demonstration.

What is the Pride Parade NYC 2018 theme?

NYC Pride has evolved over the years, and this year is the 49th iteration of the historic event. In that time, according to the organization, the NYC Pride Parade purpose has “broadened to include recognition of the fight against AIDS and to remember those we have lost to illness, violence and neglect.”

Pride Parade NYC 2018 has the theme  “Defiantly Different.” It’s meant to speak to the broadness of the LGBTQ community.

“This year’s theme is about showing our power, squaring our shoulders in the face of adversity, and continuing to sculpt that magnetic bond within the LGBTQ+ community and our allies,” said David Studinski, NYC Pride Co-Chair, in a statement.  “The corresponding creative showcases a wide selection of defiantly different community members —from performance artists to mental health advocates. We are standing defiantly — defiantly different and defiantly as one.” 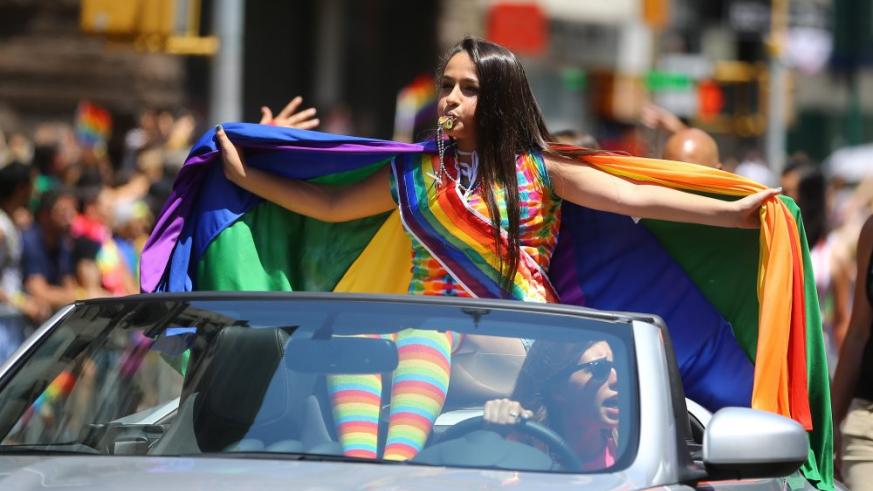 Pride Parade NYC by the numbers

Last year was one of the largest NYC Pride Parades in history, according to the organization. There were more than 450 unique marching contingents, representing a variety of nonprofits, community organizations, corporate partners, small businesses, political candidates and activists.

More than 110 NYC  Pride Parade floats made their way down Fifth Avenue in 2017 and a whopping 40,000 people participated in the march.