When will Adam McKay work with Will Ferrell again? What is Adam McKay’s next film? Here is what he told us - Metro US
Movies

When will Adam McKay work with Will Ferrell again? What is Adam McKay’s next film? Here is what he told us

Adam McKay wants to make a film that tackles global warming, as he believes that the impending crisis, that so many people are trying to dismiss and ignore, will alter the world much sooner rather than later.

“I’m kind of kicking around ideas. It is always about which way the wind breaks and where the world is headed. I have a sneaking suspicion that this global warming is really about to change everything,” McKay tells Metro.  “I have three ideas that I am kicking around on that. But I am waiting to see what is happening.”

What will Adam McKay write and direct next?

“It is clearly ratcheting up every single day. People are just now getting to understand how massive this is. The change will happen fast. You know, this time next year it could be like a World War 2 footing, where there is rationing and all lights go out at 5pm, malls close at night, all gas cars have their engines removed.”

“I’m not saying that will definitely happen next year. I’m just saying that at some point that flip is going to happen. This is no joke. This is happening. The math and science is clear. I don’t know how to respond to that as a filmmaker, but I’ll try.”

This has increased the urgency of the film, especially as McKay believes his idea could become dated rather quickly.

“I could make a whole movie that is an imagination of where the world is 20 years from now, in fact one of the ideas I have revolves around that, and then the movie comes out and we’re already at that point. I want to play centerfield on it and see the way it pans out.”

McKay’s take on global warming could even see him re-team with his Anchorman, Step Brothers and Tallegada Nights co-writer and star Will Ferrell.

“Will and I are always kicking around ideas, too. Who knows? That could maybe be the move. Maybe what the world needs is a big comedy that brushes up against these topics. Personally, I would like to see it.”

First and foremost in McKay’s mind, though, is Bad Blood, which will see McKay direct Jennifer Lawrence, who will star as Elizabeth Holmes, the founder of blood testing company Theranos.

“I am working on Bad Blood project about Elizabeth Holmes that Vanessa Taylor, the great screenwriter, is writing for us. That’s really interesting. That probably will get cooking in the fall, we’ll look at filming then, maybe a year from now. I don’t know entirely. It also depends on Jennifer Lawrence’s schedule.”

“I haven’t seen the scrip yet. It is going to be a good one. It is another fascinating story, I love that it is this $10 billion company and at the center of it there’s absolutely nothing.” 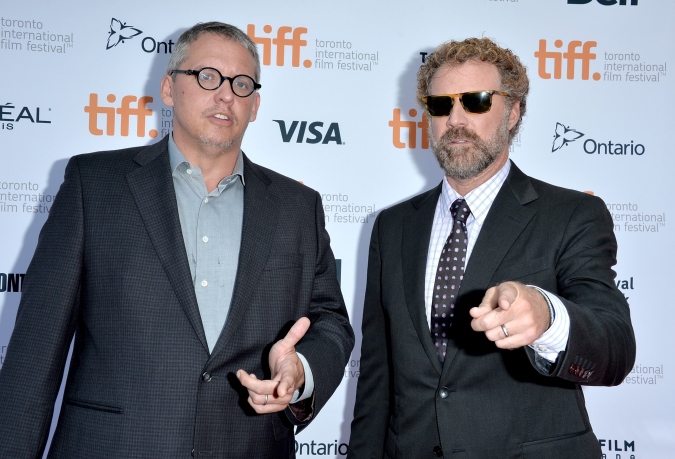 As you could have probably guessed, the list of reasons why Adam McKay wanted to work with Jennifer Lawrence was endless.

“She’s awesome. What I like about her is that first and foremost is she a great actress. But what I also like is that there is this playfulness underneath her."

"She is very collaborative, very curious, very curious about what is going on in politics, finance, she is such a veracious reader. She is a great combination of fiery, smart, talented and playful. I think she is perfect for that role and we’ll have a great time making it.”