Where see the famous Mandarin duck in NYC beyond Central Park The Central Park Mandarin duck has made headlines since mysteriously appearing in October, but New York City zoos have had resident Mandarin ducks since 2011.
Julie Larsen Maher, Wildlife Conservation Society

Like any celebrity, the Central Park Mandarin duck can be elusive. Since arriving in October, the bird also known simply as “hot duck” has turned New Yorkers into thirsty paparazzi who spend their weekends looking for him in the park — but doesn’t always make an appearance.

The Mandarin duck likes to hang out at the Central Pond at the southeast corner of the park at 60th Street; just follow the crowds and Manhattan Bird Alert for updates. But because the hot duck is a free bird, he’s been known to get away from it all on the Hudson River and New Jersey.

It’s also getting a bit cold for birdwatching just for the ‘gram (but don’t worry, the climate in the Mandarin duck’s homeland of East Asia is similar to the Northeastern United States). Luckily, there are three other places in New York City where you’re guaranteed to see a Mandarin duck. 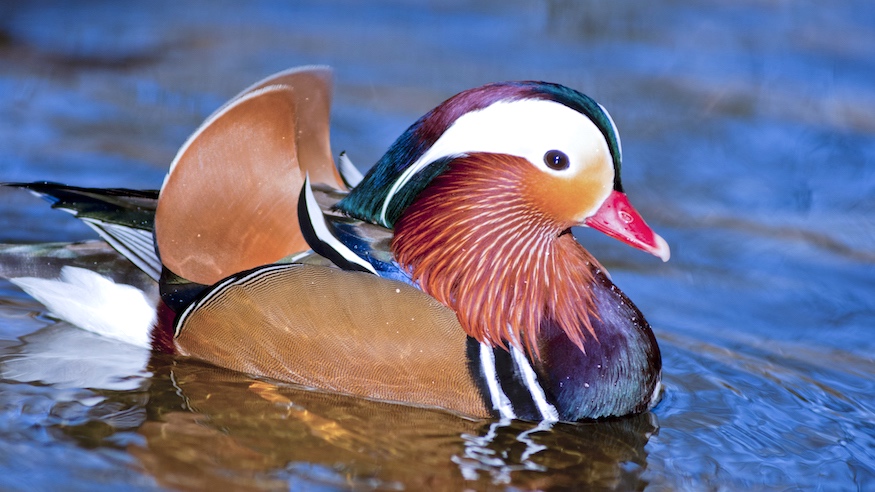 Where to see a Mandarin duck in NYC

While there’s been a lot of speculation about how the Mandarin duck ended up in Central Park, officials with the Wildlife Conservation Society say it’s “really not much of a mystery.”

The Mandarin duck, or Aix galericulata if you’re fancy, is a popular breed among rich eccentrics who have their own ponds. Which means the Central Park Mandarin duck, which has a band around its right leg, most likely escaped or was released by his owner.

Where he definitely didn’t come from is one of the city’s four zoos and the New York Aquarium, which are run by the WCS. But you can certainly come by the Bronx Zoo, Central Park Zoo and Prospect Park Zoo for a guaranteed Mandarin duck sighting.

The Bronx Zoo also has a bachelor male Mandarin duck living in JungleWorld, an indoor habitat that replicates the rainforest with species from across Asia.

Three male and three female Mandarin ducks have called the Prospect Park Zoo home since 2011, where they also serve as ambassadors in the zoo’s educational programs.

The Central Park Zoo has a waterfowl breeding program, which includes Mandarin ducks. You can find them in the Tropic Zone exhibit as well as the Tisch Children’s Zoo, and meet another hot duck in the process: The zoo hatched its first-ever harlequin duck this summer. Just look at this stunner:

Want to help all birds in New York City? Within the five boroughs, the Wild Bird Fund is the only organization that rehabilitates injured birds. The National Audubon Society also works to protect birds in the city and beyond — check out the dozens of bird murals they’re commissioning by local artists in Harlem, home of the organization’s namesake ornithologist John James Audubon.