Where to Watch the Super Bowl in NYC: The 2019 Party Guide - Metro US
New York

Where to Watch the Super Bowl in NYC: The 2019 Party Guide

The biggest football game of 2019 will be a grudgematch for the ages, so you’ll want to pick the right spot to watch the Super Bowl in NYC. Officially known as Super Bowl LIII (that’s Super Bowl 53 for the non-Romans), the New England Patriots will face the Los Angeles Rams, who just moved to a sunnier zip code from St. Louis is 2016.

The two teams faced each other in Super Bowl 36 in 2002, when the Patriots — led by quarterback Tom Brady and coach Bill Belichick, as they will be again this year — eked out a win with a last-second field goal. It was the Patriots’ first-ever Super Bowl victory, a feat they’ve repeated four times since then including 2018. It was also the last time the Rams were in the Super Bowl until this year.

It all goes down Feb. 3 starting at 6:30 p.m. at the Mercedes-Benz Stadium in Atlanta. For the rest of us, here’s our 2019 party guide to the Super Bowl in NYC. 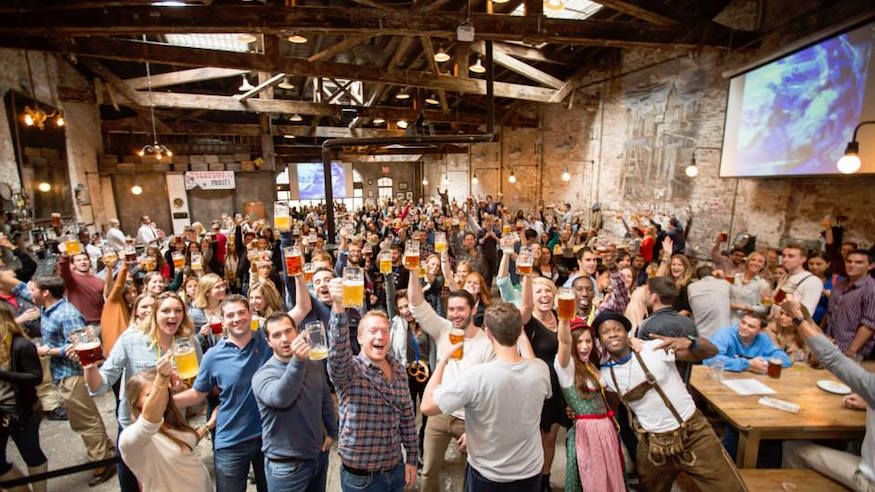 Where to Watch the Super Bowl in NYC

With the aura of a decommissioned racetrack, Houston Hall will be a lively spot for football fans. Starting at 6 p.m. through the end of the game, the beer open bar includes every brew on tap while the game plays on 12-foot screens. 222 W. Houston St., West Village, eventbrite.com

Head north to one of our favorite beer gardens, Bierstrasse in Harlem, where $30 gets you an open bar of beer, wine and well drinks from 5:30-7:30 p.m. Watch the game in their heated garden with four large projectors plus four TVs. 2346 12th Ave., eventbrite.com

Tables at Bohemian Hall and Beer Garden are first come, first served, with additional tables added in the main hall. The game will be shown on a large TV in addition to eight screens inside the restaurant, with specials starting an hour before kickoff: 50 cent wings, $4 wieners, $8 nachos, $4 mugs of beer, $14 pitchers and $5 house wine. 2919 24th Ave., Queens, bohemianhall.com

It might be too cold to grill outdoors, but that’s not stopping The Cannibal from throwing a whole roast pig feast in honor of Super Bowl LIII. Your $75 ticket also comes with unlimited draft beer and snacks like eggplant parm fritters, deviled eggs, pretzel balls with beer cheese, potato salad and tons more. Watch the game on three large TVs and a projection screen. 111 E. 29th St., eventbrite.com

The ultimate spot for Patriots fans will be Professor Thom’s — they haven’t released their game day specials, but if you’re a New England fan, this is where you want to be. 219 Second Ave., professorthoms.com 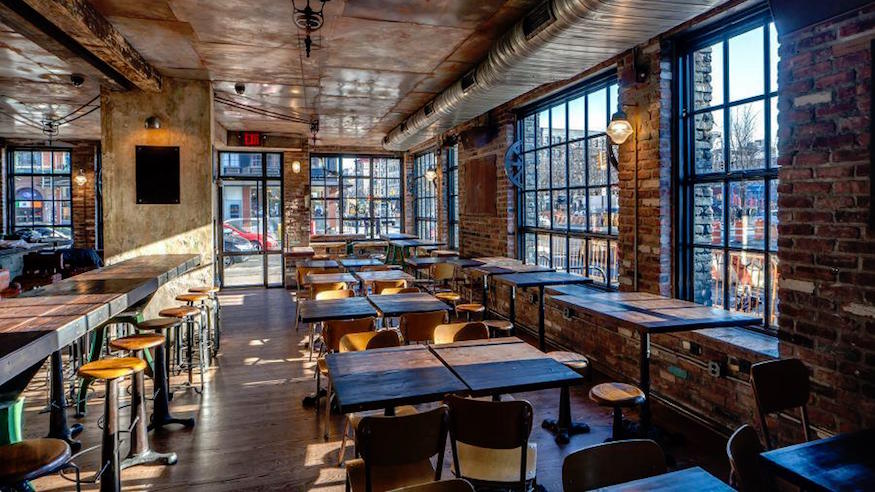 In honor of Super Bowl 53, drink unlimited beer or wine throughout the game for $53 at East Village gastropub Boulton & Watt. The game will be shown on seven TVs throughout the bar, and a selection of game-day specials will also be available a la carte. Reserve by calling 646-490-6004. 5 Ave. A, boultonandwattnyc.com

Watch the game with the barbecue you can’t cook in this weather at Virgil’s Real BBQ, which has the largest projection screen in Times Square and numerous TVs throughout the restaurant. The Pigskin Platter ($59.95) is enough for two with spare ribs, brisket, pulled pork, chicken, cornbread and two sides, plus five Miller Lite beers. The bar will also offer specials like $15 Coors Light pitchers and $6 shots. 152 W. 44th St., virgilsbbq.com

Gowanus bar and taqueria Parklife is setting up two screens in its dining room for a free Super Bowl watch party. RSVP at Eventbrite and arrive early to grab a seat — doors open at 5 p.m. 636 Degraw St., Brooklyn, parklifebk.com

Nashville-inspired restaurant and bar Printers Alley will be showing the Super Bowl on all of its 21 TVs. Instead of its usual game-day specials, $70 gets you all in with an open bar and unlimited wings. 215 W. 40th St., Times Square, printersalleynyc.com

Pick your team and get a free shot when they score at Bar Nine. They’ll be showing the game on a large projection screen (plus 10 TVs) with giveaways all night from Fireball Whiskey and Modelo Beer. Your $45 includes an open bar during the game (beer, wine, well drinks) and complimentary buffet during halftime. 807 Ninth Ave., Hell’s Kitchen, bar9ny.com

Spend your Super Sunday at Sweetwater Social, where a $125 includes premium open bar starting an hour before kickoff, a feast of carving stations (prime rib, pork, turkey) plus wings, nachos, sliders and more. Seats are guaranteed, an an 8-foot projector screen plus five TVs mean you won’t miss a moment. 643 Broadway, drinksweetwater.com 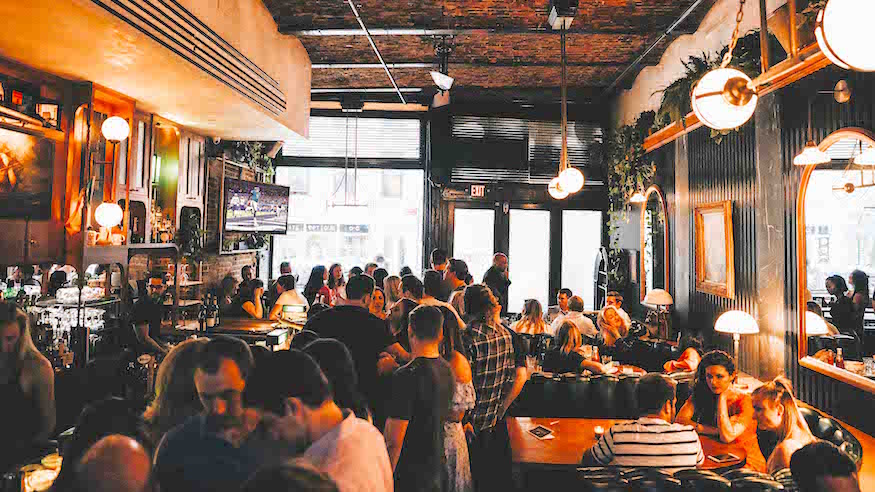 West Village whiskey bar The Spaniard will be showing the game on two TVs and a 5.5-foot projector screen. Slide into a booth or gather your crew to book the coveted corner bar with a dedicated bartender and server. Order a la carte or family-style party platters of charbroiled oysters, buffalo duck wings and more. A portion of proceeds from the night benefit Charity:Water. 190 W. Fourth St., thespaniardnyc.com

There’s no cover to watch the game at Brooklyn Bowl in Williamsburg, where all 14 TVs will be showing the game with sound. There’s the option of a $40 all-you-can-eat Super Bowl Buffet starting at 5 p.m. through halftime including wings, mac and cheese balls and pulled pork with cornbread, plus $6 bottle/$22 pitcher of Coney Island Pilsner or Brooklyn Lager all night. 61 Wythe Ave., Brooklyn, brooklynbowl.com

Hit up the Sanctuary Hotel’s upscale lounge Tender for Super Bowl LIII, with nine TVs and three projector screens and a Touchdown Package for $50pp that gets you a pitcher of beer, appetizer platter and best of all, guaranteed seating (note: you’ll need to find a +1 since they’re two-person tables). 130 W. 47th St., Theater District, tendernyc.com

Sports lounge Slate will show the game on a 20-foot HD screen along with the 40 TVs spread across its two floors. Entry is $5, table packages start at $200, plus specials like $5 Bud Lights and $6 shots. Arrive early to check out the revamped game room downstairs. 54 W. 21st St., Flatiron, slate-ny.com

Haven Rooftop will have a $55pp Touchdown Package guaranteeing seats as well a pitcher of beer and an appetizer platter. The enclosed and heated lounge will show the game on eight 55-inch TVs. 132 W. 47th St., havenrooftop.com

The spacious back room of Humboldt & Jackson hosts sports watch parties on their 120-inch screen all the time, but for the Super Bowl they’re sweetening the deal. The $20 ticket gets you all-you-can-eat wings and guarantees you a seat. 434 Humboldt St., Brooklyn, eventbrite.com

Kick it at Caribbean oasis Wicked Willy’s, where the game will be screened on a massive 20-foot projector with surround sound, with a three-hour premium open bar (well drinks, beer, wine, select liquors) plus unlimited wings and guaranteed seats for $69. Stick around for karaoke after the game. 149 Bleecker St., Greenwich Village, eventbrite.com 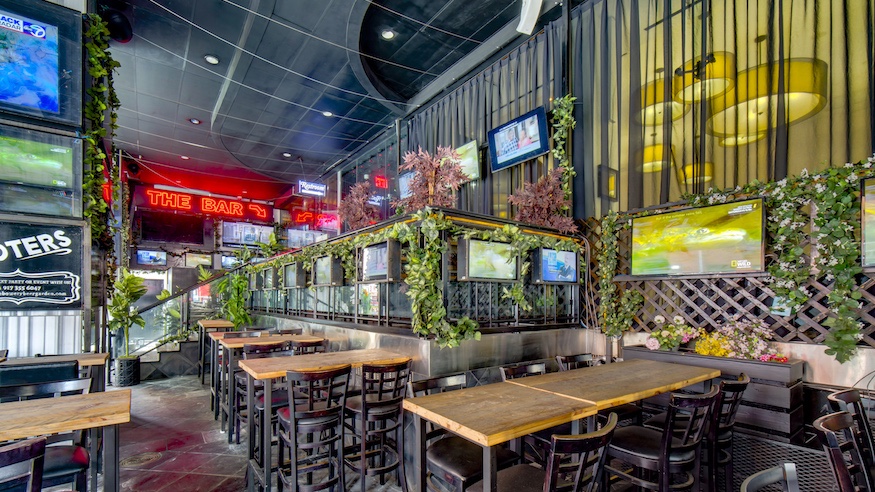 Sports hotspot the Bowery Beer Garden has more than 50 TVs with tons of seating and 40 brews on tap and bottles. Pregame with a one-hour open bar from 5:30-6:30 p.m. (beer, wine, champagne), with prizes every quarter and specials. $20 cover, 93 Bowery, eventbrite.com

At Flatiron Hall, every brew on tap is included in its open beer bar starting at 6 p.m. until the end of the game. Watch the action on a projector screen or TVs throughout the party hall in the cellar, with plenty of communal tables. 38 W. 26th St., eventbrite.com

An artsy type who likes football? House of Yes has the party for you with the Superb Owl Experience, which they admit is “an elaborate excuse for us to produce one of the most incredibly immersive and absurd halftime shows anyone has ever seen.” The game will be screened live, with drink specials, hot wings, burgers and other game-day food, and a free dance party afterward. $20, 2 Wyckoff Ave., Bushwick, eventbrite.com

Head upstairs at the Financial District’s barbecue spot Route 66 Smokehouse for an unlimited buffet of tailgating favorites and open bar (beer, wine, select liquor) until halftime, plus a whole pig roast. In addition to several TVs, the game will be screened on a large projector screen, though football purists should note the are shares space with games including foosball, pinball, ping-pong and more. $50, 79 Pearl St., eventbrite.com

The open bar at Beer Authority New York is more than just suds. For $100, get reserved seats and a selection of drafts and domestic bottles, premium liquor and wine, plus a buffet (through halftime) of tailgate fare like mini quesadillas, bacon-wrapped hot dogs, wings and sliders. Or go buffet-only for $40. 300 W. 40th St., eventbrite.com 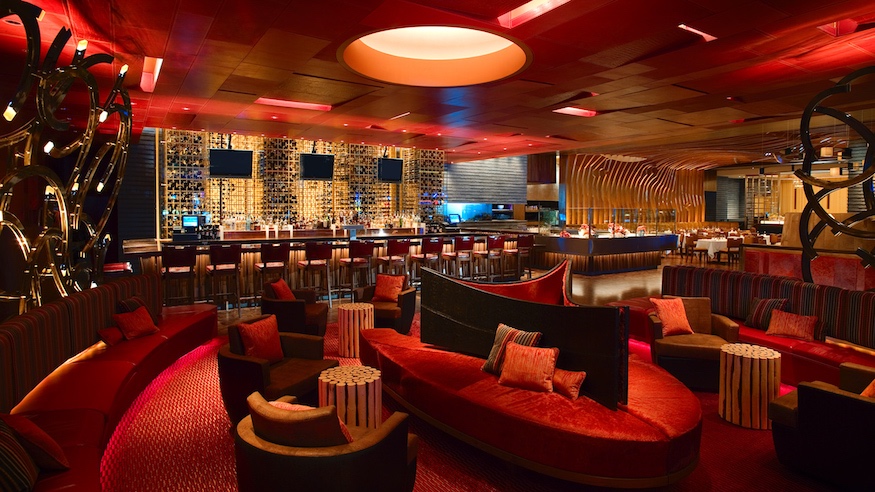 Make a weekend of it at the Borgata Hotel Casino & Spa in Atlantic City, where you’ll find game day food and drink specials throughout the property starting at 4 p.m. Angeline by Michael Symon will offer $4 domestic beers, $10 cocktails and $7 small plates; Bobby Flay Steak will offer $4 local microbrews and $7-$11 small plates. You can bet on the game at the hotel’s Race & Sports Book or on the playMGM NJ Sports app. Partied too much? Book a room starting at $99, including a $50 bar credit. 1 Borgata Way, New Jersey, theborgata.com

Chelsea newcomer The Wilson will serve up barbecue by Swingbellys and a special game day menu. Play games like corn hole on the covered outdoor patio before kickoff, then watch the game in the upstairs cocktail bar on TVs and a projector screen, with a halftime raffle for prizes like airfare and accommodations to next year’s Super Bowl (you’re on your own for getting tickets though). Your $25 ticket includes a plate of barbecue, two drinks and one raffle ticket. 132 W. 27th St., Chelsea, reserve at reservations@ingoodcompany.com

Upscale sports bar Dewey’s Pub requests you take your attire up a notch. In exchange, you’ll find deals like 2-for-1 drinks and free entry before 6 p.m., then gametime specials including a 10-person appetizer platter for $55 (or 20 people for $75), $40 beer buckets and $35 margarita/rum punch pitchers, with music by DJ Exeqtive, DJ MR AKA and DJ Jibz. 135 W. 30th St., Herald Square, deweyspub.com

The craft beer hall slowly taking over every borough Clinton Hall is offering $30 buckets of beer and $25 for 20 wings during the Super Bowl at all of its locations. The regular menu will be available as well. Five locations, clintonhallny.com

At the swanky Man Men-inspired 5th & Mad, 18 TVs and two large projector screens will keep you in the action. The $10 ticket includes your first drink; bottle service starts at $300. Specials include $1 wings and $30 buckets of domestic beers, and with two floors there’s plenty of room to spread out. 7 E. 36th St., Midtown, 5thandmad.com