Who is Erica Herman? 4 Things to know about Tiger Woods' girlfriend - Metro US
Celebrities

Who is Erica Herman? 4 Things to know about Tiger Woods’ girlfriend The 100th PGA Championship came to a close on Sunday, and Tiger Woods received second place prize. Girlfriend Erica Herman was in attendance waiting to congratulate the pro golfer.

Herman greeted Woods with a kiss — and even slipped in a few butt taps for kicks — and some fans were left stunned, unsure of who this woman was.

Watch the exchange below:

“Wow. That was fun to watch.” pic.twitter.com/VOpWIfbmNW

Despite the fact that the two have reportedly been together since last year, their relationship hasn’t made headlines as of late, and many people took to Twitter to express their confusion.

“The fact that no one really knew that [they were dating] suggests maybe he’s figured out how to keep his personal life personal …” one fan wrote.

Woods’ ex-wife, Elin Nordegren, divorced him in 2010 after he admitted to a string of infidelities with other women. Since, he’s dated stylist Kristin Smith and Olympic skier Lindsey Vonn.

Erica Herman has worked in the restaurant industry

Herman, 34, was reportedly general manager of Woods’ namesake restaurant, The Woods, which opened in 2015 in Jupiter, Florida.

She was reportedly involved in the opening of The Woods’ first pop-up restaurant, The Woods At 10, at the Genesis Open in February 2017. It offered fans a menu that included lollipop lamb chops, truffle fries and tuna tartar.

“We are bringing the TGR expertise and experience to a live event,” Herman said at the time. “It’s just a taste of our menu. This is a way of sharing what we have learned and done. It’s a great opportunity for people to see what we can do.”

At the Presidents Cup in October 2017, Herman wore a “player spouse” badge that’s reserved for golfers’ wives and girlfriends.

She’s since been spotted with Woods at other tournaments — and attended Wimbledon with him this year.

Here she is at the Open Championship in July with Woods’ children, 11-year-old Sam and 9-year-old Charlie: 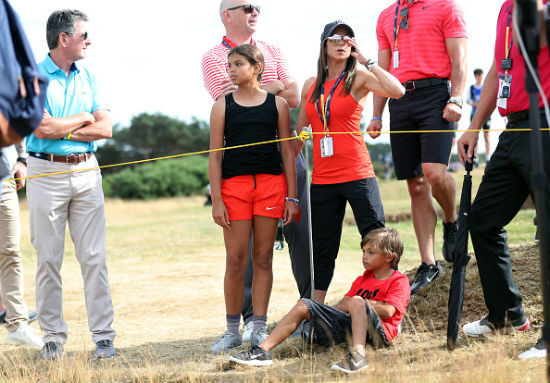 A source told Radar Online that Herman met Woods in a nightclub he used to frequent, though other outlets claim they met while she managed his restaurant.

“Erica’s been chasing Tiger around like a puppy for close to ten years,” the source told the gossip site.

It was also rumored that Woods had an affair with Herman during his relationship with Smith, whom he broke up with around August 2017. Woods reportedly denied this affair.

“Kristin suspected it, but he would always deny it by belittling Erica,” a source told Radar Online. “Kristin eventually caught them together. It was a big mess.”

Herman has reportedly banned her family from speaking to the press, and besides the occasional paparazzi photo, we haven’t seen much of her.

Woods has kept their relationship well under wraps, and neither of them have commented on the romance.

By the looks of it, though, Herman isn’t going anywhere.