Why did Rex Tillerson call Trump a 'moron'? The answer is terrifying - Metro US
Donald Trump

Why did Rex Tillerson call Trump a ‘moron’? The answer is terrifying You’ve seen the battle rage in headlines and on Twitter between President Donald Trump and Rex Tillerson. Reports that Tillerson called Trump a “moron” in a closed-door meeting with the president’s security team lead Trump to challenge the secretary of state to a battle of the brains on social media. And while that might have made you ask, “Wait, what is Donald Trump’s IQ?” You should also be asking why Rex Tillerson called Trump a moron in the first place.

That is, if you’re sure you want to know the answer.

Trump’s frequently Twitter rants may have desensitized most of the nation to seemingly random name calling — like the recent case of “Liddle’ Bob Corker (reason for the apostrophe unknown) — but we should all remind ourselves that most politicians, and humans for that matter, don’t throw around insults for no reason.

Trump wanted to increase the U.S.’s nuclear arsenal — tenfold. This stunning sentiment came at a meeting last summer attended by the nation’s top security leaders, NBC reports. Trump’s comment “came in response to a briefing slide he was shown that charted the steady reduction of U.S. nuclear weapons since the late 1960s,” three officials who were in the room told the news network. The president made it clear that he wanted “a bigger stockpile, not the bottom position on that downward-sloping curve.” 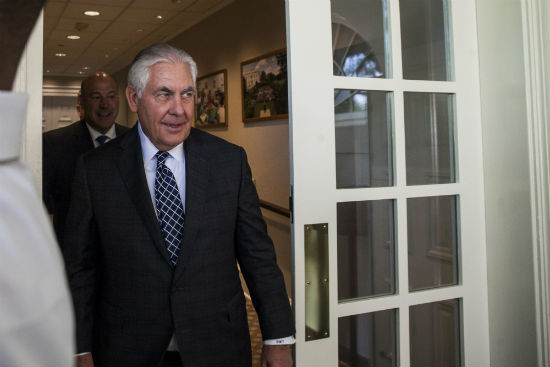 The Joint Chiefs of Staff and Secretary of State Rex Tillerson were all shocked by Trump’s reaction, the three officials explained. Despite Trump’s insistence on this build-up, the officials told NBC News that no such expansion of the nuclear arsenal was planned. After this meeting about nukes, officials who stayed behind reportedly heard the insult tweeted around the world uttered by Tillerson about Trump.

Though Tillerson has doubled down on his loyalty to Trump since the reports surfaced, calling him “smart” and claiming the president is “making America great again,” the quote lingers.

The revelation of Trump’s desire to increase America’s number of nuclear weapons comes while tension is still high between the U.S. and North Korea. Though the immediate fear that North Korean leader Kim Jong Un has his finger on the launch button has subsided, the standoff continues, and there’s no forgetting the high stakes. The country also stands to enter another confrontation on the subject of nuclear weapons, this time with Iran.

Trump held a meeting on Tuesday with national security advisors, in which the White House says they discussed “a range of options to respond to any form of North Korean aggression or, if necessary, to prevent North Korea from threatening the U.S. and its allies with nuclear weapons.”

An increase in the American nuclear arsenal, most experts agree would not only break with years of disarmament efforts but also kick off a global arms race.

Not everyone is in favor of more nukes. In July, the UN signed a treaty that 2017 Nobel Peace Prize winner International Campaign to Abolish Nuclear Weapons (ICAN) marks as “the beginning of the end for nuclear weapons.” According to the UN, “the Treaty is the first multilateral legally-binding instrument for nuclear disarmament in two decades.”