Why Giants win over Texans was so important - Metro US
Advice

Why Giants win over Texans was so important

Eli Manning and the Giants showed signs of life on Sunday against the Texans. (Photo: Getty Images)

The New York Giants pulled off a rare feat on Sunday; something they have only done four times since January 2, 2016.

A 27-22 triumph over the Houston Texans at NRG Stadium gave head coach Pat Shurmur and running back Saquon Barkley their first wins as Giants in an offensive display that was significantly different than the first two weeks of the season.

After averaging just under 290 yards of total offense in losses to the Jacksonville Jaguars and Dallas Cowboys, the Giants put up 379 yards and 27 points against a struggling Houston defense. Since Week 12 of the 2016 season, the Giants had scored 27 or more points just two times. Though they have still yet to hit the 30-point mark since 2015.

But for a team that is coming off a 3-13 season and looked destined for it again after the first two weeks of the year, baby steps are required when it comes to turning around a franchise.

While Flowers has been a weak spot within New York’s line for the past three-plus seasons, throwing Wheeler into the fire by matching him up against Texans star pass rusher J.J. Watt was a risky move.

In no means was Wheeler’s performance exception as he allowed three sacks on the afternoon, but he and the Giants offensive line gave veteran quarterback Eli Manning much more time in the pocket compared to Week 2 against the Cowboys.

With a cleaner pocket and a few extra seconds to scan the field, Manning showed that he can still sling it with the best of them, completing 25-of-29 passes for a season-high 297 yards and two touchdowns.

For the running game, Barkley also experienced an improvement in open spaces and avenues for him to exploit. The rookie rusher put together the most consistent game of his young career, averaging 4.82 yards on 17 carries while adding another 35 yards via five receptions. 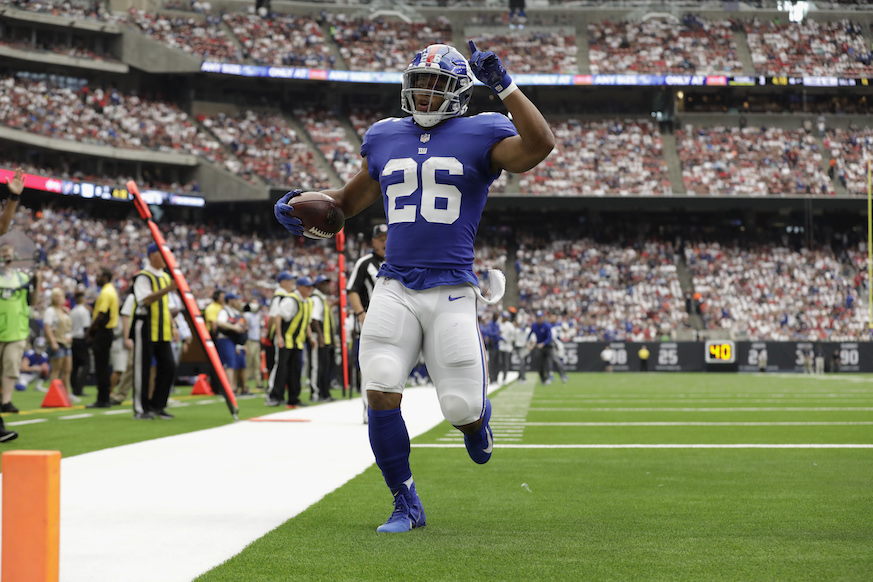 Why the Giants win over Houston was so important

The offense showing a glimpse of firepower should be a promising site to the organization, especially because of the upcoming schedule the Giants have.

New York’s next four games are coming against offensively-gifted teams that is going to put plenty of stress on a defense that has performed well over the first three weeks of the season.

Expect the Giants’ defense to let up a few more points than the meager 20.6 they’ve averaged so far.

Week 4 will see Drew Brees and the New Orleans Saints’ No. 2-ranked offense visit MetLife Stadium. The aerial-happy offense leads the league in passing yards as Brees already has four different targets with over 100 yards on the season.

The Carolina Panthers will be coming off a bye week to host the Giants in Week 5. The extra time for preparation should see quarterback Cam Newton and running back Christian McCaffrey pick up even more momentum.

McCaffrey is coming off a career-best 184-yard performance against the Cincinnati Bengals while the Panthers put up a season-high 31 points.

It doesn’t get easier as the defending Super Bowl champion Philadelphia Eagles come to town as last year’s MVP candidate Carson Wentz continues to find his footing after returning from a torn ACL and LCL before the Giants head to Atlanta to meet Matt Ryan, Julio Jones and Calvin Ridley in Week 7.

A poor performance against the Texans would have led many to believe that the Giants would be  0-7 in the blink of an eye with this schedule. But the improvements shown on Sunday in Houston suggest that the Giants might be able to steal a game or two to at least stay relevant during the early portions of the 2018 season.