Why is it so hard to make a good King Arthur film? - Metro US
Movies

Why is it so hard to make a good King Arthur film? Movies bomb all the time. Still, the death this weekend of “King Arthur: Legend of the Sword” is one of those titanic doozies that will probably rewrite how blockbusters are made. Grossing a pitiful $14.7 million against a $175 million budget — and that’s not even factoring in advertising dough — it will probably put a damper on any big movie based on an age-old source. Audiences love brands, but these days they have to be comic book movies, not decades- or centuries-old legends execs assumed still carry cultural currency. (See also: “The Lone Ranger,” last year’s underperforming “The Legend of Tarzan.”)

The failure of “King Arthur” also raises another question: Why is it so hard to make a decent “King Arthur” movie? Every decade, Hollywood tries to make a movie on the Arthurian tales, and yet they never just stick to the stories; they invariably try something creative. In fact, there are really only two big movies in history that play it straight.

The first is “Knights of the Round Table,” from all the way back in 1953, with Mel Ferrer as our goodly King and Ava Gardner as straying Guinevere. The other is John Boorman’s “Excalibur” (pictured below), made in 1981. And while the hit crams most of the story into one epic — the Sword in the Stone, Merlin, Lancelot, the search for the Holy Grail, etc. — it’s super-weird. It’s great because it’s super-weird, but even this one is far from straight-forward.

Usually, though, King Arthur movies, including “Legend of the Sword,” think outside the box. That should be a good thing; more movies ought to be creative instead of slavish. But the results tend to be beyond lackluster, all while ignoring the stories’ many goods — like a chef who tries to make a twist on an old dish and creates a dispiriting mess that only makes one long for the original. 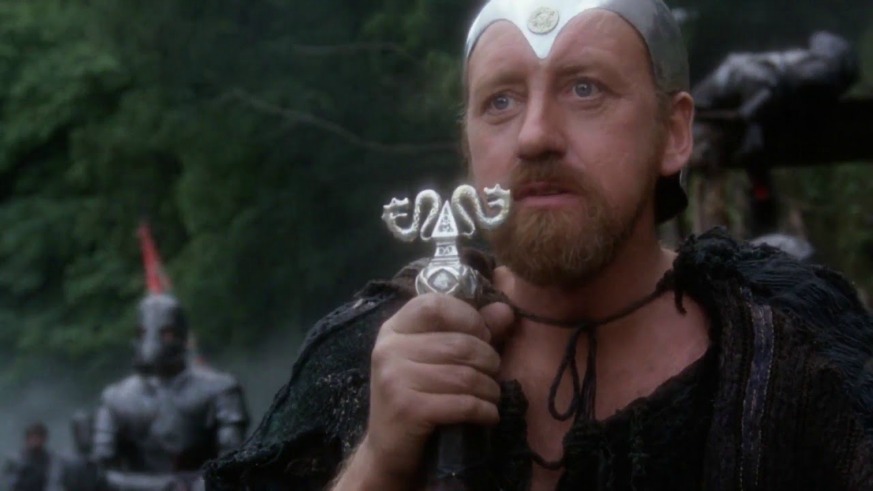 The last time Hollywood aimed for a big Arthur movie — and failed then, too — is 2004’s “King Arthur.” It was in your face about not being your grandfather’s Arthurian picture; it was a revisionist twist that tried to make a fantastical tale, filled with sorcery and wizards, realistic. But it only succeeded in making Arthur (Clive Owen) and the film around him a brooding bore. In an attempt to make the stories relevant, they wound up stripping away anything that might be fun.

Time has mostly forgotten 1995’s “First Knight,” which shifted the focus away from Arthur (Sean Connery) to adulterous Guinevere (Julia Ormond) and Lancelot (Richard Gere), all while also removing anything resembling fun. Merlin is mysteriously AWOL here, too, as he would be in the next two Hollywood Arthur films. Why the beef against one of literature’s coolest sorcerers?

There are still plenty of good Arthur movies, though they tend not to be comprehensive, focusing on one character or one story. “Camelot” turns the tales into a splashy 1967 musical. Disney’s “The Sword in the Stone” only tackles the first of four volumes in T.H. White’s massive “The Once and Future King,” when our hero was a kid. In the ’70s, French geniuses Eric Rohmer and Robert Bresson each made an excellent, arty Arthur movie apiece, with “Perceval” and the gory “Lancelot du Lac.” Maybe the weirdest sorta-Arthur movie is 1981’s “Knightriders,” in which zombie king George A. Romero cashed in on the success of “Dawn of the Dead” and made a deeply personal epic about a group of modern guy’s guys (led by Ed Harris) who recreate the Court of Camelot on motorcycles.

And then there’s arguably the greatest Arthur movie: “Monty Python and the Holy Grail.” It might be unfortunate that the finest film about the legend is a parody featuring a killer bunny and a scene in which peasants debate socialism, but at least its eternal popularity keeps the stories alive. Not even Hollywood can do that.