Why you should throw away all romaine lettuce right now Updated on December 7, 2018: Yesterday, the CDC issued another update on the outbreak of E. coli in romaine.

A notice reads as follows: “CDC continues to advise that U.S. consumers not eat and retailers and restaurants not serve or sell any romaine lettuce harvested from the Central Coastal growing regions of northern and central California. If you do not know where the romaine is from, do not eat it.”

Some romaine lettuce products now have harvest location labels, but if products are not labeled, do not buy, serve or consume them.

Since the CDC’s last notice, nine more people were reported ill. The case number totals to 52. States affected increased from 12 to 15, and hospitalizations rose to 19. The death count remains at zero.

Updated on November 27, 2018: The CDC issued an update on the ongoing investigation regarding an outbreak of E. coli in romaine.

The agency is now narrowing down its food safety alert. Consumers, retailers and restaurants should not eat or serve romaine lettuce harvested from the Central Coastal growing regions of northern and central California.

Romaine lettuce products will be labeled with a harvest location by region, the CDC says, though it could take time before the labels are available, and people should stay away from romaine lettuce that is not labeled.

“If you do not know where your romaine lettuce was harvested, do not eat it and throw it away,” the agency warns.

This safety notice still applies to all kinds of romaine including spring mix and baby romaine.

Since the CDC’s last notice on the matter, 11 more people were reported ill, bringing the case number to 43. States affected increased from 11 to 12, and hospitalizations rose to 16. The death count remains at zero.

Originally published on November 20, 2018: Ahead of Turkey Day, the CDC has announced another outbreak of E. coli in romaine.

As of Tuesday afternoon, there are 32 reported cases of infection across 11 states. Thirteen have been hospitalized, and illnesses started on dates ranging from October 8 to October 31.

According to the agency, one person developed kidney failure, but there have been no reported deaths at this time.

“CDC is advising that U.S. consumers not eat any romaine lettuce, and retailers and restaurants not serve or sell any, until we learn more about the outbreak,” reads a food safety alert. “This investigation is ongoing and the advice will be updated as more information is available.”

The CDC warns against eating any type of romaine lettuce while they proceed with an investigation.

This goes for the following, per the CDC: “whole heads of romaine, hearts of romaine, and bags and boxes of precut lettuce and salad mixes that contain romaine, including baby romaine, spring mix, and Caesar salad.”

If you have these products in your home, discard of them immediately.

Outbreak Alert: Do not eat any romaine lettuce, including whole heads and hearts, chopped, organic and salad mixes with romaine until we learn more. If you don’t know if it’s romaine or can’t confirm the source, don’t eat it. https://t.co/NrFOIxG8hx pic.twitter.com/FuzkHv4bd3

If you feel symptoms such as severe stomach cramps, vomiting or diarrhea, contact your health care provider. 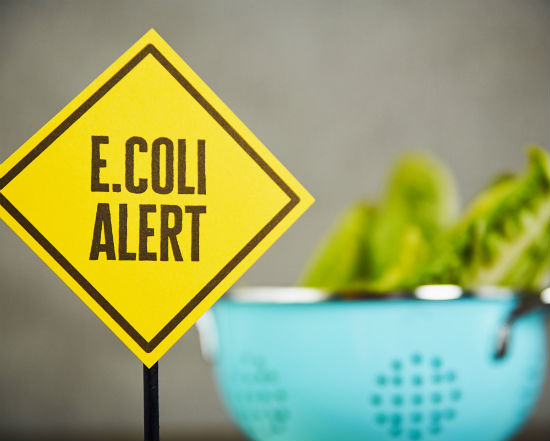 The CDC announced an outbreak of E. coli in romaine during late spring 2018 that resulted in 210 reported illnesses and five deaths. The outbreak appeared over as of June 28, 2018, and there was no reported recall of any kind.

However, ill people in the current outbreak are infected with E. coli O157:H7 that had the same DNA fingerprint as E. coli found in illnesses from a fall 2017 outbreak. Those cases were linked to “leafy greens in the United States and to romaine lettuce in Canada,” the representative tells Metro.

This is an ongoing investigation. Bottom line? When in doubt, throw it all out.