Wildlife expert Casey Anderson has seen it all. With his Nat Geo Wild series Expedition Wild and America the Wild with Casey Anderson, the rugged and charming Anderson had made a reputation for immersing himself within the wilderness to unearth the truth about some of nature’s best kept secrets. We caught up with Anderson to talk about his brand new show Monster Encounters on the Travel Channel to see if he can explain the phenomenon behind the man’s fear of some of nature’s “monsters” and what actually scares him in life.

Casey Anderson takes us inside his Monster Encounters 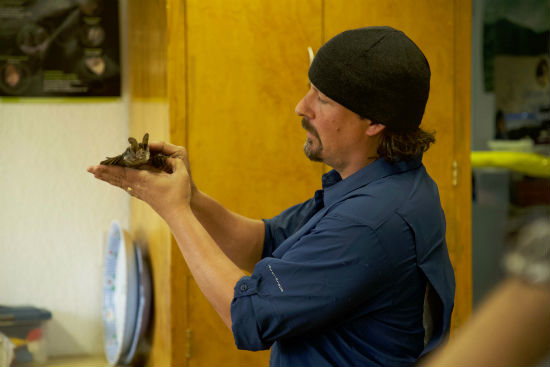 Do you think that people’s original concepts of “monsters” throughout history had to deal with being surprised or startled by regular animals out in the wild? Like a bunny that had cast a large shadow or something?

Casey Anderson: I’m kind of impressed that you’ve gone so deep into this! But I also think it goes a lot deeper than that. I think the human animal — at some point — they even say you can get arachnophobia, the fear of a spider, even if you have never seen one before. But there was a time when humans were eaten by saber toothed tigers and spiders would bite them and they would die because there were no hospitals. They say that even genetically — which sounds crazy — that people have this gene where you can inherit the fear of spiders. So it goes back to that behavioural conditioning of there was one time where we walked on common ground with predators who could look at us like food. So that’s the base of it. Then you take that fear or that innate flight or flight response that you would have of a ‘monster’ or something that could easily kill you and you evolve into the human we are today. People back then had such an understanding animals. They knew where not to go. They knew what each animal could do. Now we have this unknown. We don’t know. We still have some sort of a fear where our brains sensationalize and anything is a spider. We don’t know what it is and if we don’t know what it is we are going to be afraid of it. So there’s that aspect of it.

Even today, once and a while a shark will kill somebody or a grizzly bear will maul somebody. It’s very rare and it’s not what these animals do. But the headlines are all you hear about. You don’t hear about great white sharks having fun today and eating seals. You hear about the surfer who got his arm ripped off or a grizzly bear who killed a camper. So, it’s that broad stroke of the brush. That’s what grizzly bears do. That’s what sharks do. Couple that with the unknown of what these animals really are and that deep seeded fight or flight response. Now you’ve got this monster! The brain and imagination just go crazy. The bottom line is that it comes down to one thing and it’s that most people who consider animals as monsters don’t even know what that animal is or anything about it.

Was there a particular encounter with a scary animal in the wild that inspired your show,  Monster Encounters?

Casey Anderson: That’s definitely part of the puzzle. I’ve been running out with animals out in the wild for my whole life. I think it’s probably the other way around because I’ve gotten to know animals and spend time filming them and observing them in the wild. Realizing what the people I know, and what I hear from people, is their perception of the animal is quite wrong. So I realized these people are judging the book by the cover. I’ve opened this book and read it. I understand these animals now. So it’s time to take my skill set of what I’ve been doing with my life to tell their stories and be their voice for them. Shine a light on the “monster”… I think that’s how it came about.

But at the same time, I don’t want to become complacent because there has been times when I’ve been out in the wild and a there are those situations when a desperate male grizzly bear who is in the last years of his life and needs to eat and can’t chase down elk calves and can’t dig like he used to. He sees me standing there and says ‘there’s 200 pounds of protein who can’t run very fast. I’m going to go over there to kill him and eat him.’ This is a very real thing that happened to me and he tried. That’s a real life monster that does actually exist. But a very rare situation. In fact a situation that, more often than not, we as humans have forced these animals to go into that desperation mode by taking away their habitat and there food sources and in turn backing them into a corner.

Casey Anderson: They’re in a survival moment. When those ‘monster’ moments happen, it’s almost always because they’re in desperation and survival mode because we’ve taken everything away from them. Going out there and trying to cure these myths and shining a light on these monsters and coming face to face with them to try and find their truth, every time I would walk away from the location the ‘monster’ was us in some aspect. I always kind of knew that. But it took going out there and tracking these monsters and elusive animals down and me living in the world for a little while and getting to know them to really hammer it home. I think that’s the one great thing about this show, you go into it looking for a monster and you come out with a real message. But not in a way saying ‘hey, you should go out and pet grizzly bears and high-five lions in Africa.’ It’s not a responsible message. It’s more that these guys can do this and will do this but we’re causing that to happen. We need to change.  We’ve forced them to adapt to the point where they can’t adapt anymore. Now it’s our turn. Then we can coexist with these animals.

I guess you could equate some of these big game hunters — I won’t name names — are actually more of the “monsters” than the animals they believe are monsters?

Casey Anderson: That’s a good point. That’s the other thing that humans don’t really do well is understand that these animals that we live with on the planet with are as much of individuals as we are. A grizzly bear is not just a grizzly bear. They all have personalities and have grown up and experienced life differently and become very distinct personalities because of it. That’s the case with all animals. Like you said, there’s some bad eggs out there. Even in the animal world. They’re the ones you hear about and are in the headlines. They’re the ones that every one bases their perceptions on.

Outside of all of these “Monster Encounters” — what terrifies you the most in life?

Casey Anderson: That’s easy. The thing that terrifies me the most is getting a real job! I have the greatest job in the world. I’m not complacent. I’m not a fool out there. My friends say I’m the most over prepared risk taker ever. And I am! If I went out there and I got hurt, everything I say and stand for goes away. So I take that to heart. It’s scary out there but if you understand it and act responsible it can be predictable. That’s my job! So, getting a real job? I wouldn’t know what to do, man!

You can see Casey Anderson on his new show Monster Enounters premiering tonight and airing every Tuesday night at 10pm.