Your guide to the best beaches in New York City

Technically, you can lounge on the sand anytime — Rockaway Beach is even something of a nighttime destination. But swimming is only allowed on the city’s 14 miles of beaches when lifeguards are on duty from 10 a.m. to 6 p.m.

The beaches will remain open through Labor Day, Sept. 3. That gives you a little over three months to make the most of every warm, sunny weekend on New York City’s best beaches. 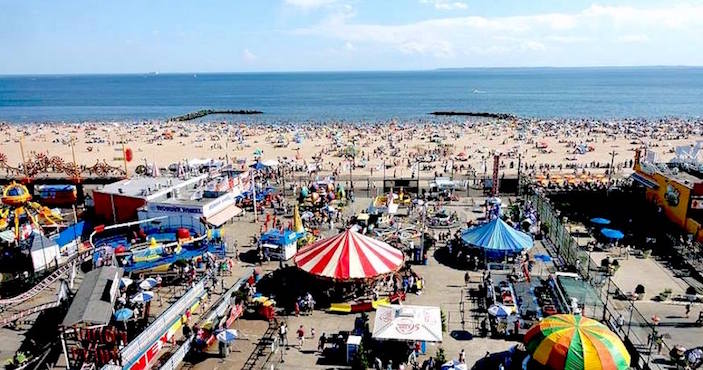 The fun at New York’s seaside amusement park extends to the shores of Coney Island Beach in Brooklyn, where thousands stake their umbrellas on sunny days. There’s plenty here to fill way more than a day between all the rides, catching a concert at the new Ford Amphitheater and a classic circus sideshow, plus the sights along the Boardwalk. Be sure to try New York’s original hot dog at Feltman’s (but also the one at Nathan’s for comparison), grab a pint at Coney Island Brewery and end your day with a sweet treat at William’s Candy Shop.

How to get to Coney Island Beach: Take the B, D, F, N or Q train or ride to the end of the Ocean Parkway bike path 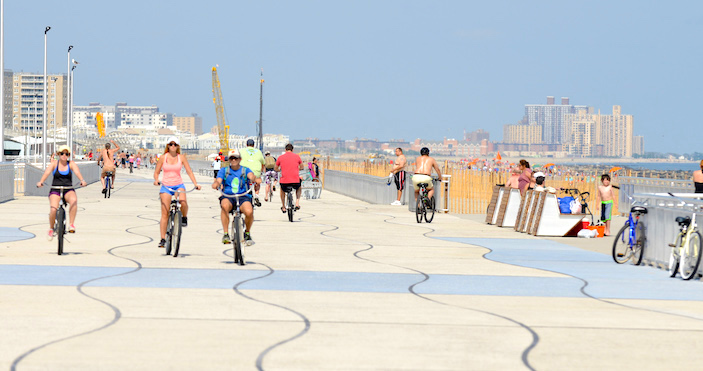 Though a popular stretch of Rockaway Beach has been closed for the summer, there are 4.5 miles of shoreline that still beckon you to this Brooklyn destination. Kids can alternate between splashing in the waves and playing their way across the beach’s seven playgrounds. For the grown-ups, Rockaway is also the only beach with proper conditions for surfing, and Surf Lessons New York will get you out on the waves (67-69th and 87-92nd streets). For food, find some of the best tacos in the city at Rockaway Beach Surf Club or try the backyard cookout fare at Rippers, then stay for live music on weekend nights at the beachside Caracas Arepa Bar.

How to get to Rockaway Beach: Take the A to the end of the line, or the J/Z to the Q52 bus. From Lower Manhattan and Sunset Park, take the NYC Ferry. 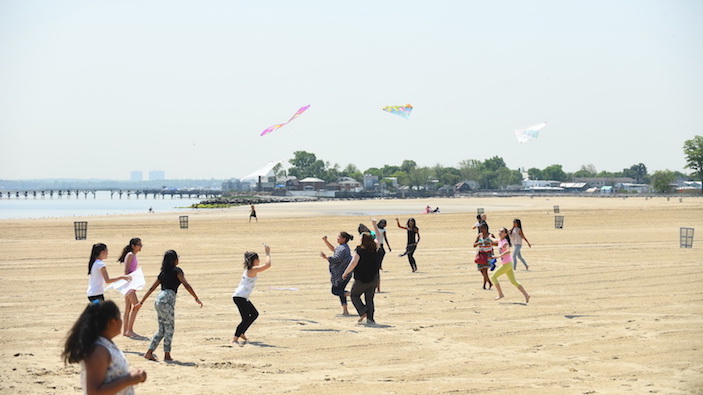 The so-called “Riviera of the Bronx” sits along the 1.1-mile inlet of Pelham Bay, where the recreation goes way beyond the gently splashing waves. Orchard Beach has 26 courts for basketball, volleyball and handball, as well as two playgrounds and barbecue facilities, with changing areas and showers. Keep an eye on the Parks website for a schedule of events like a free summer concert series and activities like canoeing with the Urban Park Rangers. 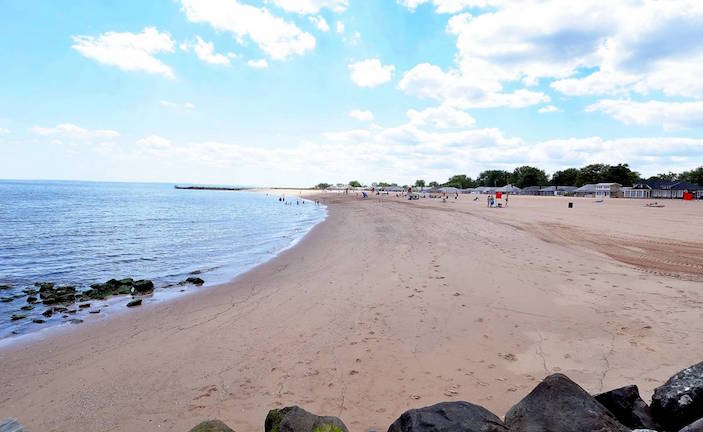 What used to be the wrongly presumed private playground of the Staten Islanders living in the beach bungalows along the shore has become one of the borough’s best semi-hidden secrets. Cedar Grove Beach is a hit with those looking for a cleaner, quieter day on the seaside away from South and Midland beaches. There’s only one lifeguard on duty, so the designated swimming area is not as wide as the beach, but the tranquility and lack of crowds should make up for the inconvenience.

How to get to Cedar Grove Beach: Take the Staten Island Ferry, then the SB86 bus right to the sand 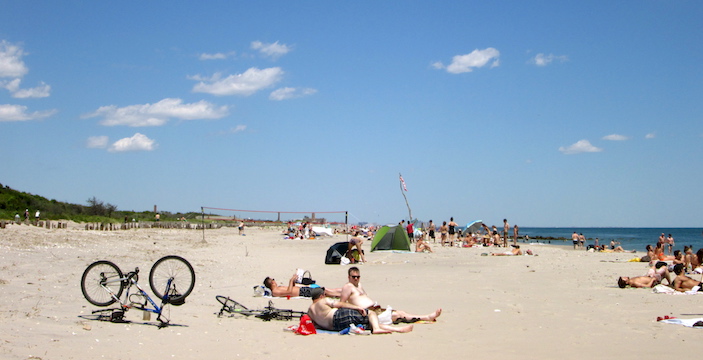 Come for the solitude and history at Fort Tilden Beach, possibly the only national park where topless sunbathing is common (though that’s your right on any beach in the city). The Queens beach is part of a 26,000-acre federal recreation area, so there’s nothing but fine white sand as far as you can see — and not much else, so bring your own food and drinks, and note that there’s no lifeguard on duty. The fort was built in 1917 and now hosts tours as well as art exhibits; the surrounding area also has several nature walks.

How to get to Fort Tilden Beach: By ferry from Pier 11; the 5 train to Flatbush Avenue-Brooklyn College and transfer to the Q35 bus towards Riis Park, but request a stop at Fort Tilden; ride your bike to the end of Flatbush Avenue and over the Marine Parkway Bridge 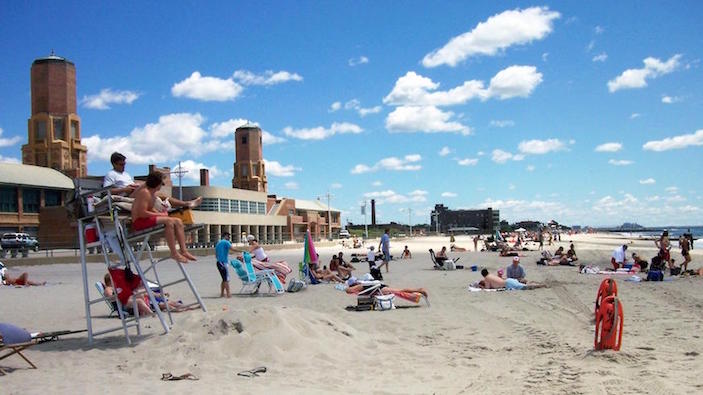 The hippest of New York’s sands, Jacob Riis Park Beach in Queens has spawned its own summertime Beach Bazaar with concession stands by Rockaway Clam Bar, Fletcher’s BBQ and Ample Hills Creamery among many others, with free concerts by local bands. Swing by the Art Deco bathhouse built in 1932, which now holds art exhibits, or just enjoy the mile-long beach prized for its calm vibes with beach chair and umbrella rentals available from the bazaar.

How to get to Jacob Riis Park Beach: Take the 2 or 5 to the end of the line then hop on a Q35 bus, or the A to a Q22 bus. From Lower Manhattan and Sunset Park, take the NYC Ferry to 108th Street, then take the Q22 bus down the beach. 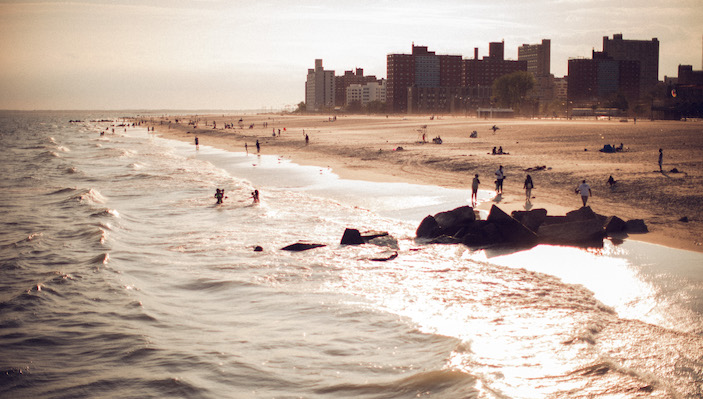 Walk east of Coney Island and you’ll run into one of the city’s last true Eastern European enclaves, where it feels like the clock stopped sometime in the ‘70s. Known as Little Odessa, Brooklyn’s Brighton Beach retains its Russian heritage with bakeries, restaurants and little shops just steps from the sand for the most unusual but delicious beach picnics.

How to get to Brighton Beach: Take the A to the end of the line, or the J/Z to the Q52 bus. From Lower Manhattan and Sunset Park, take the NYC Ferry.