Finally, some good news! The relaunched “Mystery Science Theater 3000,” which hits Netflix today, isn’t a shadow of its former self.

Based upon trusted reports, it’s like reuniting with old friends, even if technically those friends are completely different: The host is new (“Nerdist” podcast guru Jonah Ray), and so are the voices behind bots Tom Servo and Crow T. Robot (Baron Vaughn and Hampton Yount). But the vibe of wiseacres cracking their way through obscure, god-awful old cheapies remains the same. It’s like “Star Wars: The Force Awakens,” only with refreshingly chintzy production values.

Before we plow through the new episodes — preferably in a group, as this show about three people watching movies only improves when you add even more chuckling bodies — let’s take a look back at the old series, which ran on various stations from 1988 through 1999. That’s almost 200 episodes — some 300 hours of cinema at its worst (or best, depending on your worldview). Here are our personal picks for peak “MST3K”:

“Mitchell” (aired Oct. 23, 1993)
The ideal “MST3K” film is made by and stars nobodies. But every now and then you’d see a familiar face. Such was the case in this 1975 drive-in thriller — a vehicle for slovenly character Joe Don Baker, a slimy staple of proper films like “Fletch,” “Cape Fear” and semi-recently “Mud.” (He was also in three Bond films, as two different characters: He’s one of the villains in “The Living Daylights” and plays Bond’s joke-cracking American contact in “GoldenEye” and “Tomorrow Never Dies.”) “Mitchell” boasts one of his rare lead turns, and he’s hilariously unsuitable for the job. Highlights include Team “MST3K” mocking a bizarrely slow car chase (“Hot! Merging! Action!”) and a love scene that includes Baker grabbing a brewski mid-coitus — with his toes.

“Manos: The Hands of Fate” (aired Jan. 30, 1993)
Arguably the pinnacle of “MST3K” finds them peeping arguably their craziest film: a no-budget amateur horror film made in 1966 by El Paso insurance and fertilizer salesman Harold P. Warren. The plot involves a family running afoul of a murderous pagan cult and their unusual henchman, Torgo. Making movies is hard, and “Manos” — the Spanish word for “hands,” meaning the title is really “Hands: The Hands of Fate” — is a beautiful illustration of what happens when a regular Joe tries, and fails, to replicate the feel of a real movie. The pacing is astonishingly slow, with so many dead spots that our crew, with nothing to make fun of, just start reciting the title over and over again like a mad mantra. Since “MST3K” dug this oddity up, it’s become a kind of avant-garde cult classic; super-fan Quentin Tarantino apparently owns a gorgeous 35mm print.

“Space Mutiny” (aired Nov. 8, 1997)
What happens when other countries try to imitate Hollywood? Sometimes they look like “Space Mutiny,” a 1988 sci-fi starring a ripped rando (Reb Brown), very poor fake facial hair and laser guns that wouldn’t cut muster on the original “Battlestar Galactica.” In fact, those space shots? Lifted directly from “Battlestar Galactica” itself. There are untold peaks here, but our favorite is a part where a minor character is murdered, and then two scenes later she’s clearly in the background of an establishing shot. Whoops!

“Werewolf” (aired Apr. 18, 1998)
Is that Martin Sheen bopping about this DTV lycan entry? No, it’s Joe Estevez, the actor’s brother, who’s made a career out of loaning himself out to films and TV shows (and commercials) that wish they could get Martin Sheen but can’t afford him. He has a minor role in this bizarre failed horror movie, whose best part involves a bitten man (very poorly played by co-writer/director Tony Zarrindast) who turns into a werewolf while driving a car.

“Santa Claus” (aired Dec. 24, 1993)
The gang did the notoriously abrasive children’s film “Santa Claus Conquers the Martians” back in 1991, but our money is on another, way freakier Kris Kringle picture: A Mexican fantasy film in which a demon tries to destroy the man up north. It’s one of those episodes where the film is so bizarre the jokes laid on top of it are almost superfluous. You’re grateful they found it. 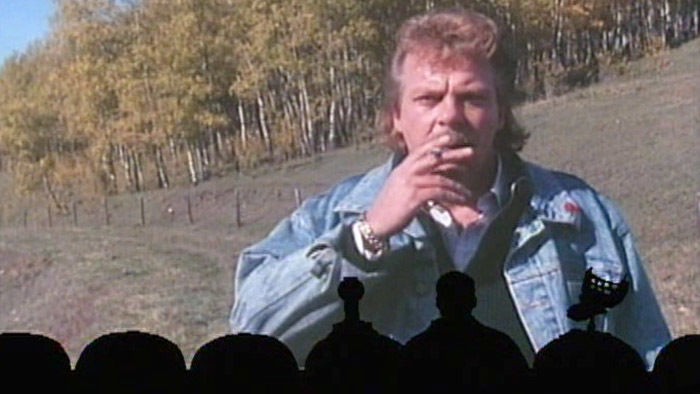 “The Final Sacrifice” (aired July 25, 1998)
There are countless incredible bits in this cheapie Canadian thriller, in which a teenage boy battles a pagan cult with the help of our favorite outside-the-box movie hero — even moreso than Joe Don Baker in “Mitchell.” He’s an unkempt hoser who runs out of breath during chase scenes. And his name? Zap Rowsdower. Our favorite bit, though, finds our heroes happening upon a mountain man who looks like Ian Anderson of Jethro Tull and sounds like Dr. Teeth from the Muppets.

“Future War” (aired Apr. 25, 1999)
The bulk of “MST3K” episodes excavate the cinema of decades past, but occasionally they’d get their hands on something new. Such was the case with this 1997 DTV sci-fi thriller, which was only two years old by the time our team eviscerated it. Starring never-was muscle man Daniel Bernhardt, it finds a cyborg journeying to the modern day and battling time-traveling dinosaurs that look like rejected “Land of the Lost” toys. But there’s so much more.

“Time Chasers” (aired Nov. 22, 1997)
Other times they’d find newish films that barely opened in theaters and would have otherwise been consigned to movie purgatory. Thank god they found “Time Chasers,” which played a total of 12 random theaters in 1994 and has all the aesthetics of “Manos: The Hands of Fate” — this, despite being a movie that jumps back to the 1950s and forward to 2041. It’s more than a bad movie — it’s endearingly bad, a passion project from nobodies who wanted to make it big but didn’t have the money nor the talent. “MST3K” is often charged with ironic mockery, but their digs at “Time Chasers” run deeper than that. They almost admire this terrible, terrible movie and are glad it exists.

‘Teen-Age Strangler’ (Nov. 7, 1993)
Oh, the regional drive-in movie. It’s an art that’s mostly died by now. But the films it produced live on thanks to the likes of “MST3K,” who somehow found this low-budget mystery about a brooding teenage hulk who’s mistakenly pegged as a small town serial killer. This has some of the team’s most obscure jokes, including a shout-out to Steve Reich’s “Music for 18 Musicians.” Plus, there’s our unfairly maligned hero’s sissy brother, who at one point joins his sibling’s hysterical girlfriend in one of the craziest crying jags in film history.

“Warrior of the Lost World” (aired July 24, 1993)
Every original blockbuster births an army of cheapo copycats. And so it was that “Mad Max” (though moreso its sequel, “The Road Warrior”) inadvertently spawned untold ripoffs. One of those was this 1983 Italian nonsense, starring Robert Ginty — known primarily for being on the TV show version of “The Paper Chase” — plus Donald Pleasance, plus Fred Williamson, plus Persis Khambatta, the Indian beauty famous for shaving her head for “Star Trek: The Motion Picture.” This is one of the best episodes where the gang keep a healthy array of running gags going throughout the movie, including repeatedly calling one supporting actor “Jimmy Carter” — because he does indeed look like Jimmy Carter.