A brief history of the Nicki Minaj Cardi B beef Years from now we will all be asking each other this pointed and profound question: “where were you when Nicki Minaj and Cardi B finally threw down at New York Fashion Week?” There is no doubt that the fight between the two current queens of New York hip-hop will go down as one of the wildest occurrences to ever happen at the esteemed event. But, what exactly lead us to this point? As it turns out, the Nicki Minaj Cardi B beef has had a long winding road to get to where it is today so we thought it would be a good idea to unpack the whole thing. Here is a brief history of the Nikki Minaj Cardi B beef.

It has been debated by many as to when the whole thing actually started. But as Complex reported, things had been pretty civil in the beginning as Nicki had been supportive of Cardi B during her meteoric rise to rap-legend status. There had been few instances where people believed that both rappers had targeted each other in different verses, but those rumors were quickly put to bed by both Nicki and Cardi. Upon the release of her smash hit “Bodak Yellow” back in September of 2017, Nikki Minaj even took to Twitter to sing her praises and show support for the song becoming only the second No. 1 hit single on the Billboard chart by a black female artist. “Congratulations to a fellow NEW YAWKA on a RECORD BREAKING achievement,” Minaj wrote, adding “Bardi, this is the only thing that matters!!! Enjoy it.”

Congratulations to a fellow NEW YAWKA on a RECORD BREAKING achievement. Bardi, this is the only thing that matters!!! Enjoy it??? @iamcardib

It seemed as though the two were showing signs of a beautiful friendship. But things started to take a turn for the worse when they both guested on the Migos song “Motorsport” back in October of 2017. Although both of their verses seemed civil in the finished project, rumors of the Nicki Minaj Cardi B beef began to simmer as it was clear that the two were not on the same shooting schedules when it came time to shoot the video for the song. When asked, Minaj said it was a simple scheduling conflict with both of their hair and makeup teams that prevented them from being on set together at the same time. But when Cardi B was asked about the whole situation on Capital XTRA, she remembered it a little bit differently. Cardi seemed to not recall the whole experience in the best way and even alluded to the fact that Nicki’s verse had been changed at the last minute.

This did not make Nicki Minaj happy. The next day she fired back with a tweet directed at Cardi B saying “The corniest thing you can be is ungrateful. Give thanks.”

The corniest thing you can be is ungrateful. Give thanks.

From then on, the Nicki Minaj Cardi B beef went to threat level midnight. After Cardi released her album Invasion of Privacy, she began to walk back that famous “Motorsport” interview by saying that the press had fabricated this feud and that it was being blown out of proportion. As much as a step in the right direction that was, Nicki still seemed hurt by the whole thing telling Zane Lowe on his Beats 1 radio show that she “really fully supported her and up until this recent interview I had never seen her show me genuine love in an interview,” adding “I can just imagine how many girls wish they could have been on a song with Nicki Minaj. I’m not saying it in a cocky way.”

Nicki Minaj Cardi B beef: Revenge of the Queen 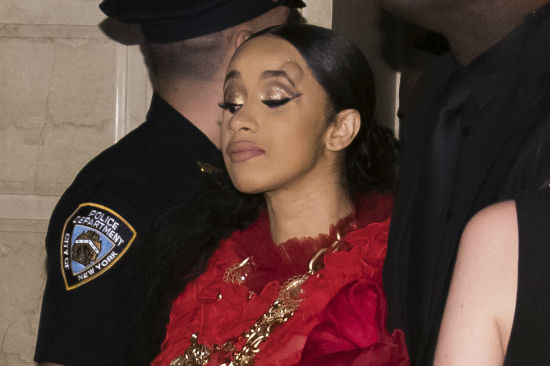 Cardi B with a bump on her head after the fight at NYFW. (Photo by Charles Sykes/Invision/AP)

This brings us up to 2018 when Nicki Minaj released her long-awaited album QUEEN back in August. Fans were wondering if she would take aim at Cardi B or just let it go. But upon hearing the opening track “Ganja Burns”, everyone knew the Nicki Minaj Cardi B beef was just heating up. Nicki started sharpening her cleaver with this song as she rapped “unlike a lot of these hoes whether wack or lit/At least I can say I wrote every rap I spit,” addressing the rumors that Cardi had hired ghostwriters to help her with her songs.

Months had gone by with little but speculation that the two were still feuding. But then, all hell broke loose. The two met at a Harper’s Bazaar Icons event at New York Fashion Week and the gloves  — or in this case, a shoe — came off. Something was said between the two and Cardi B went after Minaj. The scene spiraled into pandemonium and the two were separated by security after the first few blows were thrown and Cardi B flung one her shoes at Minaj.

Headlines of the fight had flooded the internet as the Nicki Minaj Cardi B fight had solidified what fans had suspected all along. These two just simply do NOT like each other. Minaj talked about it the next day on the Queen Beats 1 radio show to express how mortified she was after the whole thing and to dispell any rumors that she had called Cardi B a “bad mother” to her newborn baby daughter Kulture. “The other night I was part of something so mortifying and so humiliating to go through in front of a bunch upper echelon… people who have their life together,” she said. Adding “I just want to let the world know that Onika Tanya Maraj, would never—has never and will never speak ill of anyone’s child … I am not a clown. That’s clown shit. and the other thing that’s clown shit is telling the world that someone said something just so that you don’t feel f-cking dumb for looking dumb for doing dumb sh-t”

As for Cardi B, she held strong with an absolutely scathing Instagram post that read … well, we’ll let you see for yourself…

TMZ has also reported that since the fight, Cardi B claims that Minaj did attack her parenting skills and feels no remorse for going after Minaj the way she did. They also report that Cardi believes that if the two happen to be in the same room again, she might throw the other shoe.