Australian 'Dr. Death' creates 'suicide machine' that could be available in 2018 - Metro US
The Big Stories

Australian ‘Dr. Death’ creates ‘suicide machine’ that could be available in 2018 An Australian doctor nicknamed “Dr. Death” just developed a suicide machine many are dubbing the “death pod.” He calls it “the Sacro,” and it has the world up in arms.

Dr. Philip Nitschke, 70, built this machine in the Netherlands where assisted-suicide for terminally-ill adults has been legal since 2002. This 3D-printed “coffin” uses canisters of liquid nitrogen to ultimately end a life. After a minute and a half inside, a person feels disoriented, then loses consciousness. It takes about five minutes to pass away, but if you change your mind during the process, there’s an emergency window for oxygen as well as a reachable “stop” button.

Access to the Sacro is only given to those who pass an online questionnaire to ensure they meet certain criteria such as “being sane of mind.” Nitschke futher ellaborated in an interview with VICE: “Depression is not an excluding factor when it comes to use of the Sacro. But if you’re depressed or physically ill to the point that you don’t know what you’re doing, you won’t pass the test and Sarco is not an option for you.”

According to Nitschke, the first Sacro will be built legally in Switzerland. He hopes blueprints will be available online by 2018 and that it can be printed anywhere, anytime. “There might be people who abuse the Sacro or particular drugs, but there are also a lot of people who will benefit,” the doctor claims.

Nitschke was reportedly the first doctor in the world to give one of his patients a legal deadly injection. That was in 1996. A year later he founded Exit International, an organization promoting euthanasia and assisted suicide. His book, Peaceful Pill Handbook, provides information on where these end-of-life options are legal, what forms they come in —pills, poisons, etc. — and who they are available to.

Newsweek reports that Nitschke has devised other death machines in the past — one he called “the Deliverance,” consisting of a laptop and IV system, another he called an “exit bag,” a breathing mask that expelled carbon monoxide. 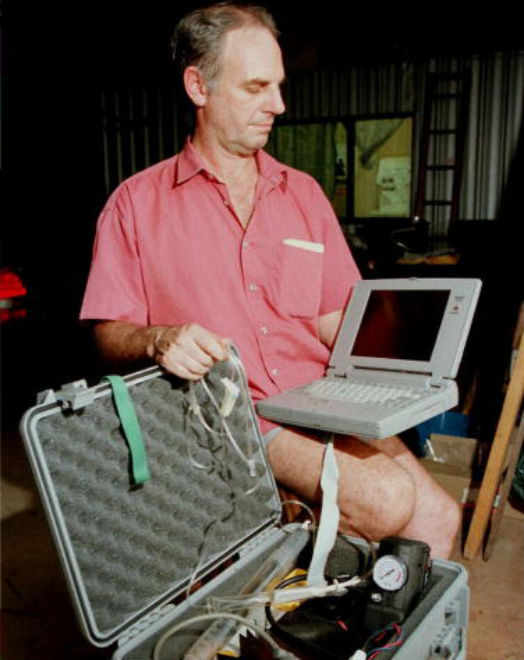 Though Philip Nitschke is nicknamed “Dr. Death,” he wasn’t the first to earn this title: the most famous is pathologist and assisted suicide activist Dr. Jack Kervokian, who administered well over 100 of these procedures to end patients’ suffering before passing away in 2011. His experimentations with “death machines” seemed unnatural to many, teetering on the edge of the law.

Kervokian served eight years in prison for charges of second-degree murder in 1999 after “60 Minutes” broadcasted a video of him injecting lethal drugs into a man with Lou Gehrig’s disease. Long before this, however, he was close to prison several times due to his controversial work. This specific case caused national concern because Kervokian was administering the euthanasia himself to a patient who was seemingly incompetent. For Nitschke, Kervokian’s work has been a major influence.

Assisted suicide, or as many doctors prefer to call it, “assisted death or dying,” “aided dying” or “death with dignity,” differs from voluntary euthanasia. In euthanasia, the doctor hastens a terminally ill patient’s death him – or herself. In assisted suicide, the patient is given control. In typical cases, a licensed physician gives their patient a prescription to take at home.

The Death with Dignity website defines assisted suicide as follows: “An end-of-life option that allows certain terminally ill people to voluntarily and legally request and receive a prescription medication from their physician to hasten their death in a peaceful, humane and dignified manner.”

Today, assisted suicide is legal in countries like the Netherlands, Belgium, Colombia, Switzerland and in parts of the U.S. According to the Death with Dignity site, as of February 20, 2017, these states include California, Colorado, Washington, Vermont, District of Columbia and Oregon, whose Death with Dignity Act has been effective for over 18 years. In Montana, it is legal by State Supreme Court ruling.

The Boston Globe reports that medical societies in Maryland, Maine, Minnesota and Nevada have ended their opposition to assisted suicide. Just last week, the Massachusetts Medical Society dropped its long-standing opposition to it, agreeing to take a neutral stance on the policy.

Those eligible for this end-of-life option in the U.S. must be 18 and able to adminster the drugs themselves, a resident of a state where it’s legal, “mentally competent” and diagnosed with a terminal illness that will result in death within six months.

The process consists of a series of request forms and screenings to determine whether or not a patient is qualified. By law, more than one doctor must sign off on a diagnosis before lethal drugs can be prescribed.

Dr. Haider Warraich, a fellow in cardiovascular medicine at Duke University Medical Center, told Metro that the very term “assisted suicide” is controversial because people equate it with being suicidal. Warraich, who authored the book Modern Death: How Medicine Changed the End of Life, said that “it would not be surprising” if terminally ill patients were depressed, but stressed that if their physician concluded they were in fact suicidal, he or she wouldn’t prescribe them these lethal drugs in the first place.

Many argue that under the right circumstances, ending your suffering when death is inevitable is the best way to go (hence, “death with dignity”). It’s deemed better than letting a patient wither away in agony. Nitschke, in a more radical and controversial view, believes it’s everyone’s right to apply for this type of death, not just the terminally ill. (That being said, those with potential access to the Sacro would still have to qualify.)

Warraich told Metro that just having assisted suicide as an option “makes end of life better,” because these people take comfort in knowing they have more control over their terminal fate if need be. “It makes the process more humane and more human-centered,” he explained.

Warraich also pointed out that only a “small amount of patients” actually go through with assisted suicide. In the 18 years that Oregon’s Death With Dignity law has been in effect, 1,545 people have requested lethal prescription, 35% of which have never used it.

“I believe in having patients have the option in case they want this,” Warraich said. “If a patient wants this option, I will be supportive of that.”

What physicians and experts think about the Sacro

There is, in the end, one looming question: what if it gets into the hands of the wrong person? Dr. Ronald Willaim Maris, Ph.D., a forensic suicidologist and proclaimed suicide expert, doesn’t think the Sacro is a threat. “I doubt that having a suicide machine will affect the suicide rate much,” he told Metro. As it is, there are countless options available for someone who wants to commit suicide, and even still, he explained, suicide is rare: about 1 in 10,000. Having access to one more option, therefore, wouldn’t change anything.

“Looking briefly at this process, physicians should [still] be wary,” Warraich told Metro, stating that the most important thing is “making sure whatever you do, it’s in the realm of law.”

From what Warraich could tell, the Sacro is giving the assisted suicide movement bad press. “For me, the key thing is a lot of times people who are opposed to assisted death will use something like this to make the entire movement grotesque,” he said, “rather than really focusing on the laws that have been passed and the patients that have benefited from them.”

“My own sense,” Warraich concluded, “is we can’t lose focus on the big picture that there is a place for assisted death for patients who may need it.”