Banksy returns to NYC — where to find his new works

A rat doesn’t attract attention from New Yorkers — that’s of course before we realized it’s a Banksy.

The new work at 14th Street and Sixth Avenue on the facade of an old bank slated for demolition has indeed been confirmed on the impressively still anonymous artist’s Instagram.

Now that we know the piece is really by Banksy, the question is what does it mean?

The obvious reference is to the rat race of life in New York City, where we all have to run in place just to survive.

Or does the rat represent the city itself, put on a clock as a statement about how time is running out for the five boroughs as we face serious problems both long-term — rising sea levels because of climate change — and short-term in the MTA’s failure to make the subways run properly.

Or is it merely a lament for the New York City rat, the truest New Yorker (save, perhaps, the pigeon) that is nonetheless maligned by its human colonizers?

While you parse that, Banksy also took credit for a mural that went up on the Houston Bowery Wall that’s much more direct: 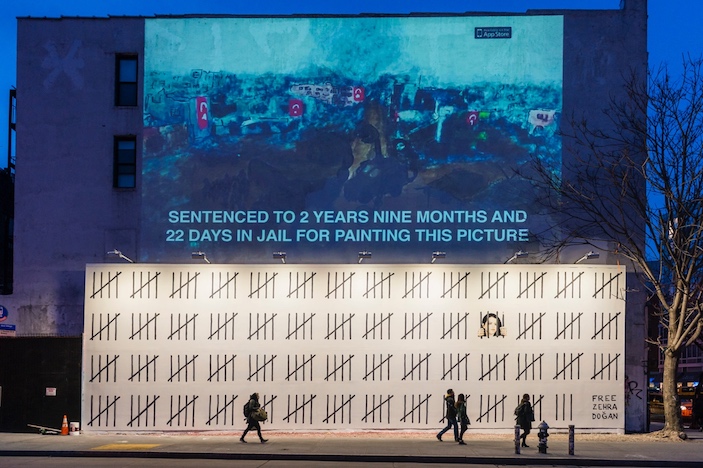 The work, painted on the same wall that Keith Haring made famous in 1982 at the corner of Houston and Bowery streets in the Lower East Side, depicts a prison wall with tally marks and the face of Turkish artist Zehra Dogan. She was arrested for painting a watercolor of the Kurdish town of Nusyabin after it was bombed by Turkey as part of its decades-long campaign to suppress Kurdish calls for an independent Kurdistan.

Dogan is drawn behind bars, with the final bar changed into a pencil, with the words “Free Zehra Dogan” at the bottom of the mural. Banksy’s work is timed to coincide with the first year of her prison term; two years, nine months and 22 days.

Could these works be part of another residency like in 2013, when Banksy spent the entire month of October sprinkling works around the boroughs every single day?

We don’t know yet, but New York is officially back on Banksy Watch. And you better be looking at more than just walls.

As part of the artist’s New York City residency in the fall of 2013, he set up a table among the many artists on the tourist-heavy stretch of Fifth Avenue from the southeast corner of Central Park to the Met Museum.

The salesman — or even Banksy himself, who knows! — sold the paintings for as little as $30, thanks to one woman’s ruthless haggling. Just six works found buyers after four hours for a total of $420. The Guardian estimated the works to actually be worth $195,000.

In another instance, a painting Banksy hijacked, then re-gifted with his own modifications to the charity organization Housing Works ended up selling for $615,000. Constant vigilance, people!

Welcome back, Banksy. The city is more exciting with you in it.